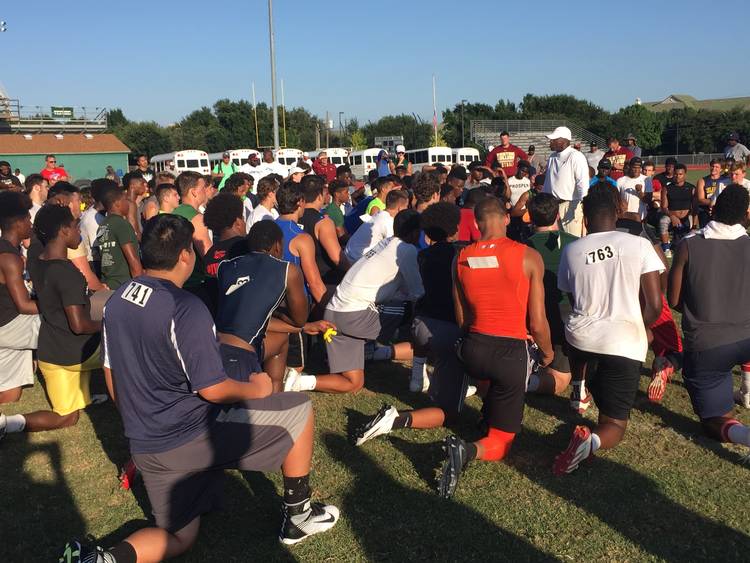 Texas coach Charlie Strong talks to the athletes who attended UT's satellite camp on Friday at The Greenhill School in Addison, Texas, on July 17, 2016. (Brian Davis/American-Statesman)

ADDISON — Whether they like it or not, college coaches have morphed into traveling gypsies this summer, shuffling to far-flung locales for satellite camps.

Jim Harbaugh is having an absolute ball crisscrossing the countryside while Nick Saban is predicting the apocalypse.

In the end, it’s savvy marketing, nothing more. Maybe coaches find a hidden gem, maybe not. Thursday’s satellite camp in the Houston area wasn’t particularly notable, for example. Each camp is truly a hit-or-miss proposition based on who shows up.

From that standard alone, Texas’ satellite camp on Friday at The Greenhill School must be considered a success. There were multiple players there wanted by Texas’ rivals. The entire UT coaching staff, which paired up with some assistants from Boston College, had them exclusively for a two-hour workout.

“We’re gonna coach you the way we do it,” Strong told campers before kickstarting a typical college-level workout in searing North Texas heat. “Someone paid for you to come here. You don’t want to waste their money. Don’t waste our time.”

Arlington Lamar defensive tackle Bobby “Tre” Brown, a rising junior who already holds offers from Oklahoma and Houston, sure came to impress. Brown said this was an opportunity for “experience and exposure.”

“All these students are not going to get offered a scholarship,” said Brown’s mother, Erica, a supervisor at a juvenile correctional facility in Granbury. “But all of them leave with hope. And hope can carry you a long way. That can push you even farther. I wish I could take him to a camp every week this summer.”

Strong spent extra time with rising senior Dayo Odeyingbo, a Carrollton Ranchview defensive end who has at least 17 scholarship offers from schools like Michigan, Oklahoma and Texas A&M. When Odeyingbo return to his position group, he was swarmed by other campers. What’d he say? Tell us exactly what Coach Strong said, he was told.

Odeyingbo, a three-star athlete standing 6-foot-4, knows coaches can find him. These satellite camps are worth it for others. “I think it’s been good for a lot of guys who go to smaller schools and don’t get a lot of looks,” Odeyingbo said.

Take Kenny Nelson, for example. The Frisco Centennial tight end, a rising senior, has offers from Jackson State and Lamar. But anyone who saw Nelson in the one-on-one drills would jot down his name as one to watch this fall. Nelson twice made sensational grabs, including one against Verone McKinley III, a standout defensive back from Plano’s Prestonwood Christian.

One of the best players at the event stood on the sidelines. Plano West linebacker Mohamed Sanogo was named the MVP at his position during The Opening regional event in March. He didn’t have the $40 entry fee, but Sanogo’s father told him to get to Greenhill so the Texas coaches know he’s interested.

Sanogo, who attended UT’s junior day, does not have a scholarship offer from the Longhorns. But he wants to attend the school’s Under the Lights recruiting event next month.

“They’re not going to offer you based on the satellite camp,” said Sanogo, who talks with UT linebackers coach Brian Jean-Mary. “But they’re looking at this thinking, ‘OK, who do we need to watch during the season.’ ”

The UT coaching staff was watching probably closer than the campers think. At one point, Traylor told a receiver, “I like that! I can coach you!” Offensive line coach Matt Mattox and defensive line coach Brick Haley both talked to their charges individually after one-on-one drills. Every other coach routinely pulled players aside for instruction, even those who don’t pass the eye-ball test.

As commercials go, it was the best two-hour advertisement for Texas Longhorns football possible.

“If you don’t believe in yourself, nobody is gonna believe in you,” Strong said to the group afterward. By NCAA rule, he is not allowed to speak directly to the media at these events. “Go be the best person, and good things will happen to you.”

UT’s Scottie Scheffler takes the day off after historic Thursday