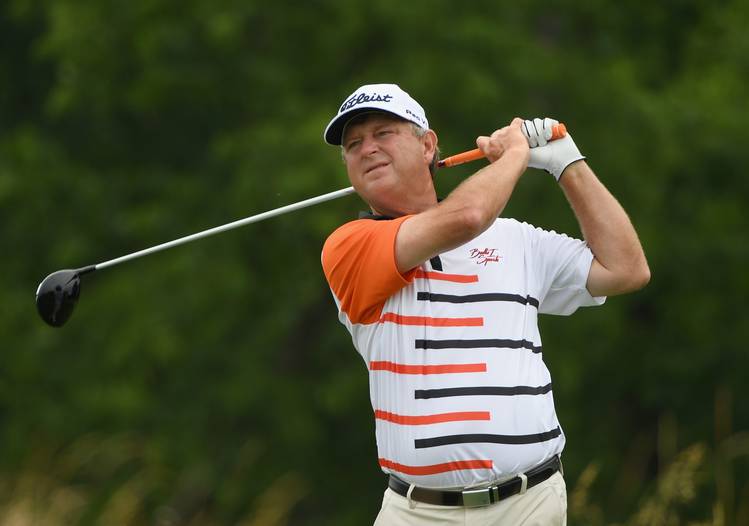 Wes Short plays his shot from the fourth tee during the first round of the U.S. Open at Oakmont Country Club on June 16, 2016 in Oakmont, Pennsylvania. (Photo by Ross Kinnaird/Getty Images)

“It’s nice to be on this side of the ropes and being watched on TV instead of doing all the watching,” the former Longhorn said. “Then you experience it to see how hard it really is. The TV sometimes doesn’t do it justice because it doesn’t always look that hard.”

But make no mistake, this one was hard. Short ended up shooting 78 and 76 for a total of 14-over and missed the cut, though he did end up beating 23 of the 156 players in the championship. Not bad for a 52-year-old PGA Tour Champions player who was the oldest in the field at Oakmont.

Until last week, Short, had never set foot on Oakmont and he ended up playing nine-hole practice rounds each day Monday through Wednesday to get acquainted.

On Monday, the Austin resident got to share a practice round with a fellow Austinite — and one of the nation’s best college golfers — in Texas golfer Scottie Scheffler. The twosome, separated by 33 years, enjoyed a friendly round.

“That was pretty neat; all them kids hit it a long way,” Short said. “It was a lot of fun to play with him. He’s a very good player, very strong, he hits it so far and it doesn’t look like he puts that much effort in the swing and you get up there and his ball is way in front of me.”

The experience for Scheffler was also a pleasant one. With all the slopes in the fairways and rolling hills the group had to climb, did the young buck ever need to help pull the veteran up a hill?

“No, he was pulling me along,” Scheffler joked.

Short had watched Scheffler and his UT teammates go for the NCAA title last month and cheered his alma mater on as they came up short.

“I enjoyed watching the matches on TV and I think Texas would have won it had Beau (Hossler) not gotten hurt, but they gave it a good fight and that’s all you can do,” Short, Jr. said.

Short remembers embarking on his U.S. Open quest at age 18 at San Antonio Country Club for a local qualifying round and getting all the way through to sectionals that year in Houston before coming up shy of the mark. This year Short got through local qualifying and tied for seventh at Wedgewood Golf & Country Club in Columbus, Ohio for one of the 13 available spots in a field of 103.

“The course makes you pay for every bad shot,” Short said. “Overall it’s the first Open and it was a little tougher than I thought it was going to be and the greens were very hard. There was a real premium on hitting fairways, more than I thought.”

Short now has a couple weeks off before his PGA Tour Champions schedule gets going again.