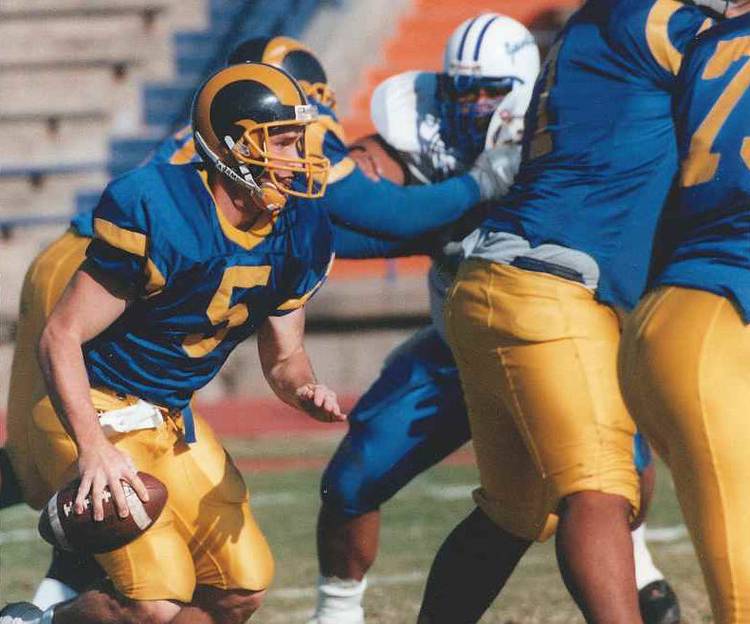 Texas offensive coordinator Sterlin Gilbert was a crafty quarterback during his time at Angelo State from 1999 to 2001. (Photo by Angelo State University athletics)

SAN ANGELO — For some unexplainable reason, mythical sports figures seem to emerge from San Angelo, an oil and agricultural hub in the Concho Valley about three hours west of Austin.

For example, Jim Morris was an area school teacher who became the oldest rookie in baseball at age 35. The left-handed reliever’s story was so incredible, Hollywood made a movie about it — “The Rookie.”

Pierce Holt didn’t care much for football in high school. He got married after graduation, worked some odd jobs and then, at age 22, decided in what-the-heck style to enroll at Angelo State. Holt later won two Super Bowls with the San Francisco 49ers and is now a member of the College Football Hall of Fame.

The Gilbert family has achieved mythical status itself in this pocket of West Texas. Allen Gilbert has been a well-known municipal court judge since the 1970s. His oldest son, Brady, was a high school coach who left teaching but still maintains an active community profile.

And then there’s Sterlin Hampton Gilbert, who spent his entire youth and formative years “playin’ in the dirt in San Angelo.” You want to see the locals swell up with pride? Go around San Angelo asking if this 37-year-old native son is the right coach to lead Texas’ offensive renaissance.

“If you’re looking at the football-crazed world of Texas, you’re sitting there looking and saying, here’s this guy, he’s got the chance to save Texas,” said Greg Stephens, a longtime family friend who played quarterback at Angelo State. “That’s what we hope he does.”

Saving the Longhorns? Go ask Gilbert about this and watch his head snap back. “Awww, c’mon now,” he said with a laugh.

But in reality, that’s exactly what Gilbert must do. Texas coach Charlie Strong and his first-year offensive coordinator are in the soup together — both are facing the biggest season of their professional lives.

There’s a real possibility this December that Strong will receive a contract extension or be fired. The answer lies in whether Gilbert can pick a quarterback, successfully implement a spread offense and, frankly, coax the Longhorns into scoring some points. UT had the Big 12’s second-worst scoring offense in 2014 and third-worst last season.

The Gilberts don’t seem too worried about anybody’s job status. To outsiders, it certainly appeared that way last December when Gilbert left Austin without agreeing to a contract.

School president Gregory L. Fenves had to get on a plane, fly to Tulsa with a UT contingent and convince Gilbert to come to Austin. Asked why he did that, Fenves told the American-Statesman earlier this month, “You know, I get asked this question a lot.”

The family interpreted Fenves’ presence as a show of support for Strong and the football program. “It was different. Surreal, to say the least,” said Brady Gilbert, Sterlin’s older brother. “I don’t think it was a personal deal, I think it was the university’s commitment to athletics.”

University leadership is all in, and so is Sterlin Gilbert. He’s got such whole-hearted conviction in his approach, it’s bound to work, right?

“It’s about strong belief,” Gilbert said. “Believing in what you do. I don’t let my mind go there with that F-word — failure.”

Brady Gilbert said, “Every word that comes out of his mouth, every bit of motivation, positive criticism, he believes it’ll make every single individual better.”

Gilbert’s high school coach also believes Sterlin is more than ready for the often scorching-hot spotlight that shines on UT’s No. 1 playcaller.

“Sterlin’s going to handle that responsibility well,” said Kyle Gandy, the former San Angelo Lake View head coach who now lives in Georgetown. “I don’t think that’s going to be a problem. He understands what he wants to do. He has a plan to get it done.

“Those quarterbacks (at Texas), they’re going to know what they need to do and not have to think about it. They’ll react and make plays.”

Football is really all Gilbert has ever known. He was a ball boy in elementary school for Ben Norton, a legendary San Angelo high school coach. He later served as a pallbearer at Norton’s funeral. In various interviews over the years, Gilbert has said numerous times, “All I ever wanted to be was a Lake View Chief.”

When he interviewed for the head coaching job at Lake View, Gilbert brought a 15-page packet full of information about the program and its feeder middle school. He aced the interview and led his alma mater from 2008 to 2010. Preparation was the key, just as it was for Norton.

Now Gilbert’s life has come full circle. Growing up, Gilbert would always volunteer at the annual Angelo Football Clinic, a Mecca of sorts for Texas high school coaches. Stuffing envelopes, ferrying people to and from the airport, whatever was needed.

Last year, when Gilbert was the co-offensive coordinator at Tulsa, he finally made it onto the stage as a presenter. Earlier this month, he  was center stage, this time with the burnt-orange Longhorns logo embroidered on a black pullover.

“Leadership,” Gilbert said during an 80-minute presentation to several hundred coaches inside Angelo State’s Junell Center. “I think that’s something at the quarterback position, it’s a must. Your guys have to work extremely hard, and I truly believe those guys have to be vocal. I don’t think hard work in itself is just enough for your quarterback to do.

“Never give up on a player. He can always change. Give him a chance to either change his attitude or his abilities. Labels disable.”

For those looking for insights on Texas’ quarterback derby, Gilbert never once mentioned Tyrone Swoopes, Jerrod Heard or Shane Buechele. This wasn’t the place. That topic will be devoured in August.

Gilbert went into meticulous detail on footwork drills, the importance of maintaining an L-shaped throwing motion and how to “ignite the hip” on follow-throughs. He spoke at length about coaches thinking, acting and looking successful, for it portrays a certain image to players.

Gilbert said as a high school coach, he ordered shorts for his staff without pockets. He didn’t want coaches standing around with their hands in them. “What do I do with my keys, coach?,” an assistant asked. “Get a lanyard,” Gilbert answered. He never allowed assistants to drink coffee in the weight room, either. If players are being asked to work hard, coaches should be ready to help, he figured.

Gilbert hammered home the final point that coaches should, “Always know where the light switch is.” It dawned on him that he didn’t know who turned the lights on every day in the Texas weight room. If you’re always relying on someone else — to turn the lights on, for example — you aren’t fully prepared.

Of course, Strong has a reputation of getting to work sometime after 4 a.m., so it’s difficult to beat him to the office, Gilbert said.

Longtime Angelo State coach Jerry Vandergriff, who retired after the 2004 season but still organizes the clinic, shook his head in amazement after Gilbert’s presentation.

Asked if he was proud of Gilbert, Vandergriff said, “You reckon? You’re just so proud of them when they go on and, No. 1, they’re doing what they want to do and, No. 2, they’re successful at it. I just believe that you’re seeing the start of it.”

Gilbert made it clear that all Texas high school coaches were welcome inside UT’s facilities and practices. He did another 20-minute Q&A session afterward and thanked attendees again.

Allen Gilbert stood there happy to see his youngest son “fulfill what I’ve known to be his dream since he was a young man, even a young boy. That’s to be a coach. Yeah, he’s a UT, but he’s happy that he’s coaching and working with kids.”

As Gilbert left the arena floor, someone shouted out, “We love you!”

“It’s like walking around with William Wallace,” Texas tight ends coach Jeff Traylor said. “You ever seen the movie “Braveheart,” when they see him for the first time and say, ‘I thought you were 7-foot-6?’ Well, that’s what it’s like.”

Given how much Gilbert accomplished, you’d think he’d be taller, too. Alas, the Angelo State media guides at the turn of the century listed him at 5 feet, 10 inches tall.

Gilbert posted a 28-6-1 record as the starting quarterback at Lake View. He played for Vandergriff at Angelo State from 1998 to 2001. By all accounts, Gilbert was a bulldog, one who chewed up defenses with swashbuckling savvy (3,786 passing yards, 30 touchdowns) more than pinpoint accuracy (44.8 percent).

The Rams were back-to-back division champs in the Division II Lone Star Conference, and Gilbert finished his career ranked fourth in total offense at ASU. After his playing career ended, Gilbert went straight into coaching high school quarterbacks and running backs at Springtown.

Gilbert volunteered at Art Briles’ summer camp in 2003 and 2004 and landed a spot on the then-Houston coach’s staff in 2005. That’s where Gilbert learned the intricacies of the spread offense he’ll implement at Texas.

Gilbert honed and refined his approach at various high school stops, including back at Lake View in 2008 at age 29, and then on to Bowling Green, Tulsa and now Texas.

With Briles gone from Baylor, that program now has an uncertain future. But as Baylor’s head coach, Briles and his offense led the nation in scoring three straight years. The Longhorns would become instantly better if they could see their offensive output increase like that.

“I don’t want to approach it different than I’ve approached any job before,” Gilbert said. “We’ve got a job to do, we’ve got a scheme, we’ve got a way we treat kids and that’s what we’re going to do.

“Then you go out, you do that, you install it, you fit it with coach Strong and his philosophy, his core values, our defensive scheme and put it all in there. Kids work hard, and you go out every Saturday and lay the chips on the table and see where they fall.”