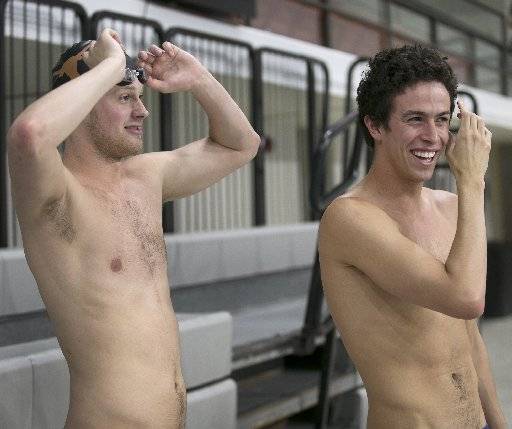 Texas swimmers definitely have left their burnt-orange imprint on the Olympic rings.

Consider what unfolded at the 2000 Games in Sydney, Australia. One third of the U.S. men’s team, including divers, were from UT.

Or how about 2004? That’s when seven swimmers with Longhorn ties made the U.S. team. The Americans won gold and broke the world record in the 400-meter medley relay, the final event of the meet. Three of the four swimmers on the relay also won NCAA titles for Texas.

In 2008 in Beijing, eight Texas swimmers and a diver made the U.S. team. They brought eight gold medals back to Austin.

At least one Longhorn has made the Olympic team since coach Eddie Reese took over as the Texas men’s squad in 1978. The Longhorns should extend the string. The Olympic Trials begin Sunday in Omaha, Neb., as swimmers attempt to qualify for the Rio Games, Aug. 5-21. Thirty swimmers with ties to the Longhorns will try for one of 26 spots on the U.S. men’s team.

As many as five Longhorns men, who are currently on the team or have already graduated, have realistic shots at making the trip to Rio. Four-time NCAA champion Joseph Schooling, a junior who will contend for Olympic gold in the butterfly events, already has qualified for the Singapore team.

Reese, who was head coach of the U.S. team in 1992, 2004 and 2008, will be on deck at the at CenturyLink Center to help guide his group. Reese has coached 29 Olympians who have won a collective 39 gold medals, 16 silvers and eight bronzes.

His swimmers began training last September, a month earlier than usual, for the Omaha meet. Reese will allow his athletes to be nervous while considering the enormity of the trials, but will tell them to splash some water on their face and dive into the pool.

“Our Olympic goal is to go to the meet and get out best times,” Reese said. “But that’s a hard goal. Most of the guys who do that, they’re going to do well.”

Here’s the five who have the best chance of securing an Olympic spot:

Townley Haas was a sensation at the NCAAs. He was only a freshman, but still won the 200- and 500-yard freestyles. He broke the American record in the 200.

Haas will swim the 200- and 400-meter freestyles in Omaha. He’s the seventh seed in the 200 and ranks sixth in the 400. Considering that the top six in the 200 free at the trials likely will make the team for the 800 free relay, Haas has a nice shot at Rio.

Conger has qualified for seven events, but won’t swim that many. He’s seeded second in the 200 fly and third in the 100 fly. He’ll also compete in the 200 free, where he has the eighth fastest qualifying time.

McBroom won the silver medal at the 2013 World Championships in the 800 free. But that’s not an Olympic event. He’ll have chances to make the team in the 400 and 1,500, events where he’s ranked among the top four in the country.

Will Licon will try to make the team in both breast strokes and the 200 individual medley. He’s the fifth seed in the IM and ranks sixth in the 200 breast.

Like the Texas men, the Longhorn women swimmers have a deep Olympic tradition. They’ve placed at least one current, former or future swimmer on every U.S. Olympic team since 1976.

Laura Sogar, who won a national title last year in the 200 breast, is seeded second in that event.

Incoming freshman Claire Adams is seeded fourth in the 100 back and seventh in the 200 back.

Texas opting out of ticketing contract with The Aspire Group