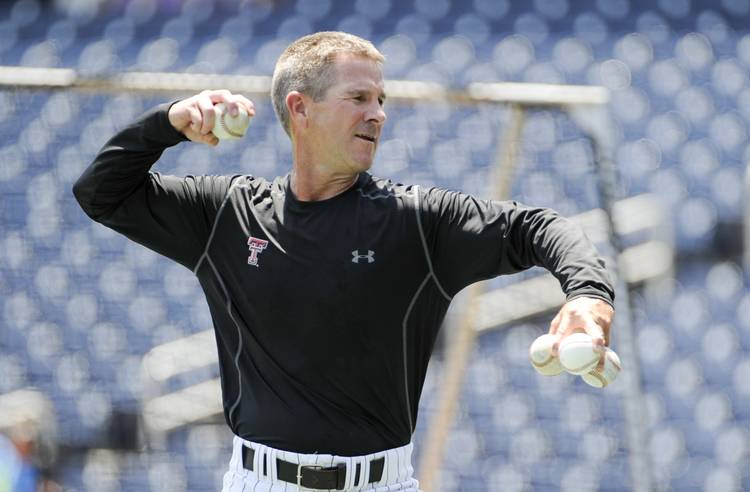 Texas’ baseball coaching search is looking like a 10 — yet it’s anything but perfect.

The number of prospective candidates to remove themselves from consideration has reached double-digits with Texas Tech’s Tim Tadlock pulling out and becoming No. 10 on Tuesday.

Ending hours of speculation that he could be headed to Austin to end the Longhorns’ exhaustive search, Tadlock, who according to a source had interest to in Texas, took to Twitter to say he’s staying at his alma mater, where he has guided the Red Raiders to the College World Series twice in the past three seasons. This year under Tadlock, Tech won the Big 12 regular season title and notched the program’s first CWS victory, eliminating top-seeded Florida.

That makes 10 rejections — or, if you want to be technical, preemptive refusals — in the 30 days since Texas moved Augie Garrido to an administrative role on Memorial Day.

It’s unclear what role, if any, a non-compete clause in Tadlock’s contract played in his staying in Lubbock. Per the clause, he was strictly forbidden from taking another job in the Big 12, which meant Texas ran the risk of incurring a lawsuit not unlike the one it settled with Oklahoma State on behalf of football assistant Joe Wickline.

With Tadlock out of the running, don’t be surprised if Texas circles back to Tulane’s David Pierce and maybe Houston’s Todd Whitting. UT interviewed both of them on June 18, but apparently didn’t find what it was looking for and decided to prolong the search to include Tadlock, Schlossnagle and Holliday.

On Monday, Schlossnagle signed an extension to stay at TCU and Holliday removed himself from consideration at Texas.

If Texas wants Pierce, it might have to wait a while to hold an introductory press conference. On Tuesday, Pierce headed out to California for a week of training with the USA collegiate national team. At the conclusion of the camp on July 2, the team will break for a few days before taking off for almost all of July to play games in China, Japan and Cuba.

Pierce, a Houston native, has been a head coach for five seasons, his team advancing to the NCAA tournament each year. Before coming to Tulane in 2015, he spent three seasons at Sam Houston State. Before then, he was Wayne Graham’s long-time assistant at Rice.

It should be noted if Pierce comes to UT, he’ll likely be without his top assistant, Sean Allen, who accepted a job on Greg Goff’s staff at Alabama on Tuesday.

Whomever takes the job will inherit a roster that’ll include two veterans who are returning to school after being selected in this month’s draft. According to a team spokeswoman, right-handed pitcher Morgan Cooper (34th round, Nationals) and shortstop Bret Boswell (40th, Pirates) have decided to come back and be redshirt juniors.