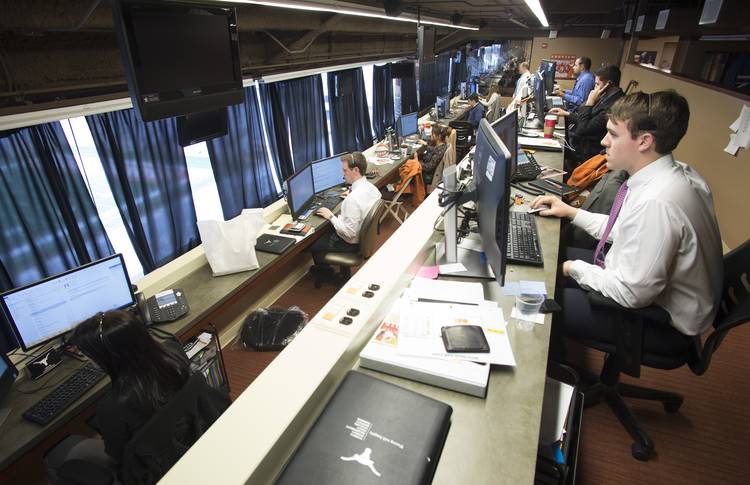 Employees hired by The Aspire Group set up their operations in the press box inside Royal-Memorial Stadium.

UPDATED 3:40 p.m.: The following story has been updated from its original version to include more information about The Aspire Group’s contract and other details.

With almost no advance warning, Mike Perrin has embarked on a mission to reverse one of Steve Patterson’s biggest achievements during his 22 months as the Texas athletic director.

Last week, Perrin notified The Aspire Group that he had a “change in philosophy” and would no longer use the Atlanta-based company for UT’s season-ticket sales, account maintenance and customer service.

Currently, Texas is only one year into what was expected to be a five-year contract. Under the terms of the deal, Texas must pay Aspire a monthly management fee of $26,666, or approximately $320,000 annually. Aspire also receives performance bonuses after certain sales goals are met. There is no buyout clause in the deal.

A team of 32 Aspire employees who worked in the Royal-Memorial Stadium press box learned of the decision last Friday, two sources told the American-Statesman. However, they were still at work on Tuesday and will keep going for now. Mike Meitin, a Texas employee who handled ticket marketing, has been told his job status is tied to Aspire, sources said.

Perrin, who was in West Texas on Tuesday, declined an interview request.

“Everything we’ve heard from the senior administration other than Mike has been superb comments,” said Bernie Mullin, founder of The Aspire Group. “There has been absolutely no communication whatsoever during the period of time we’ve been in Austin that there is a dissatisfaction in our sales and performance. We intend to honor our word in an iron-clad agreement.”

While Mullin never threatened specific legal action during an interview with the American-Statesman, his intentions were clear. “He’s on record knowing full well that we have no intention of walking away from the contract,” Mullin said.

It’s unclear why Perrin, who replaced Patterson last September, is making this move at all. “There appears to be no plan as to what happens now,” one source told the Statesman on Monday.

There had been few complaints about the sales and service team, mostly mid- to late-20-year-olds who made outbound sales calls and received commissions on each sale. The vast majority of complaints revolved around the actual ticket prices and a stiff resale policy — two decisions made by Patterson.

According to Mullin, Aspire was contractually required to reach 90 percent of its annual sales goals each of the first two years of the contract. Aspire’s sales team crossed that threshold two months ago, Mullin said, and its director had already been paid a sales bonus.

If Aspire reaches 90 percent of its sales goals for the first two years, an automatic three-year extension is triggered, Mullin said.

Aspire and UT officials previously agreed upon what the annual sales goals would be, Mullin said.

In bringing The Aspire Group to campus, Patterson essentially modernized UT’s ticket operations, bringing multiple box office operations under one roof. Patterson also brought more transparency to the ticket-buying process, like giving fans access to a software program that showed what seats were available to purchase.

Aspire’s biggest selling point was in offering a concierge-like experience; season-ticket holders could call a specific person with problems or issues as opposed to an 800 number.

Before Patterson arrived, Texas’ ticket operations were spread across multiple areas of the athletic department. That led to lax oversight and rampant abuses. A 16-month internal audit revealed that Longhorn Foundation employees accepted gifts and exploited loopholes to give preferential treatment to favored donors.

The abuse was so widespread, Texas officials refused to estimate how much money was lost over the years.

In a five-page athletic department response to the internal audit, The Aspire Group was touted as a vendor “to work on site at Texas Athletics to provide support and services for our entire donor and fan base.”

By centralizing ticket sales, service, retention and other ticket operations into a single reporting chain, the document said, it “eliminated communication silos and fostered sharing of information.”

Texas opting out of ticketing contract with The Aspire Group