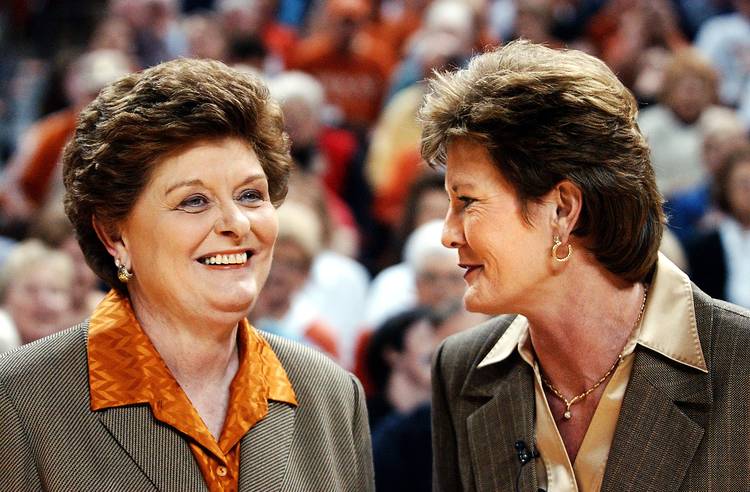 The schools’ women’s basketball teams have played each other 37 times. Both were led by Hall of Fame coaches who remain among the winningest women’s coaches of all time.

On Tuesday, Texas officials recalled the impact that former Lady Vols coach Pat Summitt — who died early Tuesday morning at the age of 64 — had on the game.

“My 30-plus year friendship with Pat Summitt is one I will always cherish, especially in a business that doesn’t always breed genuine friendship. When I think of women’s basketball, I instantly think of Pat Summitt because she’s truly synonymous with women’s basketball. It was evident, even in her early coaching years, that she’d leave her footprints on our game.

“Her passion, her fire, her love and knowledge of the game, put her in an elite class of coaches. In the coaching profession, one is judged by her victories and Pat’s teams certainly won a ton of games. But when I think about her greatest impact, I think about the young women she coached and mentored, and how fortunate they were to have Pat as a leader and coach, and how blessed I have been to have her as a friend.”

Aston: She changed how we view women’s sports leaders

“Not only is the women’s basketball coaching community deeply affected by the passing of Pat Summitt, but the world of sports is surely mourning with us today. We have lost a legendary mentor, coach, mother, role model and friend who truly changed the way we all view women in sports leadership.

“I personally grew up admiring her passion for basketball, but most importantly, her vision of helping young girls grow into confident women. We will all be forever grateful that she touched our lives in the manner that she did, and should celebrate her life and influence as we remember her. Our thoughts and prayers go out to the Summitt family, as well as the entire Lady Vol community.”

“The modern era of collegiate women’s sports and Pat Summitt’s coaching career are intertwined. There were NCAA championships and Olympic gold, but also hundreds of young women whose lives were impacted by higher education and college degrees.

“Texas Athletics always has felt a special competitive bond with Tennessee, as administrations at both institutions made early commitments to supporting Title IX and opportunities for women in sport and education. Pat’s first NCAA title was achieved at our Frank Erwin Special Events Center in 1987. We join with the Lady Vols today in expressing our love and appreciation for Pat and her life’s work.”

TEXAS VS. TENNESSEE: A LOOK BACK

“There was a time when we were struggling and we weren’t competitive,” Conradt said. “There would be a temptation to say, ‘I don’t think we need to play this game because we can’t compete,’ or for their side to say, ‘This isn’t helping us get better.’ That has never even been a consideration for either side. We did this for the good of the game and it has been good for both programs.”

Texas’ 2016-17 schedule hasn’t been released yet. But a UT spokesman said Tuesday that the Longhorns and Lady Vols will meet for the 35th straight year and that this season’s game will be in Austin.

Aspire Group: ‘No intention of walking away’ from Texas

After 30 days, Texas is still without a baseball coach — what now?