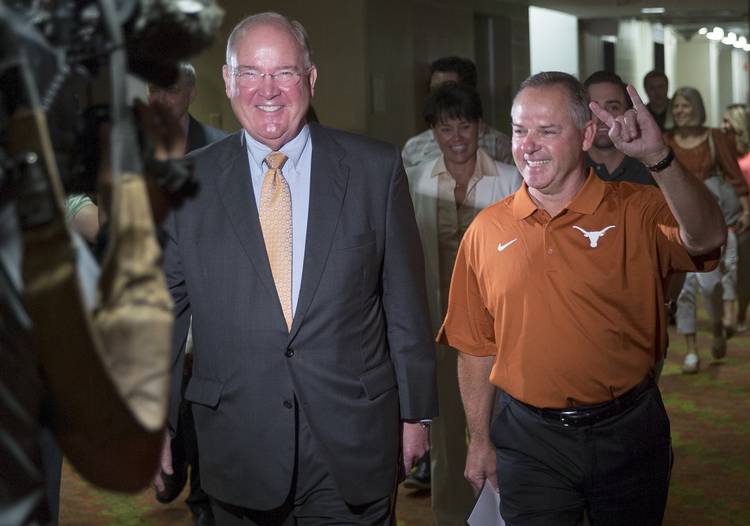 University of Texas Athletic director Mike Perrin and the new baseball coach David Pierce flashes the Hook 'em sign as they make their way with family and friends to a press conference at the Centennial Room of Bellmont Hall on Thursday, June 30, 2016. RICARDO B. BRAZZIELL/AMERICAN-STATESMAN

Texas athletic director Mike Perrin is exploring whether the athletic department is best served by firing The Aspire Group and turning season-ticket sales operations back over to the Longhorn Foundation, three sources have told the American-Statesman.

On Thursday, Perrin said he “doesn’t believe in breaking contracts.” However, he confirmed that he has started conversations with Aspire founder Bernie Mullin to get out of what was expected to be a five-year deal.

The Aspire Group has 32 employees working at UT making outbound sales calls and offering a concierge-like experience for ticket holders. According to the contract, UT pays Aspire more than $26,000 per month as a maintenance fee, and Aspire’s commission-based employees can receive bonuses by hitting sales goals.

“I don’t have a problem with Aspire, personally,” Perrin said. “To me, it’s a philosophical situation. I told Bernie that last week. I think Bernie’s a perfectly fine representative of the industry he’s in. I just don’t think we need that kind of personnel, that kind of overhead, that kind of factor dealing with selling tickets to University of Texas sporting events.”

Perrin conveyed similar thoughts to The Aspire Group in a letter submitted to the Atlanta-based company last Friday, sources said.

Mullin has told the Statesman there is no buyout provision in Aspire’s contract with UT. The only way UT could activate an escape clause would be if Aspire failed to reach certain sales goals. All sales goals were exceeded for the 2015-16 athletic year, Mullin said.

Turning ticket sales back over to the Longhorn Foundation, meanwhile, would raise eyebrows on campus.

A 16-month university audit released last year revealed widespread abuses inside the Longhorn Foundation regarding ticketing. Employees were found to receive gifts and other kickbacks for giving preferential treatment to favored donors.

Foundation employees had access to ticket printing machines and were able to print off untold numbers of tickets, thereby removing them from the system, and then either giving them away or selling on their own, the audit stated. The abuse was so widespread, the audit found, the university could not accurately gauge how much revenue had been lost over the years.

Asked specifically on Thursday if he would turn ticketing over to the Longhorn Foundation, Perrin said, “I have not decided exactly what’s going to happen. Part of that depends on Mr. Mullin. There is a contract. I don’t believe in breaking contracts. That’s not on my radar. I’m assuming he feels the same way. It’s a process that will be evolving.”

About those Aggies: Texas coach Charlie Strong certainly turned heads in June when he indicated UT was in talks to restart its rivalry with Texas A&M. Perrin said UT mega-booster Red McCombs recently asked the same question at an event at the business school.

“At the end, I said, ‘Mr. McCombs, when do you want that game played?’ He said, ‘Today at 1 o’clock,’ ” Perrin said. “I think there’s a lot of people who feel that way. I think the game will be restored at some point, but who knows when.”

“Randa has had a special project for the last six months or so that I anticipate will be concluded in the next several months,” Perrin said. “I really can’t comment beyond that on her situation.”