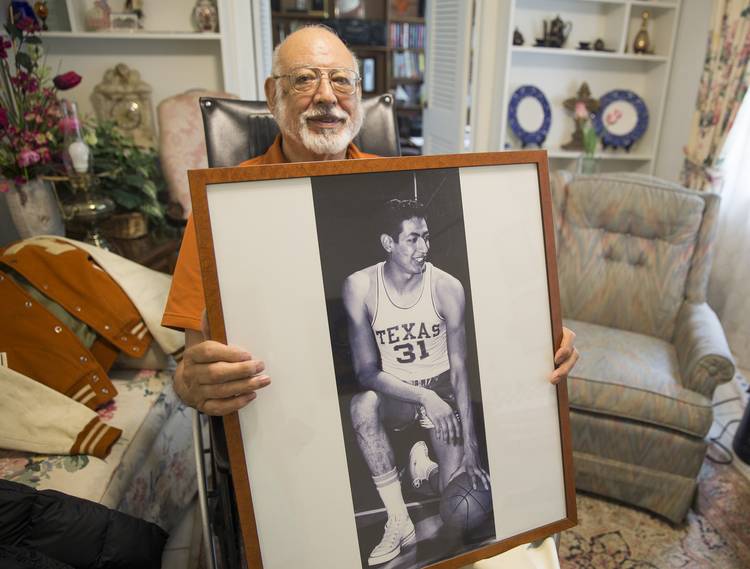 Albert Almanza’s basketball legacy has been stashed in a closet for more than 50 years.

But Almanza’s “pride and joy” is a white warmup jacket, trimmed with green and red, that he wore at the 1960 Summer Olympics in Rome and again in the 1964 Olympics in Tokyo. He was the captain of both Olympic basketball teams — for his beloved Mexico.

When this year’s Olympics kick off in August in Rio, Kevin Durant will become the second Longhorn to play in the Olympics twice. Almanza, a three-year starter for Texas from 1958-61, was the first.

Almanza, 80, was born in Chihuahua, Mexico. He honed his basketball skills at a local YMCA there, sneaking out of the house at night to play pickup games with friends. He and his family moved to El Paso when he was a teenager, and there he hooked up with a team sponsored by Pabst Blue Ribbon beer. It was during a city league tournament when Almanza was discovered by Leon Black, a former Longhorn from the 1950s who would later became Texas’ coach.

Black was serving in the Army at nearby Fort Bliss in the mid-1950s when he noticed Almanza — who never played high school basketball — towering over area competition. Black notified Texas assistant coach Jimmy Viramontes, encouraging him to fly to El Paso to take a look at Almanza.

“First of all, Albert had the size to be a good player,” said Black, who coached Texas from 1967-76. “He had good basketball instincts. There was a lot he didn’t know about basketball, but you could see his potential.”

Viramontes took the bait and went to scout the 6-8, 170-pound Almanza. He paid a visit to Almanza’s father, Manuel, explaining the benefits of playing and getting an education at Texas.

“The next thing you know,” Almanza said, “my father comes out of the house and says, ‘Son, you’re going to Texas.’”

After playing one season on UT’s freshman team, Almanza carved out a nice career. With two future Olympians on the roster — Almanza (Mexico) and Jay Arnette, who would represent the U.S. in the Rome Games — Texas won the 1960 Southwest Conference title and made it to the Sweet 16 in that year’s NCAA Tournament, falling to Kansas.

In his three varsity seasons, Almanza averaged 11, 10.8 and 14 points per game. His career average of eight rebounds a game still ranks ninth on UT’s all-time list. Not bad for someone who arrived at Texas unable to speak English.

“My teammates would poke fun at first, knowing about my problem,” Almanza recalled, sitting in his spacious West Austin home. “After awhile, though, we all became good friends.”

In the spring of 1960, the Mexican Basketball Federation invited Almanza to take part in the national team tryouts back in Chihuahua, the town where he was born. He made the Olympic squad and was named Mexico’s captain for the 1960 and 1964 teams. He was Mexico’s leading scorer in both Olympics.

His friends and teammates playfully referred to him as “El Chorrito,” which means “trickle” or “squirt” in Spanish. When an old friend noticed water spouting from a broken pipe, he quickly said it resembled Almanza. The nickname stuck.

“The water squirted very high, and someone said it was tall and skinny — just like me,” he said.

“Albert weighed this much,” said his wife Helen, pointing her index finger straight up. “He was a stick.”

Mexico won roughly half its games in the 1960 and ’64 Olympics. Almanza recalls guarding a 7-foot-2, 311-pound player named Janis Krumins of the Soviet Union in 1960.

“There was a picture of me behind (Krumins), and all you could see are my arms sticking out,” Almanza said, laughing at the memory.

Almanza planned to skip the 1964 Olympics. He had no time to commit to basketball because he had become a school teacher at Jefferson High School in El Paso. Plus he was raising his first child, Boone, now an Austin attorney.

Mexico, though, would not take El Chorrito’s no for answer.

Almanza recalled that his principal “demanded I go” to the Olympics. He would continue to get paid by the school during his stay in Tokyo.

Almanza said he and his teammates cherished their moments in London and Tokyo.

“The Mexican team was particularly popular in Tokyo,” Almanza said. “At the Olympic Village, athletes usually exchange patches and pins native to their countries. In ‘64, the delegation from Mexico gave our athletes little bottles of tequila to spread around. They were marketing Mexico for being the site of the next Olympics (in 1968) in Mexico City. When everyone found out about us, we were swarmed by athletes asking for bottles of tequila.”

At 6-8, Almanza stood head and shoulders above everyone when he walked through Tokyo.

“I think they were kind of scared of him,” said Helen, a retired speech pathologist.

Bystanders referred to Almanza as “Papasan,” which roughly translates to “man of authority” in Japanese.

More than 50 years have passed since Almanza has dribbled a basketball, but he remains a celebrity in Mexico, his son Boone said. Albert and Helen have had strokes and are relegated to wheelchairs. Yet they remain vibrant with visitors and are active in various church and civic groups.

“When we go through immigration across the border, my dad is treated like a rock star,” Boone said. “And here in Austin, not a day goes by without someone mentioning everything my father has done for them. They’ll say, ‘I watched your dad play’ or ‘he was a beautiful player.’ He’s touched a lot of lives through his volunteer work, mentoring kids in East Austin.”

Almanza, who worked for the New York Life insurance company for 35 years before he retired in 2011, served on the board of directors of the River City Youth Foundation for 25 years. The organization devotes resources for community development, health and wellness, mentoring, college and careers, to name a few services.

Each Thursday, the Chile Relleno Society of Austin — a group Almanza founded in 2010 — meets for lunch. The members, mostly from the Tarrytown United Methodist Church, donate money to the youth foundation every week.

“When you consider that Big Al has worked with us decade after decade, you know he’s got a really big heart,” said Mona Gonzalez, who founded the organization in the Dove Springs area of southeast Austin in 1983.

Through the years, Almanza has not been forgotten by Texas. He has owned season tickets for Longhorns games since the 1970s. Former men’s coach Rick Barnes, in his final season, presented Almanza with a gift — a statue topped with a burnt orange Longhorn figurine, thanking him for his years of support to the program.

In 2004, Almanza was voted into the Texas Men’s Athletics Hall of Honor.

Boone Almanza, who played basketball at Houston Baptist University, said that his father is so modest, he was unaware that he’d played in the Olympics for Mexico until he was a teenager. Most of Almanza’s friends don’t know he was selected by the Los Angeles Lakers in the 1961 draft. He declined a $10,000 salary — “that was good money in those days” — to concentrate on raising a family and building his own career.

“My mother and I have to brag for him because he is disdainful of bragging,” Boone said. “My dad has always been the ultimate servant leader — he leads quietly and allows others to follow if they so wish.”

31 days for Texas: An insider’s look into the baseball coaching search