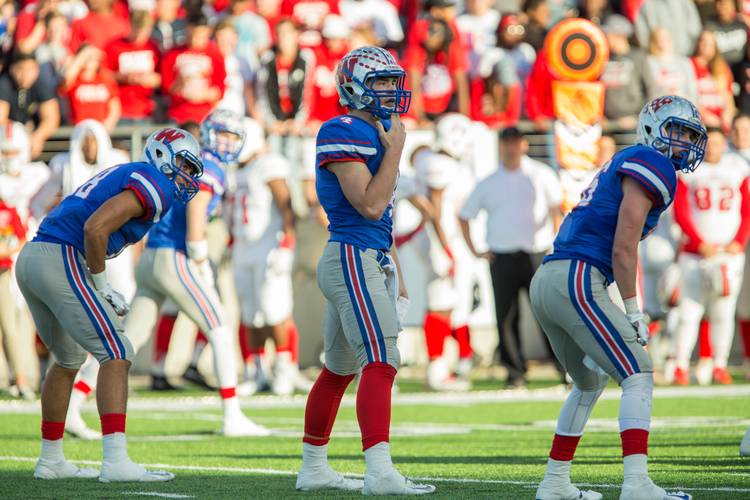 Sam Ehlinger is one of 22 Texans invited to The Opening this week in Oregon.5. (Paul Brick/Austin Community Newspapers)

This week, the nation’s top high school football players will gather at Nike’s world headquarters in Beaverton, Ore. and participate in drills on Bo Jackson and Ronaldo fields.

Visitors are instructed to park at a lot near the Mia Hamm Building. Media members will crank out reports from the Tiger Woods Center.

There is no shortage of marquee names at Swoosh U., and that’s before you get to the 166 high school players — most of them rising seniors — who’ve accepted a coveted invitation to The Opening. Considered the nation’s premier summer event, The Opening uses a rigid selection process that excludes all but the very best college prospects, which, a year ago, included Texas signees Shane Buechele, Jeffrey McCulloch, Eric Cuffee, Devin Duvernay, Brandon Jones and Erick Fowler.

Beginning Wednesday, Sam Ehlinger begins his bid to win MVP honors of the Elite 11, a recruiting competition for quarterbacks held in conjunction with The Opening. In May, Ehlinger, a Texas commitment from Westlake, advanced from an Elite 11 regional in New Jersey. Then last month in Los Angeles, he snagged the final berth to The Opening at the Elite 11 Finals, where he also earned an award for being the most coachable quarterback there.

Over the next five days, Ehlinger is set to go head-to-head with 11 other premier quarterbacks, including Oklahoma commit Chris Robison of Mesquite Horn.

Ehlinger is the third UT quarterback commitment in four years to make it this far, joining Opening alumni Buechele (2015) and Jerrod Heard (2013).

On Saturday, running backs, receivers and defenders will join quarterbacks for a 7-on-7 passing tournament. After two days, a champion will be crowned from the six teams. Meanwhile, linemen will participate in a big man competition.

Ehlinger will share controls of team Flyrush with Stanford QB commitment Davis Mills of Atlanta. Their supporting cast includes five-star receiver Joseph Lewis of Los Angeles; Stanford pledge Colby Parkinson, the nation’s top-ranked tight end; UT target Baron Browning, a five-star outside linebacker from Kennedale; Oklahoma State pledge Tylan Wallace, a speedy receiver from Fort Worth South Hills; and TCU pledge Josh Thompson, a cornerback from Nacogdoches. Scratched from Flyrush’s roster is UT pledge Kobe Boyce, who will not make the trip after pulling out with a finger injury. Boyce, a cornerback from Lake Dallas, is wavering on his commitment to the Longhorns and recently took a visit to Iowa.

Even without Boyce, The Opening features a whopping 22 players from Texas, which ranks second to Florida’s 28. California is third with 18. Among the Texans who received invitations are eight of the state’s top 10 players on the Statesman’s Fab 55 — No. 1 Marvin Wilson (DT, Bellaire Episcopal); No. 2 Browning; No. 3 Jack Anderson (OL, a Texas Tech pledge); No. 4 JK Dobbins (RB, La Grange); No. 5 Jeffrey Okudah (DB, South Grand Prairie); No. 7 Austin Deculus (OT, Houston Cypress Fairbanks); No. 8 Anthony Hines (LB, Plano East); and Ehlinger, who’s No. 10.

For those who appreciate size, be sure to check out 6 feet, 8-inch, 305 pound offensive tackle Walker Little of Bellaire Episcopal. Ranked No. 15 in the Fab 55, Little is strongly considering Texas.

In fact, Texas is in the running for most of the state’s top uncommitted players and, in April, emerged as the leader to land the nation’s second-ranked recruit, Dylan Moses of IMG Academy in Florida. Moses, an outside linebacker who is originally from Baton Rouge, recently announced the five official visits he’ll take this fall, which includes a stop to Austin to see Texas play Iowa State on Oct. 15.

Yet on Wednesday and Thursday, discussion will center on the quarterbacks and the continuation of the Elite 11. Here’s a breakdown of where Ehlinger stands in the field:

Dylan McCaffrey, Hypercool — The nation’s second-ranked pro style QB was just OK in L.A., but projects to be a star because of his bloodlines (his brother is 2015 Heisman finalist Christian McCaffrey of Stanford) and because at Michigan, he’ll take in coaching from quarterback ace Jim Harbaugh.

Hunter Johnson, Mach Speed — Spectators were robbed when he left L.A. to return home to Indiana for a track meet.

Jack Sears, Lunarbeast — The lone uncommitted QB of the group might be leaning toward UCLA.

Tate Martell, Alpha Pro — Since we last we saw Martell, the nation’s top-ranked dual threat QB committed to Ohio State. His height, just 5-10, is a concern.

Tua Tagovailoa, Vaporspeed — Far and away the top performer in L.A. Tagovailoa is a sight to behold — a left-handed Hawaiian who is committed to Alabama.

Sean Clifford, Mach Speed — Penn State pledge was named the most accurate QB at the Finals.

Chris Robison, Vaporspeed — If it’s not Ehlinger, Robison is the state’s top QB. Oklahoma is getting a good one.

Myles Brennan, Hypercool — For reasons that are beyond us, Brennan is only a three-star prospect. Yet in two seasons, the LSU commitment has thrown for 11,045 yards with 117 TDs.

Tommy Devito, Lunarbeast — Syracuse got a steal, but bigger schools will try to poach.

Sam Ehlinger, FlyRush — If this competition was based solely on speed and strength, he’d be your winner. Yet he’s also a crisp passer.