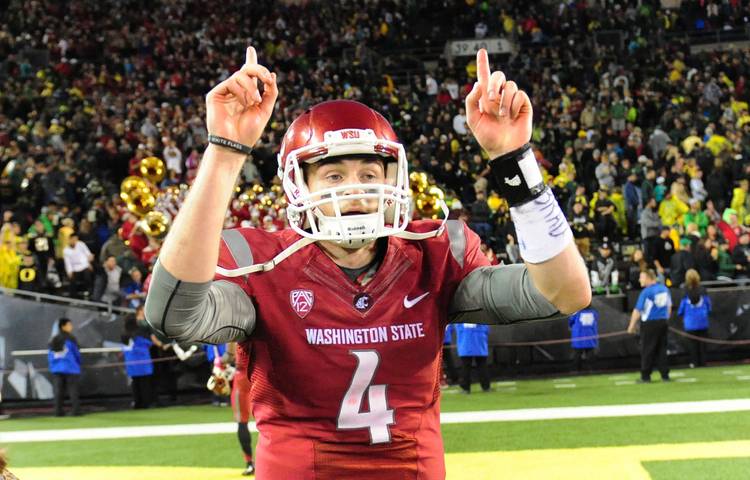 Quarterback Luke Falk #4 of the Washington State Cougars celebrates after the game against the Oregon Ducks at Autzen Stadium on October 10, 2015 in Eugene, Oregon. The Cougars won the game 45-38 in overtime.(Photo by Steve Dykes/Getty Images)

Sure, it’s just July. But it’s never too early to talk college football. Here’s your daily fix — our countdown of the preseason Top 25, as selected by the American-Statesman sports staff. Last season’s four College Football Playoff semifinalists were rated Nos. 3, 6, 13 and 24 on our 2015 list.

The Cougars will contend if … they can prove that last year’s nine wins is the new norm instead of an aberration — Washington State averaged 3.7 wins per season from 2004 to 2014. If an experienced and pass-happy offense led by junior quarterback Luke Falk continues to put points on the scoreboard, nine wins might be a low bar to hurdle.

Spring cleaning: The Cougars lost only one of their top five pass catchers from 2015 but do have two new assistant coaches — Dave Nichol (outside receivers) and JaMarcus Shephard (inside receivers). … The 2016 recruiting class was ranked 56th in the nation by 247Sports’ composite ratings; no single recruit was rated higher than three stars. … Dahl was Washington State’s only player to be drafted (Lions, fifth round), though others have signed as undrafted free agents.

No. 24: Coming Thursday. Want a hint? The head coach also played at this school — its first alumnus to become head football coach.

The Opening: Sam Ehlinger among 22 Texans heading to Oregon

The Opening: Despite shoulder pain, Sam Ehlinger excels in day one