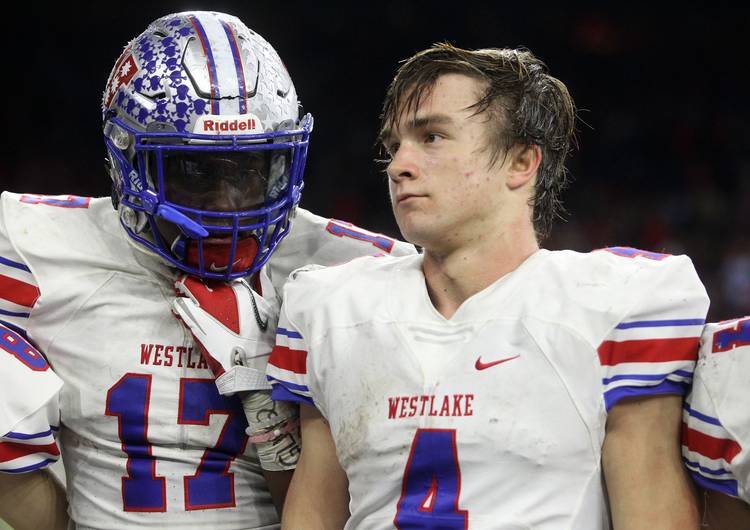 BEAVERTON, Ore. — Anyone with even a basic understanding of football can appreciate Sam Ehlinger’s power and speed and his ability to drive the ball down the field.

Yet on Wednesday — the first day of The Opening — Ehlinger unveiled something deeper: He can perform through pain.

Though he said he’s having difficulties with his right (throwing) shoulder, no one would’ve suspected anything was amiss with the Texas commitment. Looking every bit as sharp as he did last month at the Elite 11 Finals in Los Angeles, Ehlinger, of Westlake, hit on the majority of his attempts during routine passing drills at Nike World Headquarters.

“It started bothering me (Tuesday) and it really hasn’t gone away,” Ehlinger said.

Ehlinger said he spoke with trainers who advised him on stretches he can do to calm the discomfort.

[brightcove_video video_id=”5023431425001″ caption=”Texas commit Sam Ehlinger, of Westlake, participates in passing drills during day one of The Opening in Oregon on Wednesday.”]

His health is worth monitoring as the QB competition intensifies throughout the rest of the week and into Saturday’s 7-on-7 tournament. Ehlinger is sharing QB duties on Team Flyrush with Stanford commit Davis Mills, of Atlanta, who is among the favorites to win MVP of the Elite 11. Between them, they’ll throw to a talented group of playmakers that includes uncommitted five-star receiver Joseph Lewis of Los Angeles. Lewis, the nation’s second-ranked receiver per 247Sports’ composite ratings, does not hold an offer from Texas, but that isn’t stopping Ehlinger from making a pitch.

“I’m gonna start talking to Texas coaches about him and trying to get to know him pretty well,” Ehlinger said. “I think that’s a guy who could potentially go to Texas.”

Lewis, who holds 33 offers, recently set up a visit to Oklahoma for November.

Wednesday had a get-to-know-you feel, giving quarterbacks like Ehlinger and Mesquite Horn’s Chris Robison (an Oklahoma commit) a chance to get in sync with pass-catchers. Across the state, Texas is loaded at wide receiver, and four of them received invitations to The Opening — Lewisville’s Tyrell Shavers (Alabama), Waxahachie’s Jalen Reagor (Oklahoma), Fort Worth South Hills’ Tylan Wallace (Oklahoma State) and Lancaster’s Omar Manning (uncommitted).

RELATED COVERAGE: What 2017 recruits will QB Sam Ehlinger press to join him at Texas?

The Opening: Lewisville’s Tyrell Shavers is a big man with a small number