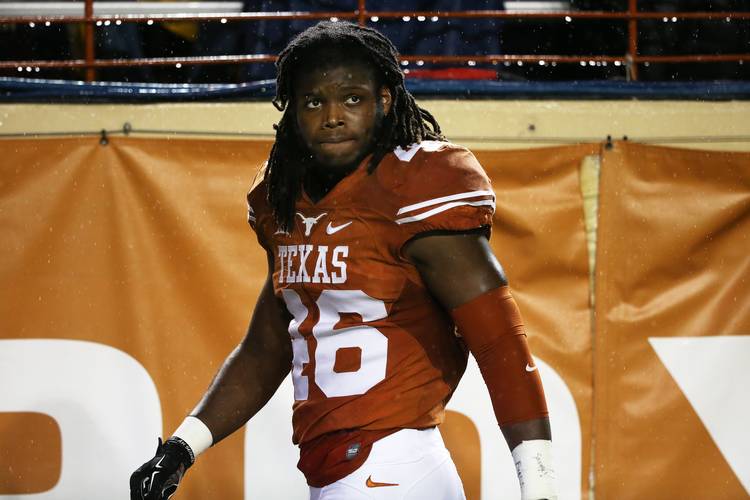 BEAVERTON, Ore. — Texas linebacker Malik Jefferson has made his way to The Opening where he’ll be an assistant coach in the 7-on-7 tournament.

The present and future leaders of the Longhorns are joining forces with Team Flyrush in the two-day tournament. Their squad opens Saturday against Team Lunarbeast, whose defense is led by Texas linebacker targets Dylan Moses and Anthony Hines.

Jefferson, the Big 12 defensive freshman of the year last season, is among 17 alums of The Opening who are back to help coach. He was also here in 2014, several months before Jefferson, the state’s top recruit that year, lifted Charlie Strong’s world by picking Texas over Texas A&M and ending the Aggies’ recruiting hold on the state.

Out in Oregon with Coach Jefferson! It was a bad idea to put us on the same team. Hook 'em! 🤘 pic.twitter.com/hTW4tBYPxm

As coach, Jefferson will surely get in the ear of Team Flyrush linebacker Baron Browning, who Texas is recruiting hard out of Kennedale. Browning, a five-star prospect and the nation’s second-ranked outside linebacker, said he will visit the Longhorns later this month at the team’s Under the Lights camp.

In addition to Jefferson, other college players coaching in the tournament include Stanford running back Christian McCaffrey, LSU running back Leonard Fournette and Alabama tight end O.J. Howard.

Bama-Sooners: Alabama and Oklahoma are working on two of the nation’s top recruiting classes in 2017, so it stands to reason Team Vaporspeed will be a formidable squad in the 7-on-7 tournament. Of the team’s 21 players, six are committed to Alabama and eight to Oklahoma.

Vaporspeed has a QB from each school — Alabama commit Tua Tagovailoa and Oklahoma commit Chris Robison of Mesquite Horn.

Like usual, Bama is expected to sign a stellar class, which currently ranks second nationally. Oklahoma, which has upped its recruiting efforts in Texas with six commitments from the Lonestar State, ranks fifth.

Wilson, the state’s top player, said this was the first time he’s tested to see how many times he could put up 225 pounds, which is the standard weight used at the NFL Combine.

On Saturday, linemen will split off from the pack for a big man challenge.

Jordan showed good explosion in pass rush drills. Eze (6-6, 277) needs to get strong but is amazingly limber for someone of his size. Hayden showed some nice shake to avoid linebackers in the Cat vs. Mouse drill.

The American-Statesman’s Top 25: No. 22 Oklahoma State