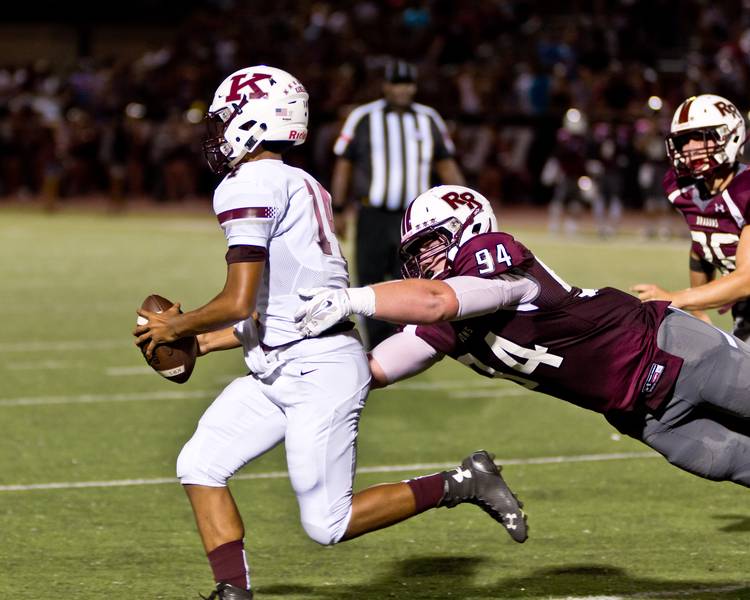 After losing a battle in a lineman drill, Round Rock’s James Lynch stepped aside and got some pointers from one of the best to ever play in the trenches.

Ndamukong Suh, a multi-time pro bowler who once harassed Colt McCoy in the 2009 Big 12 title game, instructed Lynch to use his hands to disengage from his blocker.

As a result, Lynch earned a round of atta boys after bowling over LSU commit Saadhiq Charles during one-on-one drills on the final day of The Opening. Lynch, who committed to TCU in May, was among 20 defensive linemen who earned an invitation to Nike’s world headquarters for the prestigious camp. Lynch will now settle in back home and prepare for his senior season with the Dragons, where in addition to playing on the defensive line, he also punts and plays tight end as an extra blocker.

Lynch said the best part of the past three days was the instruction he received from Suh, of the Miami Dolphins, and coaches Kenard Lang and Chuck Wiley, who both had long careers in the NFL.

Wiley gave Lynch positive marks, noting that after Lynch played tentatively on day one he continually progressed and took well to teaching and film study.

A day earlier, Lynch sat out one-on-one drills with a hip injury that, through ice application, he says is now “100 percent.”

Among the best offensive linemen Lynch said he faced was Texas A&M commit Creed Humphrey of Shawnee, Okla., and Texas Tech commit Jack Anderson of Frisco, who Lynch battled at The Opening regional in Dallas.

“It’s good going against people like that,” Lynch said. “It gets me ready for college.”

Other standout linemen, based on observations by the American-Statesman, were Ohio State commits Wyatt Davis and Josh Myers, who are the nation’s top-ranked guard and tackle, respectively, and along with Bellaire Episcopal’s Walker Little (offensive tackle) and Marvin Wilson (defensive tackle). Also catching our attention were Alabama commit Alex Leatherwood (OT) and LSU commit Tyler Shelvin (DT).

Slated to play tackle at TCU, Lynch (6-5, 280 pounds) is anything but a space-filler. Athletic for his size, he ran the 40-yard dash this week in 4.97 seconds and the cone shuttle in 4.3 seconds. That speed could come in handy if Round Rock head coach Jeff Cheatham whips up a fake punt this fall.

So what’s up with Lynch doubling as his team’s punter? Growing up he said he was skilled in kick ball, so he transitioned naturally from the playground to the gridiron. Last year, he averaged about 40 yards per punt with a long of 55 yards.

“The refs always laugh at me asking what I’m doing back there,” Lynch said.

Behind Lynch and cornerback Brian Bullock, who is off to play at Northwestern, Round Rock shared last year’s district title before falling to eventual 6A state finalist Westlake in the opening round of the playoffs. The Dragons should be pretty good again with a sturdy defense and an offense that includes Division I prospect Tyler Castaneda, an offensive linemen who was committed to Texas Tech before backing out of his pledge in March.

Lynch said he chose TCU because it’s close to home and because former Round Rock defensive lineman Breylin Mitchell had an enjoyable experience with the Horned Frogs as a freshman last year. Too, Lynch calls TCU head coach Gary Patterson a “defensive guru.”

Though Lynch says he’s “firmly” committed, he acknowledged “we still have a long way to see what happens.” A three-star prospect, he has offers from 14 schools but not from Texas or from Texas A&M.

The Opening: Sam Ehlinger’s team finishes runner up in 7-on-7 tournament