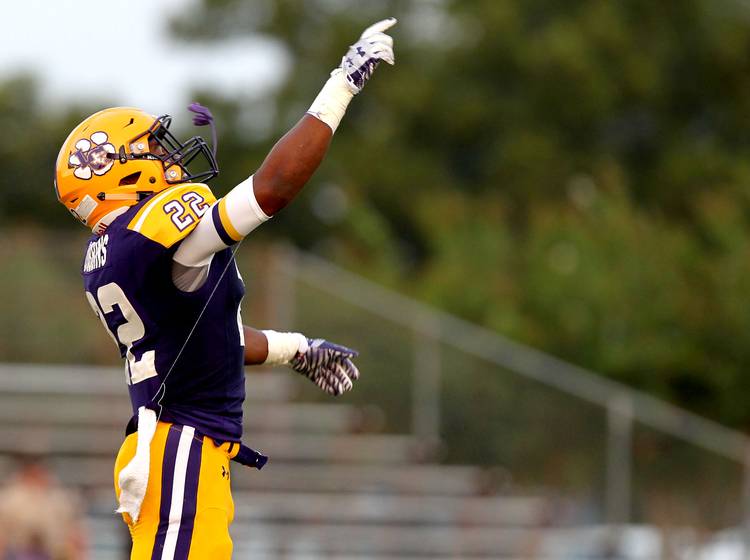 BEAVERTON, Ore. — Here’s a look at the 22 Texans who finished up at The Opening on Sunday.

WR Tylan Wallace, Fort Worth South Hills, Oklahoma State — Sam Ehlinger’s 7-on-7 teammate had a big drop during a loss on Saturday.

Will Texas get him? No.

DB Grant Delpit, IMG Academy, LSU — Previously of Houston Lamar, Delpit is long and athletic and closes passing lanes in a hurry. Had he stayed in Texas, he might have ended up being a top 10-12 player in the state.

Will Texas get him? Doesn’t appear so. Delpit committed to LSU on Saturday.

Will Texas get him? Let’s first worry about the 2017 class.

OL Jack Anderson, Frisco, Texas Tech — Honestly, didn’t see enough of Anderson to form any sort of conclusion. From what I’m told, he was solid but unspectacular.

Will Texas get him? Probably not. He’s a Texas Tech legacy and wants to play in Lubbock.

DB Jeffrey Okudah, South Grand Prairie, uncommitted — Without prior knowledge, I wouldn’t have known Okudah was even at The Opening. Quiet weekend for the five-star safety. Watched a couple of his team’s games and rarely saw Okudah on the field. However, he flashed earlier in the week, finishing second among 166 players in the Nike Football Testing, which takes into account one’s times in the 40 and cone shuttle, a vertical leap, and a ball toss.

DB Josh Thompson, Nacogdoches, TCU — He was among several defensive backs who made plays for runner-up Fly Rush.

Will Texas get him? Texas has not offered Thompson.

Will Texas get him? Don’t see him turning his back on Bama.

RB JK Dobbins, La Grange, Ohio State — Edged Okudah for the Nike Football Testing title as the most athletic player in camp. Running backs don’t normally excel in 7-on-7 tournaments, but Dobbins had some nice moments out of the back field, including a reception on a deep ball in traffic.

Will Texas get him? Wouldn’t that be nice. Dobbins said he’s firmly committed to OSU but acknowledged that Charlie Strong does his best work at the end of recruiting cycles.

DB Robert Barnes, Southlake Carroll, Oklahoma — Only Texan named to the all-tournament team. Coupled with Okudah’s no-show, Barnes might have solidified himself as the state’s top safety.

Will Texas get him? Haven’t heard anything suggesting Barnes is souring on OU.

OL Xavier Newman, DeSoto, Texas — At 6-2, 272 pounds, Newman is on the smaller side for interior linemen. However, he seemed to hold up well the couple of times I saw him in one-on-one drills.

Will Texas get him? Texas holds his pledge for the time being, but might lose it to OU. Newman said his commitment level to the Longhorns is “a 7 or 8” but that his interest in the Sooners is “a 9.”

LB Baron Browning, Kennedale, uncommitted — Impressive physically, but production was limited because he could not rush the passer and because there was no running game to stop.

Will Texas get him? Like other top targets, Browning, a five-star prospect, is waiting to see how the Horns do in 2016.

OL Austin Deculus, Cy-Fair, LSU — Had some trouble staying in front of quicker ends, but that’s not a huge surprise considering he’s 6-6 and 323 pounds. May be suited better for guard than tackle.

Will Texas get him? Nope. He wants to leave the state.

RB Toneil Carter, Langham Creek, Georgia — Made some noise Sunday when he announced his commitment to Georgia.

Will Texas get him? Texas is pursuing only one running back — Dobbins.

Will Texas get him? The Horns better be ready for an all-out brawl with Alabama, Florida State and others.

DE K’Lavon Chaisson, Galena Park North Shore, uncommitted — Needs to get heavier (just 217 pounds), but showed some good explosion off of the edge. Ranked second among defensive linemen in the 40-yard dash (4.67 seconds).

Will Texas get him? Just a hunch, but no. Oklahoma might be the team to beat here. Plus, Texas probably prefers Browning to Chaisson at FOX end.

QB Chris Robison, Mesquite Horn, Oklahoma — Overshadowed by his 7-on-7 teammate, Elite MVP Tua Tagovailoa. Yet, Robison, who has an absolute rocket, was anything but a Plan B for champion Vapor Speed. The Sooners are getting a stud.

Will Texas get him? No.

QB Sam Ehlinger, Westlake, Texas — Had a high completion percentage, but didn’t drive the ball down the field enough and therefore had too many three-and-outs. Still, Texas should be thrilled about getting one of the country’s top 10 quarterbacks.

Will Texas get him? Duh.

OT Walker Little, Bellaire Episcopal, uncommitted — Twice, he shut down defensive end Drew Jordan, who was one of the camp’s top five defensive linemen. Little had a big week.

Will Texas get him? Yes, but only if the Longhorns have a successful season.

Will Texas get him? Yes. Book it.

Will Texas get him? No. Reagor’s dad said his son is sticking with Oklahoma.

DL James Lynch, Round Rock, TCU — His coaches said Lynch improved each day and did his best work on Sunday.

Will Texas get him? Not without offering him.

Will Texas get him? Smart money says yes.

RELATED COVERAGE: The Opening: Round Rock’s James Lynch takes coaching from the best

The American-Statesman’s Top 25: No. 20 North Carolina