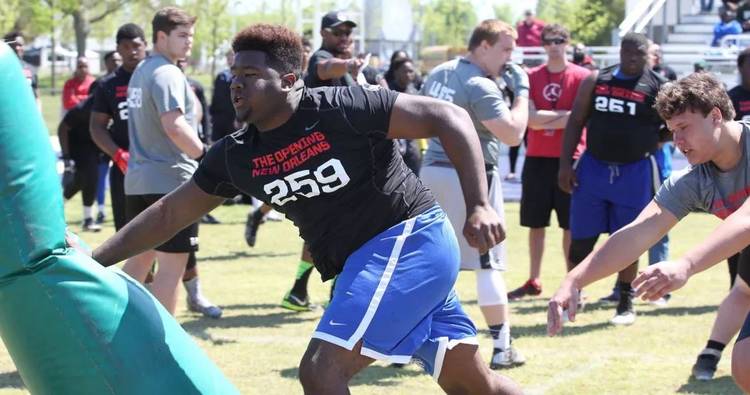 Big Marv remains at the top, but overall there have been significant changes to the summer update of the initial American-Statesman’s Fabulous 55 published in April.

Displaying impressive speed and length, Hines advanced six spots to No. 2 and showed why he’s the nation’s top-ranked inside linebacker, per 247Sports’ composite rankings. Little made an even bigger push, improving 12 spots to No. 3 after he made a mockery of the country’s premier pass-rushers.

Heading into this season, Texas is in contention, if not the leader, for Wilson, Hines and Little, and will not go down quietly for La Grange running back J.K. Dobbins, an Ohio State commitment who comes in at No. 4 for the second straight edition. The Horns are also in the mix for fifth-ranked Kennedale linebacker Baron Browning, who was the victim of Hines’ and Little’s jumps and fell off of his No. 2 perch.

There’s also a new top quarterback. Mesquite Horn’s Chris Robison — an Oklahoma commitment — jumped five spots to No. 7 and along the way passed Texas pledge Sam Ehlinger, the Westlake quarterback who slid two spots to No. 12. Robison and Ehlinger are by far the state’s top two passers, a safe distance ahead of TCU commit Shawn Robinson (DeSoto) at No. 28.

Those improving the most were Oklahoma pledges Robert Barnes, a safety from Southlake Carroll who shot up from No. 38 to 14, and Waxahachie’s Jalen Reagor, who is now the state’s top-ranked receiver after moving from No. 32 to 16.

The biggest drop belongs to that of another OU commit, Cedar Hill receiver Charleston Rambo, who fell 16 spots to No. 37.

Incoming and outgoing transfers shook up the list. Safety Grant Delpit, ranked No. 22 in April, was removed from consideration after he announced he’ll be leaving Houston Lamar to play his senior season at IMG Academy in Florida. Had he stayed in Texas, Delpit would’ve likely cracked our top 10 because he was that impressive at The Opening.

Added to the rankings was offensive tackle Chuck Filiaga, an Aledo import from California with offers from all of the top west coast schools. At No. 20, Filiaga is the highest-ranked player among the six newcomers. Round Rock defensive tackle James Lynch entered the chart at No. 49.

The American-Statesman’s Top 25: No. 16 Georgia