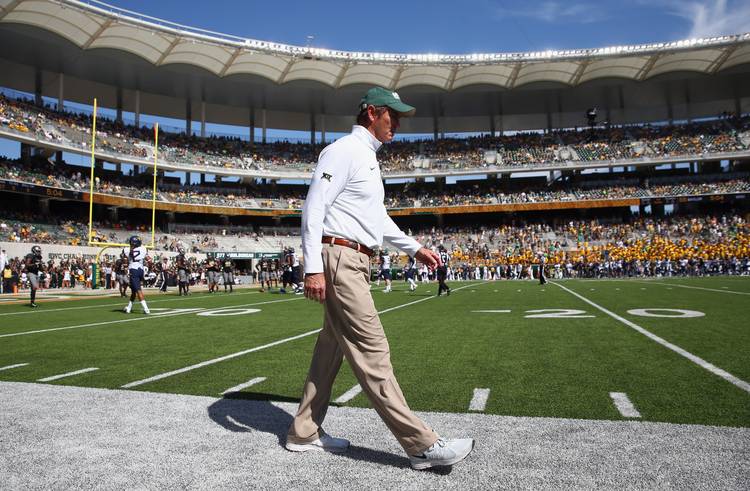 Former Baylor coach Art Briles landed the state's top-rated recruit in 2013, but wide receiver Robbie Rhodes played only one season before getting kicked off the team. (Tom Pennington/Getty Images)

So you may have heard, but Baylor had a bad offseason.

Confronted with allegations of school officials mishandling sexual assaults on campus, the school steeped in Baptist values was left with little choice in May but to fire football coach Art Briles, who revolutionized the once dormant program with a blinding offense, cool uniforms and a new stadium on the Brazos River.

Yeah, it was a rough offseason in Waco.

And it was a busy one for the rest of the Big 12, too. Texas, which had already landed a big recruiting class, added to it with four Baylor defections. Iowa State got itself a new coach, while Oklahoma and West Virginia picked up new quarterbacks.

And the conference added a new game, but did not — for now, anyway — add any new schools.

Here’s a rundown of the key offseason story lines for the Big 12, which gathers in Dallas on Monday and Tuesday for its annual media days:

After parting ways with Paul Rhoads, Iowa State tabbed Toledo’s Matt Campbell to turn around a program that’s won only four Big 12 games the past three years. Campbell, 36, was a consistent winner in the Mid-American Conference, piling up an average of more than eight wins in his four seasons with Toledo. One of his signature triumphs came last season in double overtime against — wait for it — Iowa State.

It took UT President Gregory L. Fenves hopping on a plane to get it done, but Texas convinced Tulsa offensive coordinator Sterlin Gilbert to change his mind and come to Austin. After being rebuffed by TCU assistant Sonny Cumbie, Longhorns coach Charlie Strong turned to Gilbert, a former Texas high school coach schooled in Art Briles’ uptempo offense. Yet the marriage wasn’t easy; Gilbert initially turned Texas down over concerns about the school’s commitment to the football program and to Strong.

Relegated to a backup role during Baker Mayfield’s star turn at Oklahoma, former Sugar Bowl MVP Trevor Knight left for Texas A&M as a graduate transfer. For now, it looks like a good fit, as Knight needed a change of scenery, and A&M needed a veteran quarterback after losing co-starters Kyle Allen and Kyler Murray to transfer. Knight was named the starter after the spring.

Texas assistant coach Joe Wickline, formerly of Oklahoma State, found employment at another Big 12 program, this time at West Virginia as Dana Holgorsen’s offensive coordinator. Wickline is hoping his stop in Morgantown goes better than his two years at Texas where he dealt with underachieving linemen and a lawsuit from Oklahoma State that alleged he’d violated the buyout in his contract with the Cowboys by taking a lateral position at Texas. Though Wickline held the title of offensive coordinator with the Longhorns, Oklahoma State fought to show that he did not call plays during games. In late December, Wickline settled for $250,000, a bargain compared to the almost $600,000 Oklahoma State had sought.

Closing powerfully for the second year in a row, Texas landed seven recruits either on national signing day or on the eve of signing day. The biggest 11th-hour gets were linebackers Erick Fowler (Manor) and Jeffrey McCulloch (Fort Bend Davis) and defensive lineman D’Andre Christmas-Giles (New Orleans St. Augustine). In the end, the Longhorns took their bows on national TV and signed the country’s No. 11 class, climbing 34 spots from the end of the regular season. That leap continued this summer with the raiding of four Baylor signees, which put Texas at seventh nationally. Elsewhere in the Big 12, Oklahoma inked the No. 19 class followed by TCU (22nd), West Virginia (39th), Baylor (41st), Oklahoma State (45th), Texas Tech (46th), Iowa State (54th), Kansas State (75th) and Kansas (84th).

Following a winless rookie season, Kansas coach David Beaty announced he will be the Jayhawks’ new quarterbacks coach and play caller. The move demotes offensive coordinator Rob Likens to an all-encompassing role on the offensive staff.

West Virginia beefed up its quarterback room with the acquisition of former Florida passer Will Greer, who led the Gators to a 6-0 start in 2015 before testing positive for performance enhancing drugs. Greer, a former prep player of the year, will sit out this season.

Though he won’t be eligible to play until 201, Texas A&M transfer Kyler Murray excelled in his Oklahoma debut, throwing for two touchdowns and running for another in the Sooners’ spring game. Murray, a former five-star prospect from Allen, signed with OU on Christmas Eve after he could not resolve differences with A&M coach Kevin Sumlin.

One of the Big 12’s top players was suspended for using a banned substance. And get this, he’s a kicker. West Virginia’s Josh Lambert, a Groza finalist in 2014, will sit for three games to open the season.

For the second year in a row, the first Big 12 player selected in the NFL Draft was from West Virginia. Oakland took Mountaineers safety Karl Joseph at No. 14 overall, one spot before Baylor receiver Corey Coleman went to Cleveland. TCU receiver Josh Doctson gave the Big 12 a third pick in the first round when Washington took him off of the board at No. 22. Texas had just one player selected — defensive tackle Hassan Ridgeway, who went in the fourth round to Indianapolis.

The Oklahoma Supreme Court ruled that a surveillance video showing Sooners running back Joe Mixon punching a female student was a public record. The ruling allowed the Oklahoma Association of Broadcasters to go to trial for access to the video and overturned a previous decision saying the video is not a public document because Mixon was not arrested. For obvious reasons, OU and Bob Stoops want this situation to go away and to not face further questions about why they did not remove Mixon from the school following the 2014 incident. Media members who have seen the video describe Mixon’s actions as gruesome.

As punishment, Mixon accepted a one-year deferred sentenced and 100 hours of community service. He also was previously suspended for the entire 2014 season.

Citing the findings of an external review into the school’s handling of sexual assaults, Baylor suspended football coach Art Briles with the intention to terminate him. Additionally, chancellor Ken Starr was stripped of his presidential duties and athletic director Ian McCaw was placed on probation and later resigned. According to the law firm Pepper Hamilton, Baylor officials for years had failed to thoroughly investigate and properly punish football players for violence against women. The implication is that Baylor, during its unexpected rise to national contention, placed winning above the protection of its students.

Baylor, having parted ways with Briles, hired former Wake Forest coach Jim Grobe as its “acting” coach for 2016. Grobe went 77-82 in his 13 seasons at Wake Forest, including an Orange Bowl appearance in 2006.

Though there was no resolution to the ongoing discussion of conference expansion, the Big 12 meetings in Dallas did deliver significant change. Believing it needed to position itself better to make the College Football Playoff, the league approved the revival of a Big 12 championship game beginning in 2017. Not only could playing a 13th game improve the résumé of the league champion, but all conference teams will benefit from shared TV revenue of up to $30 million. Additionally, the Big 12 reversed a decision from a day earlier and reinstated the year of eligibility lost by Oklahoma’s Mayfield when he transferred from Texas Tech. This means Mayfield will have two more years to play beginning this fall.

Despite pleas from Cincinnati, Houston, Memphis and others to join the conference, it looks as if the Big 12 will stand pat with 10 schools.

The purging at Baylor continued with the departure of backup quarterback Jarrett Stidham, who announced that he will transfer. The loss of Stidham, a former prized recruit from Stephenville, leaves Baylor with just one scholarship quarterback — freshman Zach Smith — behind starter Seth Russell.

Not afraid of a challenge, athletic director Mack Rhoades left Missouri to clean up Baylor’s mess. Rhoades worked previously at Houston where his signature hire was football coach Tom Herman, who led the Cougars to 13 wins last year in his first season. Naturally, the connecting of dots began; Herman is rumored to be candidate at Baylor.

The American-Statesman’s Top 25: No. 16 Georgia

The American-Statesman’s Top 25: No. 15 Michigan State