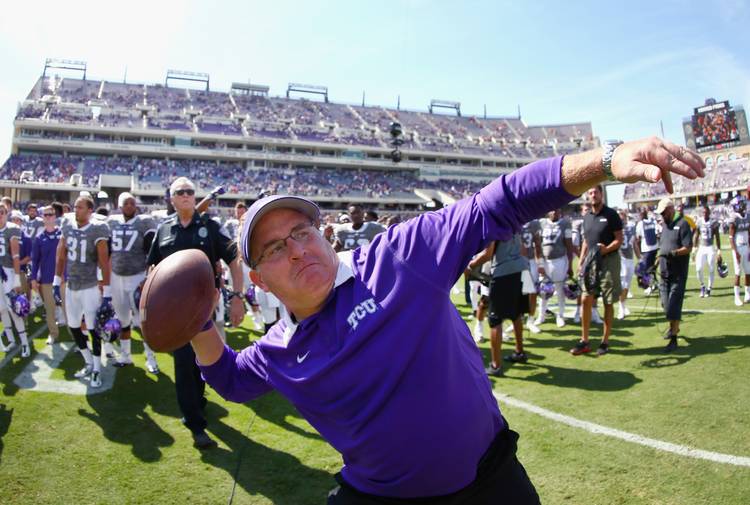 TCU head coach Gary Patterson throws a game ball into the stands after the Horned Frogs' 50-7 win over Texas last season. TCU again is expected to contend for the Big 12 title, but will have to do it without quarterback Trevone Boykin and wide receiver Josh Doctson, who have moved on to the NFL. (Tom Pennington/Getty Images)

The Horned Frogs will contend if … they find a quarterback to run the uptempo offense that defensive-oriented Gary Patterson embraced in 2014, along with a go-to receiver and a consistent runner — Trevone Boykin, Josh Doctson and Aaron Green have taken their talents to the NFL. TCU also must try to be successful with young players; there are only seven scholarship seniors on the roster.

INSIDE THE HORNED FROGS

Spring cleaning: TCU has lost only three games in two seasons, so it’s a given that other schools may want to poach members of Patterson’s coaching staff. But Patterson was able to retain all nine guys on his staff. Texas really wanted Sonny Cumbie, TCU’s young offensive co-coordinator. And Texas A&M tested the interest of Doug Meacham, who coordinates the offense with Cumbie.

Five things to watch for at Big 12 media days