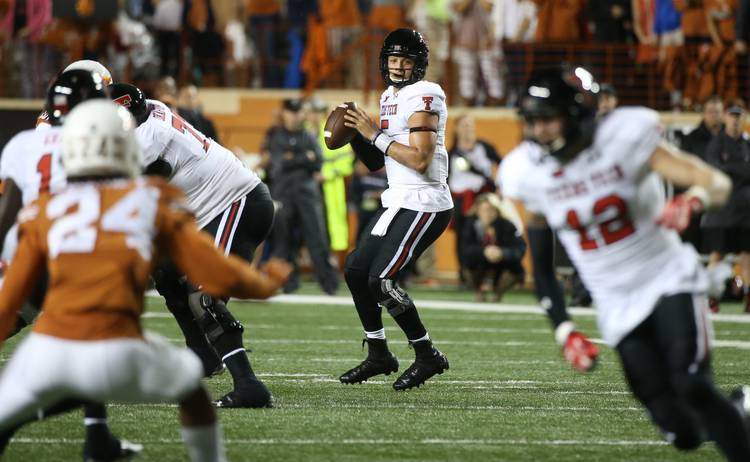 No longer splitting time with baseball, his second love, Mahomes told reporters at Big 12 media days he got even stronger this spring because he had time to “compete 100 percent in the weight room.” This looks like bad news for the rest of the conference, which has two more years before it’s done with Mahomes, a junior who has already wracked up 6,200 yards passing.

A pitcher and a third baseman with the Red Raiders, Mahomes, the son of a former Major Leaguer, said he hung up his glove this year so he could focus all of his energy on spring practices and developing rapport with his pass-catchers. Additionally, Mahomes said it was beneficial to throw only footballs because the arm angle required to throw a baseball upset his passing mechanics.

“I think he saw the success we had last year and where we could take this thing with a little extra work,” Tech coach Kliff Kingsbury said. “He was doing some things at an entirely different level than he was even in the fall. He understands our system so much more. He sees the defensive game so much more.”

If Tech can improve upon a 7-6 season, Mahomes will likely be up for national awards and contend for Big 12 player of the year honors against other star quarterbacks in the league such as Oklahoma’s Baker Mayfield and Oklahoma State’s Mason Rudolph.

Yet Mahomes made it sound like baseball isn’t completely out of his system. Had he stuck around to play for Tim Tadlock’s squad this spring, he would have joined the Big 12 champion Red Raiders in Omaha for the College World Series.

“I wouldn’t say forever,” Mahomes said. “There’s always an opportunity, but for now it’s all football.”

Tech voted for Baker: Oklahoma quarterback Baker Mayfield had an unlikely school backing his bid for an extra year of eligibility — Texas Tech.

Showing no bitterness over the messy divorce from 2013, Kingsbury told reporters the school voted for Mayfield to reclaim the year he lost when he transferred in the conference to Oklahoma.

The Big 12 announced in June that Mayfield and other walk-ons who transfer in the conference will be able to redshirt and not lose a year of eligibility.

“I think going through that entire situation with how it played out, I like the kid and I would not want him to lose a year in his career,” Kingsbury said. “We thought that was the right thing to do.”

NCAA violations?: Baylor interim president David Garland said he’s unsure whether the NCAA will sanction the football program as a result of a sexual assault scandal that forced the firing of coach Art Briles.

“I can’t answer for the NCAA,” Garland said, “but we have communicated openly with them. We visited with them immediately. That was before I became president. We are willing to be open, and I can’t answer for what they’re going to do.”

Garland was on hand for the introductory press conference of new athletic director Mack Rhoades, who was hired from Missouri last week.

Rhoades said he has yet to meet in person with new coach Jim Grobe, but the two have talked on the phone. There have been reports that Baylor already has contacted Houston’s Tom Herman, whom Rhoades hired when Rhoades was the athletic director of the Cougars.

“I will be open-minded,” Rhoades said. “We will look to see how the season goes. We will begin to identify the process, potential candidates if need be. But we will have things lined up by the time the season ends if need be. Again, I go back to, you know, Coach Grobe right now is our head football coach and I’m going to get into the trenches and roll up my sleeves and work with him.”

Garland said that unless new information comes to light there will be no additional changes to the coaching staff this season.

New Baylor … in Ames?: First-year Iowa State coach Matt Campbell says he has visions for the Cyclones to be the Big 12’s next Baylor and in time vault into a national title contender.

Campbell, who led Toledo to the Top 25 multiple times in four seasons, sees similarities between ISU and Baylor, as well as with other mediocre-turned-contenders like Oregon and Clemson.

“The similarities are they’re small towns, they’re college towns,” Campbell said. “They didn’t have great tradition before the ball started to roll. I think what they did is they used what they had to their advantage. One of the things that we have (similar to) Oregon and Clemson is a great fan base. We got great facilities. There’s really some great starting points there.”

Nixon out: Shaun Nixon, who was supposed to be vying with Kyle Hicks for TCU’s top running back, will miss the season because of injury.

Coach Gary Patterson announced the news Monday, but did not say what injury Nixon suffered or when it happened. TCU, in general, doesn’t announce specifics of injuries. However, Nixon, of Lake Travis, has had knee issues in the past and sat out the 2014 season.