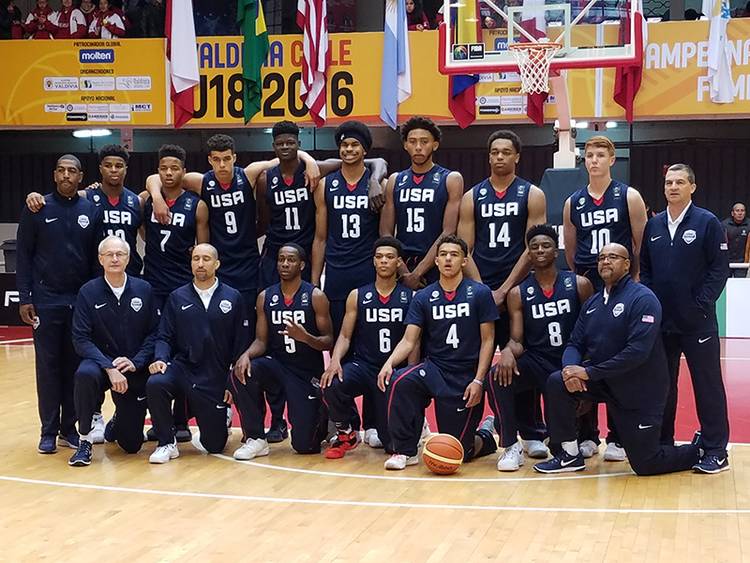 Team USA's Under-18 started off the FIBA Americas U18 championship with an easy win over Puerto Rico on Tuesday in Chile. (Photo by USA Basketball)

Texas freshmen Jarrett Allen and James Banks are now 1-0 with coach Shaka Smart. That victory came in Chile, though, not at the Erwin Center.

Allen had 18 points and Banks had four rebounds in Team USA’s 103-70 blowout win over Puerto Rico on Tuesday in the opening game of the FIBA Americas U18 championship.

“I think we played pretty well for it being our first game,” Allen told reporters afterward. “We had spurts where we played slow and had too many turnovers, but once we got into our groove, we got better.”

Allen was 9-of-15 shooting with eight rebounds in 21 minutes. Banks had four points on 2-of-6 shooting and played nine minutes. Michael Porter Jr. led the way with 20 points as the U.S. squad shot 52.5 percent overall.

“We had typical first-game jitters — a lot of execution mistakes and some defensive breakdowns from a lack of communication, but the energy was really good,” Smart said. “And I thought as the game went on, our guys really settled in and played together.”

Asked about the team’s overall chemistry, Allen said, “It was pretty good, but we have a lot to improve on. We need to all feed off of each other.”

Team USA’s next game is Wednesday afternoon against the Virgin Islands.

Texas-Michigan set: Texas has reached a home-and-home agreement with Michigan that will start this season in Ann Arbor, Mich., according to CBS Sports. The Longhorns will host the Wolverines during the 2017-18 season.

Texas last faced Michigan in a second-round matchup in the 2014 NCAA Tournament. The Wolverines were practically unstoppable from long distance, hitting 14 of 28 3-pointers en route to a 79-65 win in Milwaukee.

Texas notebook: A bunch of freshmen, but no kickers — yet