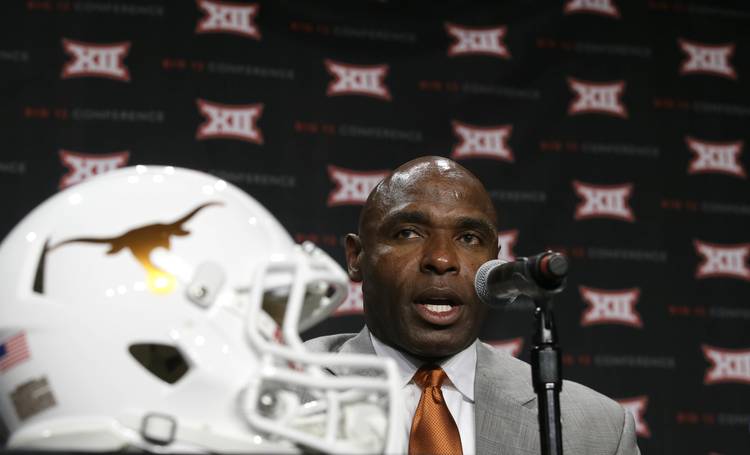 DALLAS — Charlie Strong joked Tuesday that he added recruits from three different signing days — the big day in February, the early one in December, and last month when the Longhorns pounced on Baylor’s misfortunes and snatched four of the Bears’ recruits.

Curiously, Strong burned through all three of the periods without taking a kicker. And sure enough, Strong said his biggest worry entering this season is who among a handful of walk-ons he’ll trot out to kick field goals and extra points.

“That position is my biggest concern right now because I feel like I have depth everywhere else,” Strong said.

Which begs this question: Aware that he had to replace senior Nick Rose, why did Strong not acquire a scholarship kicker? After all, the Longhorns are bringing in 28 newcomers.

Strong said all of the good kickers were snatched up before Texas could get them.

“The good ones committed early, so we weren’t just going to sign someone just to sign them,” Strong said.

For now, Strong is without a scholarship kicker, but he cracked that walk-ons like Mitchell Becker, Jon Coppens and Evan Moore “can earn a scholarship.”

None of those kickers were especially productive during the spring, so Strong is setting expectations low heading into camp.

Fowler update: Although linebacker recruit Erick Fowler has yet to be cleared academically, Strong sounds confident he’ll be with the team for the first practice on Aug. 6.

“He’s still getting things cleared up,” Strong said. “He isn’t on campus yet. He has one class he’s finishing up. When we start camp, he should be ready to go.”

Last month, Fowler, a four-star prospect from Manor, told the American-Statesman that he had the green light to join the team after getting results of his SAT score. Apparently, he had additional work to do, but it sounds like it’s being done.

Strong visits Dallas PD: While he was in town, Strong stopped in and visited the Dallas Police headquarters to express his appreciation following the July 7 murders of five of the city’s officers at a protest for Black Lives Matter.

“It was just us going by there and letting them know how much we appreciate them and that our thoughts and prayers are with the families that were lost,” Strong said. “We need to have a conversation all across this country right now and it’s time to unite and to stand together.”

To that end, Strong said he spoke with his team last week and advised them on proper interaction with police officers.

“Speak the right way,” Strong said he told them. “All of you know how to carry yourself. That saves a lot of conversation. We have to unite, we have to stand together. A lot of people look up to University of Texas football players, so when you’re in the community, let’s make sure you’re carrying the right message, you’re saying the right things and you’re doing the right things.”

Perkins to guard?: If it were up to him, Kent Perkins would slide inside from tackle and play his senior season at guard, where his wide frame is better suited.

However, with thin depth on the line, he may have to play out of position for the second year in a row.

“We’ll explore all options and make sure Perk is happy,” Strong said. “He can do a lot of things and play a lot of different positions on the offensive line.”

Though he insists he’ll line up wherever he’s needed, Perkins said, “I feel like I’m better equipped to play guard.”

Asked which players are primed for breakout seasons, the first named Strong mentioned was that of Perkins.

Short yards: Strong said his team should be fully healthy for the start of preseason camp on Aug. 6. That means a clean bill of health for quarterback Jerrod Heard, who missed much of spring ball with a shoulder injury. … Speaking of Heard, Strong said there are no plans to move the quarterback to receiver. Same goes for quarterback Kai Locksley. … Strong said he’s still running five miles every morning, but that his split times have decreased with age. Once able to knock out eight-minute miles, Strong said he’s slowed to “10:50 to 11 minutes.”