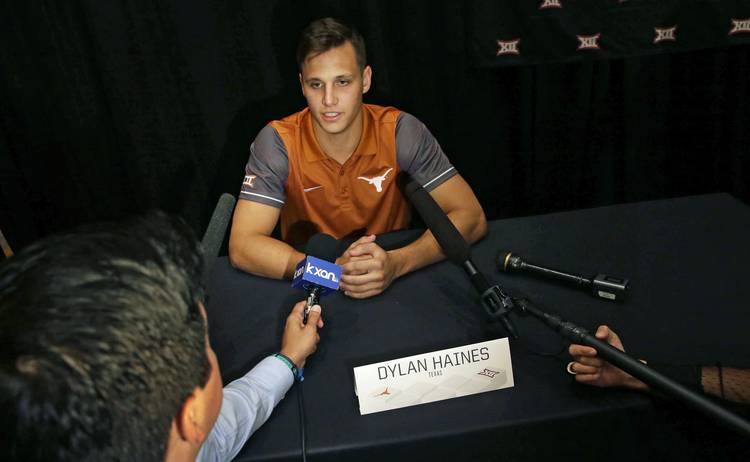 DALLAS — Las Vegas predicts things will not go well in Austin this season. Oddsmakers set the line at 6.5 wins for Texas and third-year coach Charlie Strong.

Optimism was rampant at Big 12 media days. There were healthy doses of realism among those in burnt orange, too.

“I think at the end of the day, losing at the University of Texas is not a good look,” fifth-year defensive tackle Paul Boyette said.

Would six wins be enough for Strong to keep his job beyond this season? Seven? Will it take eight or more? “There’s no reason for us to go 6-7 and 5-7,” Strong said, noting his two-year record is 11-14. UT hasn’t posted three consecutive losing seasons since the 1930s.

“You want to see progress,” he said. “I totally agree with that.”

Reporters inside the Omni Hotel were like many UT fans. Everyone is searching for something positive about this team.

The most notable figure was nowhere to be found, though. Sophomore linebacker Malik Jefferson, the Big 12’s preseason defensive player of the year, was in Austin. Usually, only upperclassmen are brought to this event.

So what should get Texas fans excited? To hear Strong tell it, there’s a laundry list of positives.

“Malik, he’s earned it. Malik has done a really good job,” said Strong, who then rattled off a host of familiar-yet-young names.

Running backs D’Onta Foreman and Chris Warren III should both feel good about an offensive line armed with reinforcements. On the flip side, six highly-regarded defensive line recruits are on campus this summer trying to assimilate into the UT way.

Strong said senior Tyrone Swoopes would play against the Fighting Irish just to keep using the so-called “18 Wheeler,” UT’s successful short-yardage package. As for Buechele, Strong said, “When you have a guy like Shane working the way he works, it rubs off on the whole team.”

Texas is positioned to have one of the youngest depth charts in college football. Last season, it had one of the most vocal rosters, too.

But something has clearly changed. Fans don’t see the same social media crowing from the young Longhorns they saw in 2014 or 2015.

The perceived cultural gap between the older Mack Brown players and the Charlie Strong recruits is smaller than its ever been. “We’re starting to shrink that gulf,” Bluiett said. “I can tell you it’s probably the size of a puddle now.”

Haines said every veteran in the locker room is responsible for the team’s overall record now. Nobody can point fingers and say one group didn’t hold up its end over another. Eight of Strong’s 14 losses have been by 20 points or more. Four were by 34 or more.

“Now we’ve all been part of losing teams, and I think now everyone understands it takes a lot more to win that just showing up,” Haines said. “It takes a lot to win at this level, it really does.”

There were no brash predictions of winning the Big 12 title or talk of monumental upsets. The seniors at Big 12 media days simply want the fans’ support. Momentum is building, they promise. Just hang in there, Texas fans.

“I believe we have the potential to win every game,” Bluiett said. “The thing with me and the fans, I just believe the fans should stay behind us and stay fully committed. We can’t have any fair-weather people to bring things down.”