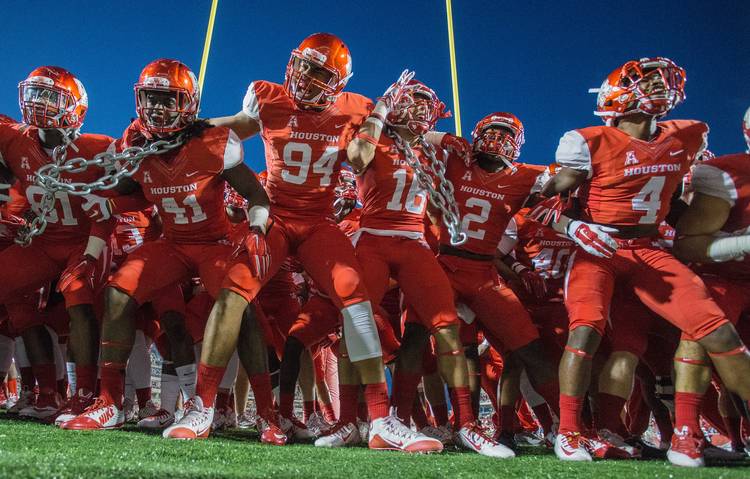 Houston Cougars prepare to take on the Memphis Tigers on November 14, 2015 in Houston, Texas. (Photo by Bob Levey/Getty Images)

Good news travels fast these days, even reaching the French Riviera in seconds.

Currently on vacation in Monte Carlo, Houston billionaire Tilman Fertitta said he learned of the Big 12’s decision to examine expansion via phone notification. And then calls started pouring in from what he called “one of the greatest cities in America, which is Houston, Texas.”

For the Houston Cougars, the opportunity to join the Power Five may finally be here. The Big 12 may add two to four teams, and the UH System Board of Regents chairman couldn’t be more excited.

“I think the Pac-12 is going to add two (teams) and the Big 12 is probably going to add four, at least that’s what I hope,” Fertitta told the American-Statesman in a phone interview. “We’re just excited to come to the dance and show what we have. I think the University of Houston has come a long way. I think we’re a much better school academically and athletically than we were even in the ‘80s.”

Fertitta said UH officials expect to hear soon about the Big 12’s next steps, possibly within days. Houston could make a formal presentation to Big 12 administrators in four to eight weeks.

Multiple sources told the American-Statesman that Texas officials were initially skeptical of Houston’s push to join the Big 12. However, UT will not block Houston from joining, the sources said.

The real problem may come from out-of-state schools, like Oklahoma or Kansas. It’s thought those schools are leery of adding a fifth Texas school to the mix. Eight of the current 10 members must vote to approve new schools.

Do not mistake Fertitta’s tone. He does not view Houston as subservient to UT. The Cougars have dramatically changed their academic and athletic profile in the last decade.

Houston officials pitch the school’s Tier One status as one of the nation’s leading research institutions. The school, with an enrollment of more than 43,000 students, is situated in the fourth-largest city in America. UH openly touts $240 million in facility upgrades. More than 21,000 season tickets have been sold at TDECU Stadium, which holds 40,000.

The Cougars also have one of the hottest football coaches in the nation. Tom Herman’s name is widely bandied about anytime talks about possible future openings at Texas or Texas A&M. UH went 13-1 last season and beat Florida State in the Peach Bowl.

Fertitta was unsure exactly how fast the Cougars could leave the American Athletic Conference and jump into the Big 12. For example, Rutgers had to pay a $11.5 million exit fee to leave the AAC in February 2014. “I know that we have a big exit fee,” said Fertitta, who did not know the precise number.

Bowlsby initially said the Big 12 could have new schools in place prior to the 2017-18 school year, although he backed off that timeline on Wednesday.

“I’ve seen amazing things happen in college sports,” Fertitta said. “I know for the University of Houston fans, that would be very exciting to have Oklahoma and Texas playing here in ’17. If they told us that’s what they wanted to accomplish, I know this chairman would do whatever he could to make it happen.”

So, the Big 12 will expand? Let the speculation begin

The American-Statesman’s Top 25: No. 10 Notre Dame