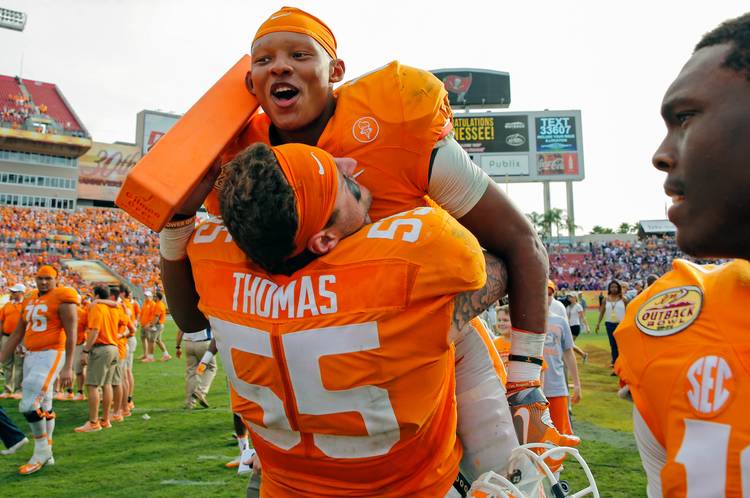 Tennessee's Joshua Dobbs is lifted by Volunteers is lifted by offensive lineman Coleman Thomas in celebration after the win over Northwestern in the Outback Bowl. (Mike Carlson/Getty Images)

The Volunteers will contend if … their experienced backfield continues to show promise. The top five rushers from 2015, led by RB Jalen Hurd, return this fall. Hurd was the SEC’s fourth leading rusher last season.

Spring cleaning: For the second straight year, Tennessee didn’t have a player taken in the NFL draft, though Williams did take part in an Atlanta Falcons mini-camp. … The university announced it will cancel classes on Sept. 1 — a Thursday — to make way for the season opener against Appalachian State. The game would have created logistical and traffic problems, officials said. … One notable hire was defensive coordinator Bob Shoop, who spent the last two years as Penn State’s defensive coordinator.

No. 8 Coming Saturday. Want a hint? This school has produced the most number of quarterbacks taken with the No. 1 overall pick of NFL drafts since 1950 — four.

Oklahoma’s Samaje Perine: Letting his legs do the talking

Several top recruits to visit Texas for Under the Lights