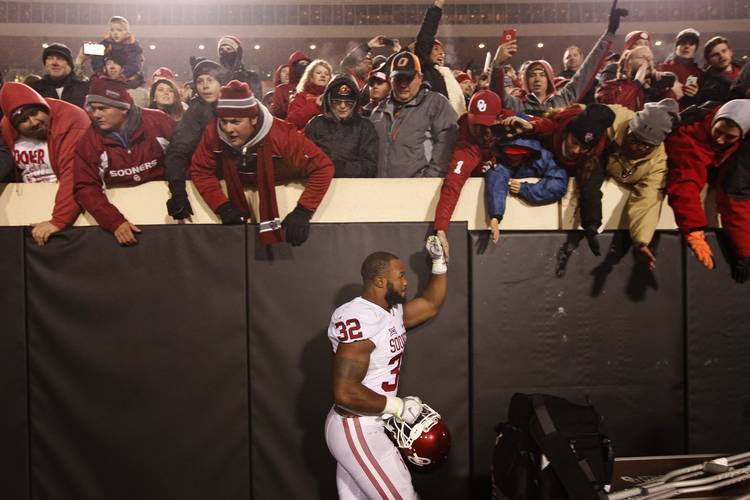 DALLAS — Laid up recovering from ankle surgery, Oklahoma running back Samaje Perine went through spring practices without much participation.

So he killed time doing something else he enjoys.

Perine has been tuning into the real life crime TV show since he was young and says he watches it “more than I watch sports.” That Perine recently changed his cable package and no longer has the station that carries “Cops” is probably a good thing because he’s healthy and ready to get back to work.

Heading into his junior season, the Hendrickson product is in position to become the top rusher to ever come out of Oklahoma, which, when you stop and think about his competition, is pretty incredible.

So when the year is over, there’s a chance — a good one even — Perine will have done it better than Sims, Adrian Peterson, Gregg Pruitt and everyone else who has carried a football for the Sooners.

All of this came as news to Perine, who is unusually humble for a star and would rather have been doing anything else Tuesday afternoon than spending 90 minutes speaking with reporters at the Big 12 media days.

If Perine continues to run through and around defenses, this will likely be his final year in Norman before he turns pro and enters the NFL Draft. After several years of shunning running backs early in the draft, NFL teams are beginning to circle back and covet players at the position. The way it looks, the 5-10, 235-pound Perine has the makeup to join the Dallas Cowboys’ Ezekiel Elliott (2016) and the Los Angeles Rams’ Todd Gurley (2015) as a top-10 pick.

Expectedly, Perine wouldn’t bite on NFL talk. He said his focus is on the start of practices next month and on the Sooners’ anticipated opener against Houston in a potential Top 10 matchup at NRG Stadium. It’ll be Perine’s first appearance since he broke his ankle in a playoff semifinal loss to Clemson in the Orange Bowl. With OU’s other back, Joe Mixon, suffering a concussion and leaving the game, Perine couldn’t get much going on his own and finished with 58 yards and a touchdown on 15 carries. The Sooners were flattened after halftime, falling 37-17.

Perine said his ankle started feeling well a month or two ago and that the break from football “gave me a chance to get my body back under me.” He says he’s in the best shape of his life, which is really saying something considering he can bench 450 pounds and squat at least 600 pounds. Of the standard 225-pound bench press, Perine said he put up 35 reps in high school and that he might now be able to hit 40.

Combined with Mixon, who ran for 753 yards and seven scores his freshman season, Perine helps form a backfield duo that is as talented as any Sooners coach Bob Stoops says he’s had in his 18 seasons at OU. Perine and Mixon, along with quarterback Baker Mayfield, the Big 12’s preseason player of the year, are the biggest reason the Sooners are the clear pick to win the league title. Do that, and they’ll have a good chance of making it back to the College Football Playoff for the second year in a row.

“These guys are such all-around players,” Stoops said of Perine and Mixon. “They’re amazing when you watch the coaches’ version of the end zone copy. The holes they pick and the patience they have. Then you notice the obvious, the strength and power and they rarely get caught. They’re unusually fast for that size, so they have it all. … I’m trying to think of some of the other tandems and I don’t know that I’ve had two of that quality.”

Perine enters this season No. 10 on the Sooners’ all-time rushing list, but is within striking distance of Billy Sims’ career record — only 1,056 yards away:

Big 12 deal may be brewing between UT, Houston

The American-Statesman’s Top 25: No. 9 Tennessee