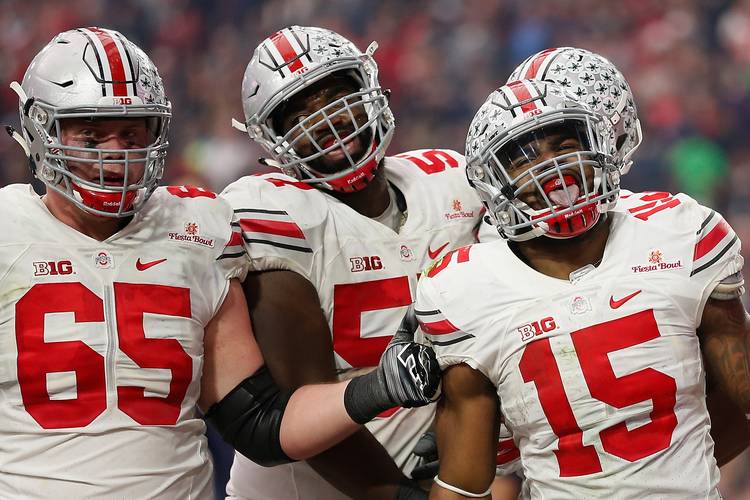 Star running back Ezekiel Elliott (15) is now a Dallas Cowboy, but Ohio State's roster has been stocked by highly-regarded recruiting classes. One of those recruits -- center Pat Elflein (65) -- was the lowest-rated prospect signed by Urban Meyer in 2012, but has developed into a potential first-round pick for the 2017 draft. (Christian Petersen/Getty Images)

The Buckeyes will contend if … they reload rather than rebuild. Ohio State returns six starters, the fewest of all 128 FBS teams. But one of those is J.T. Barrett, the slick junior quarterback who knows how to operate Urban Meyer’s quick-tempo offense. Don’t weep for the Buckeyes; new stars are poised to emerge on a roster that’s been stacked by one great recruiting class after another.

Spring cleaning: The Buckeyes smashed an NFL draft record with 12 selections in the first four rounds. Nine players declared early for the draft, two shy of LSU’s 2013 record. … The Bucks dismissed senior RB Bri’onte Dunn last week after a domestic abuse allegation. … The spring game, while encouraging in many ways, also showed rough spots with 16 new starters. … The catch of the offseason was co-defensive coordinator Greg Schiano, the former Rutgers and Tampa Bay Bucs head coach. … The Buckeyes received 27 of 39 first-place votes in the Big 12 preseason media poll, and are the No. 5 choice in Vegas to win the national title, bet down from 10-to-1 to 8-to-1.

The American-Statesman’s Top 25: No. 8 Stanford