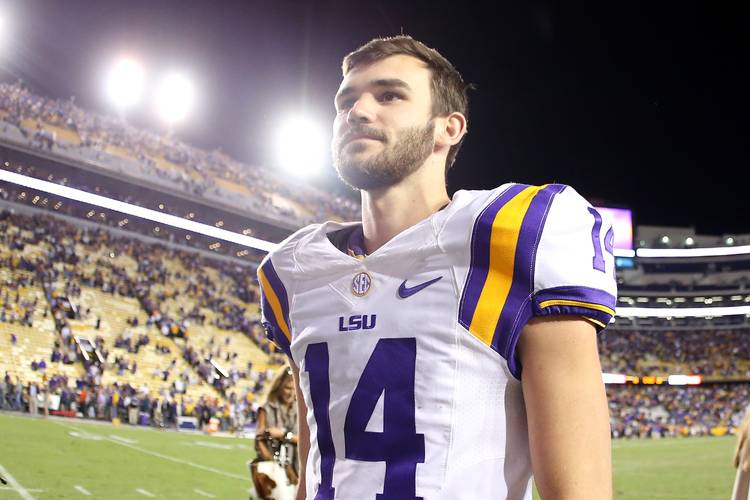 Trent Domingue #14 of the LSU Tigers walks off the field after defeating the Florida Gators 35-28 at Tiger Stadium on October 17, 2015 in Baton Rouge, Louisiana. (Photo by Chris Graythen/Getty Images)

Last season with the Tigers, Domingue was a semifinalist for the Lou Groza Award, presented annually to the nation’s best kicker. And he was already on the Groza watch list for 2016.

Initially a walk-on at LSU, Domingue nailed 13 of 17 field goals last season and was 49 of 50 on extra-point attempts.

Domingue’s transfer had been rumored for weeks, but Strong had to be relieved to finally see it come true. “Great news to kickoff Sunday! #LetsRide,” Strong posted on his Twitter account.

At Big 12 media days, Strong didn’t seem to excited about his prospects at the crucial position. Walk-on punter Mitchell Becker was the only specialist Strong mentioned by name. During the spring game in April, Becker missed badly on a 46-yard field goal attempt. Afterward, Strong said, “Gotta get me one somehow.”

It’s mind-boggling how Strong has been so blasé about the kicking situation, especially after kicking mistakes cost the Longhorns at least two games last season.

“The good ones committed early, so we weren’t just going to sign someone just to sign them,” Strong said at Big 12 media days.

Domingue became available after LSU coach Les Miles did not renew the kicker’s scholarship for 2016. “My career here at LSU has come to an end,” Dominique posted on Twitter earlier this month.

The American-Statesman’s Top 25: No. 7 Ohio State