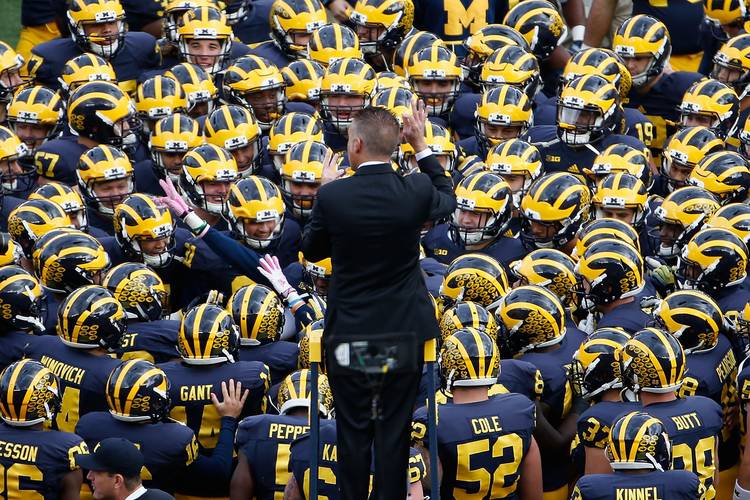 Michigan players take the field prior to last year's game with Michigan State. The Wolverines will have to face some of their biggest matchups this season on the road -- at Michigan State, at Ohio State and at Iowa. (Christian Petersen/Getty Images)

The Wolverines will contend if … they finish ahead of rivals Michigan State and Ohio State in the Big Ten East and then beat the West champion, which is favored to be Iowa, in the conference title game. It won’t be easy; the Wolverines have to go on the road to play Michigan State, Ohio State and Iowa, all of whom finished last year ranked in the nation’s top nine. Still, the belief is that Jim Harbaugh will work enough magic to have the Wolverines in the hunt. Harbaugh still must announce a starting quarterback, but considering his success at having developing Andrew Luck (Stanford), Alex Smith (San Francisco) and Colin Kaepernick (San Francisco), and Jake Rudock (Michigan), this is not a major concern.

Spring cleaning: Harbaugh lost his defensive coordinator, D.J. Durkin, who left to become Maryland’s head coach and he filled the vacancy with former Boston College defensive coordinator Don Brown, who had the nation’s top-ranked defense in 2015. Harbaugh also got a new boss with Michigan graduate Warde Manuel, who’s returning to Ann Arbor after heading Connecticut’s athletic department for several years. Oh, and you may have heard that Harbaugh did a bit of traveling this summer, criss-crossing the country for satellite camps. At each stop, he wore a football or basketball jersey of a famous athlete from that area.

No. 5: Coming Wednesday. Want a hint? This school’s 2016 schedule includes Ohio State and Houston. And Texas.

Back in Austin wearing gold, Longhorns ready to focus on upcoming season