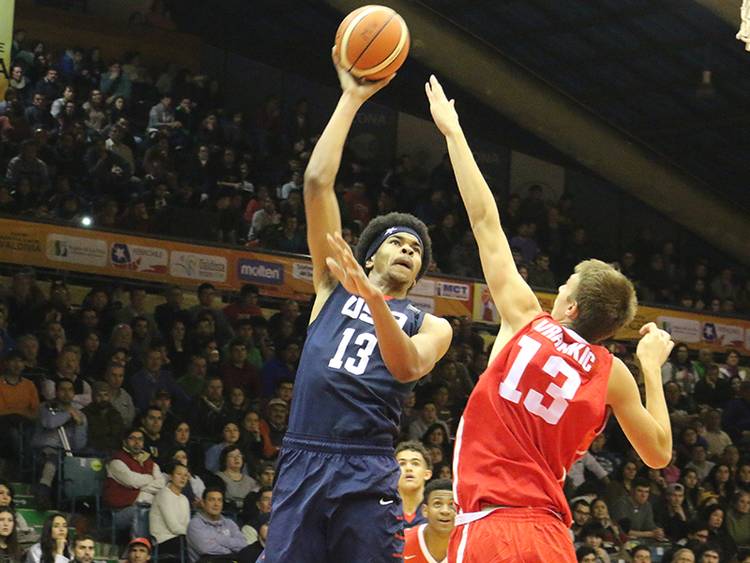 Shaka Smart is back in his element this week, back at work inside Cooley Pavilion and back wearing his normal clothes, too. The Team USA threads are packed away, and on Tuesday Smart was wearing his Texas workout gear.

“I actually changed in the airport,” Smart said.

Smart and his two freshmen, Jarrett Allen and James Banks, are back home from Chile after helping USA Basketball’s Under-18 squad win the FIBA Americas U18 championship. Now all three can focus solely on helping the Longhorns.

Under Smart’s direction, Team USA went 5-0  and captured the gold medal. USA Basketball has now won the event all four times this decade.

“Well, I’ve coached with USA Basketball in the past, but we never had any of our guys even try out for the team, let alone make the team,” Smart said. “It was a really good experience for me and hopefully for those two as well. We got a chance to get to know each other off the court, but also on the court with how we interact.”

Allen and Banks, two athletic big men both measuring at least 6 feet, 10 inches tall, are projected to play major roles this season for the Longhorns. The team has said goodbye to Cam Ridley and Prince Ibeh, two solid rim protectors.

Allen stated all five games in Chile. The five-star recruit from St. Stephen’s averaged 10.6 points and nine rebounds per game while shooting 46.7 percent overall (21 of 45).

Allen’s recruitment was one of the most unorthodox journeys you’ll see. However, Smart said he learned the laid-back Allen has a “real competitive streak.”

“Jarrett is very intelligent. He’s got a real sense of right and wrong,” Smart said. “What I’ve learned about him is that it’s very important to explain to him in logical terms why A, B, and C goes into D, if D is being successful or winning or whatever that may be. If you can explain that to him, he’ll go after it.”

Banks is a tremendous package of raw athleticism. However, he didn’t play organized basketball until high school. The UT coaching staff believes there is unlimited upside for a player still learning the game, its intricacies and his capabilities.

“I actually told some of the other guys on the USA Basketball team, just wait until you see what James becomes,” Smart said. “He’s going to be very, very special.”

Asked why Banks didn’t play in the championship win over Canada, Smart said, “If I was just down there as the coach from Texas, I would have played those guys both the whole game. But that’s not the job I was asked to do.”

The Longhorns will spend what’s left of July and August finishing up summer school and going through offseason workouts. Official practice begins in October. The season opener is Nov. 11 against Incarnate Word at the Erwin Center.

The American-Statesman’s Top 25: No. 5 Michigan

The American-Statesman’s Top 25: No. 4 Oklahoma