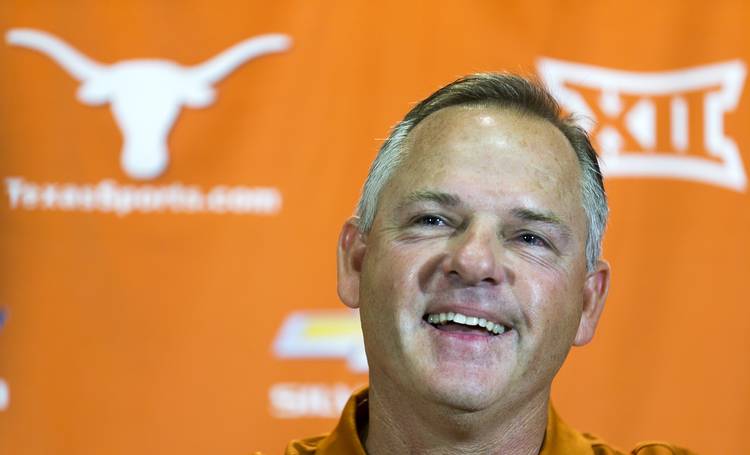 At long last, the outfield walls at Texas’ baseball stadium could be moving closer to home plate.

This is reason for a home run celebration for run-starved Longhorns supporters, whose new coach, David Pierce, is pushing for a modification of cavernous UFCU Disch-Falk Field because “we don’t want to lose fans because of lack of offense.”

On Wednesday, Pierce conveyed to a handful of reporters his blueprint for invigorating the Texas program which, among other alterations, includes bringing in those darned fences, a move that many fans and players will likely view as long overdue.

For now, talk is preliminary and nothing has been set into action. If change does occur, it’ll come after the Longhorns play at least one more season swinging away at a 405-foot wall in the alley in left center.

The hope is a smaller yard will stimulate an offense that for the past six seasons has failed to hit .270.

“It isn’t so much the playability as much as it is a part of the game that we’re missing a little bit, and that’s the three-run home run at the end of the game,” Pierce said. “It’s a fan favorite. … I think you’ll see we’ll be a very aggressive offense anyhow. We’ve been that everywhere we’ve been. It will be something we consider and it’s in discussions whether or not we do it.”

Pierce, who has been on the job for less than a month, may have applied a literal sense to the term “rebuilding project” because he has additional renovations in mind. Prior to the start of next season, brown turf will be installed around the bases and on the warning track because Pierce says the burnt orange turf, which is currently in place, is too much of a traditional orange. Additionally, the Longhorns logo positioned just beyond second base will be moved deeper to center field and made larger.

And that’s not it. If Pierce has his way, by this time a year from now there will be shovels in the ground along the right field line for construction of an indoor facility that would replace a modest setup of a couple of outdoor cages with nets. Pierce’s proposed facility would be climate controlled and would house batting cages and a pitching laboratory along with video equipment.

It sounds like the softball team also would use the amenities.

“That’s kind of on the agenda, but for the most part, the facilities are in pretty good shape,” Pierce said.

Recruiting: Those who follow Pierce on Twitter — about 2,600 users — may be wondering why he’s been sending out pictures of Bevo with the hashtag #40ACRESFAMILY. This is his way of announcing he had landed a recruit, sort of like Charlie Strong’s #Letsride tweet.

Judging by his number of posts, Pierce has picked up six recruits since being introduced as coach on June 30.

Among the acquisitions are Cedar Park right-handed pitcher Cole Quintanilla, a 2017 prospect who changed his commitment from Missouri, and Dallas Jesuit shortstop Jaden Woodson, the son of former Dallas Cowboys safety Darren Woodson. Woodson, along with Argyle second baseman Brenden Dixon, are part of UT’s 2019 class.

Pierce said recruiting at the state’s flagship school comes with advantages he did not have at Tulane or Sam Houston State.

“I think you find at a place like Tulane you can still get some of the best players, but you’re just not gonna have the opportunity to get as many,” Pierce said. “I think we’re finding out we’re a trademark school. We represent the state and there’s a lot of interest. … My hope and intent is that we can get a better caliber of player coming in.”

Pierce said that although nothing is official, he hopes to acquire a Division I transfer and a junior college transfer, which appears to be Blinn right-handed pitcher/shortstop Beau O’Hara, who announced on Twitter his intention to join Texas despite his signing with Tulane in May. This past year, O’Hara struck out 46 batters in 42 innings with 14 walks and a 5.15 ERA.

In landing top talent, Pierce acknowledged Texas has fallen behind TCU and A&M in the state’s arms race.

“Honestly, right now TCU is the Rice of the mid-2000s and A&M is the Texas,” Pierce said. “Here in the last four or five years, they’re dominating the recruits and have kind of dominated the state. It’s important for us to get back in the game.”

Tasked with the heavy lifting in recruiting are assistants Sean Allen and Phillip Miller. During campus visits, Pierce and director of operations Drew Bishop play the role of closer.

Schedule: Speaking of A&M, Pierce said the Aggies will come to Austin next season for a mid-week game. It’ll be a return trip from last year’s meeting in College Station, which the Aggies won on a walk-off home run. Additionally, UT will twice play A&M-Corpus Christi — once in Austin and also at Whataburger Field, the home of the minor league Corpus Christi Hooks. It’s all about recruiting in south Texas, Pierce said.

Texas also will play at Sam Houston State and will travel west to continue its series with Stanford. Pierce is still looking for an opponent to play the Longhorns at Constellation Field in Sugar Land.

As for future scheduling, in 2018 UT will begin a home-and-home series with LSU.

The American-Statesman’s Top 25: No. 4 Oklahoma

Texas countdown to football: 5 games from the 1990s to remember