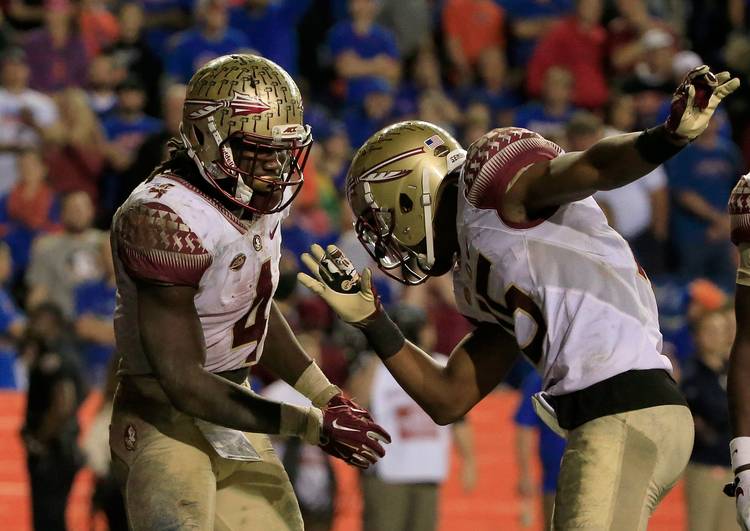 Two of Florida State's most dynamic offensive players from 2015 -- running back Dalvin Cook (left) and wide receiver Travis Rudolph (right) -- return for the Seminoles in 2016. The duo combined for 26 touchdowns. (Sam Greenwood/Getty Images)

The Seminoles will contend because … they’re the most experienced of the top five teams in our poll and they own national-championship pedigree. In fact, No. 6 LSU, with 18 returning starters, is our only Top 25 team that welcomes back more starters than Florida State, which has 17, including everybody on offense.

Spring cleaning: The one and only question revolves around the most important position on the field — quarterback. Sean Maguire is back, but he is underwhelming. Redshirt freshman Deondre Francois looked good in the spring game, and it wouldn’t be surprising if he unseats Maguire at some point. Remember, Jimbo Fisher wasn’t afraid to turn the reins over to another redshirt freshman with high upside — Jameis Winston — in 2013. That worked out pretty well. … Recruiting went great again. The Noles signed the nation’s No. 2-ranked class behind Alabama, with 16 four- or five-star players. Their previous classes ranked No. 7 (2015), No. 4 (2014), No. 12 (2013) and No. 3 (2012) in the 247Sports composite ratings.

No. 2: Coming Friday. Want a hint? This school played in last year’s CFP title game. Have fun guessing. Your odds of getting it right are 50/50.

Texas countdown to football: 5 games from the 1990s to remember

David Pierce’s goal for Texas baseball: Get to the regional