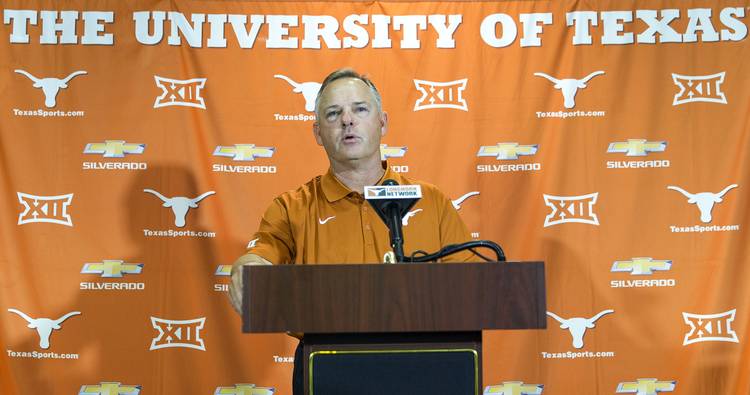 It’s becoming apparent the many differences between new Texas baseball coach David Pierce and his predecessor.

Pierce plays for the home run. Augie Garrido famously said that, given the chance, he’d bunt with Babe Ruth. Whereas Pierce speaks on the intricacies of the game, Garrido, the Zen Master, was something of a poet with his philosophical pronouncements.

And then there’s this: Garrido believed each season should conclude with a trip to Omaha for the College World Series. Pierce won’t go that far, but the new guy does acknowledge the Longhorns should be in the conversation annually to be playing games deep into June.

Simply put, the new aim is the NCAA regional, which Pierce has reached each year for the past 16 seasons, including the last five as a head coach.

“I truly think every year we should be in a position to have a chance, so that means we should be a regional team,” Pierce told reporters on Wednesday.

RELATED COVERAGE: David Pierce has renovation plans — for the team and the stadium

His message should not be a suggestion that expectations have softened. Likely, Pierce knows his tenure will be judged on the number of times he takes a team to Omaha — and how well they do once they get there — but to think it should happen every year, as Garrido said, is just plain silly, especially given the growing parity in the sport.

Eight teams make the College World Series each year. Twenty-seven schools have made up the last five CWS fields. Over those last five years, only 11 schools have made it to Omaha twice; of those 11, three — Florida and TCU — have been there three times. Texas was last there in 2014.

“I still like the thought and the echo that I hear around here — it’s Omaha,” Pierce said. “There’s still a lot of conversation of Omaha. I don’t think anybody’s looking at it differently. I think the realistic part of it is more and more people are starting to understand the (difficulty) to be there every year. There’s just a lot of good teams.”

Despite inheriting a team that won only 25 games in 2016, Pierce believes he can get things rolling right away. A solid nucleus returns including the Clemens brothers, Patrick Mathis, Travis Jones, Morgan Cooper and Nolan Kingham. Pierce, who is known in baseball circles as a keen developer of talent, will make a lot of people happy if he can correct whatever is ailing under-performing players such as Bret Boswell, Michael Cantu and Connor Mayes.

“We do feel like there’s some talent,” Pierce said.

Because most of his team is off playing summer ball, Pierce’s interaction with them has been limited to phone conversations. He’ll see plenty of them when the fall semester begins next month, and at that time he’ll try to foster an environment where the bullpen catcher feels just as important as the middle-of-the-order thumper.

Asked if he needs to change the program’s culture, Pierce replied, “I don’t know if it’s culture.”

So what is it?

“I think more than anything, the kids understand the tradition and where Texas has been and I think they put a lot of pressure on themselves to be that,” he said. “And so we’ve got to relax them a little bit more.”

It drove Garrido mad the past two seasons that he couldn’t get his players to perform loose and free. If the new guy can unlock that formula, he’ll be on his way to a regional. And maybe even Omaha.

The American-Statesman’s Top 25: No. 3 Florida State

Texas countdown to football: How the last 5 UT coaches fared in year 3