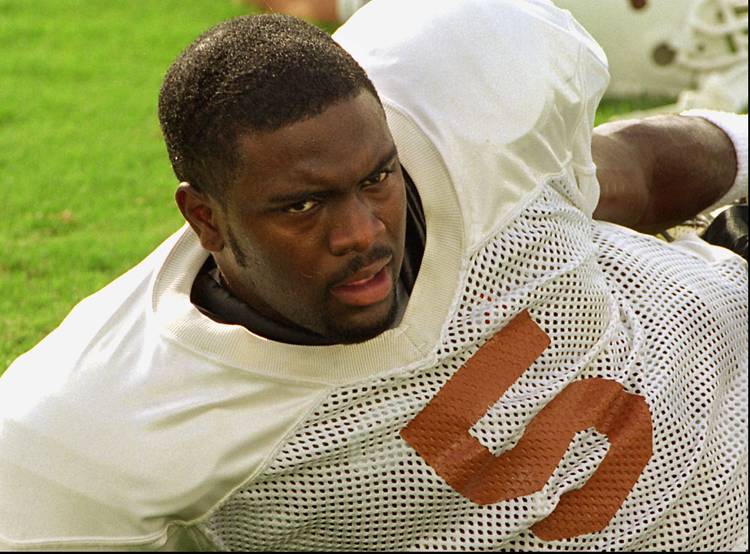 Later today, Hillary Clinton will give a speech at the Democratic National Convention. A Clinton giving a speech? What is it, 1996? Well, not quite. So in honor of this flashback Thursday, we’re counting down the five Longhorn football games from the 1990s to remember.

Here they are (and yeah, Texas and Texas A&M should start playing again):

No. 3 ranked Houston, with David Klinger under center, was 8-0 and had national title hopes. Texas was 7-0 and  ranked No. 14. Texas blasted the Cougars, leading 42-10 at one point.

Also, as Austin American-Statesman reporter Thomas Jones, who was at the game, points out: when was the last time this happened at DKR:

What makes this game one to remember is that Mack Brown was the coach of North Carolina and was coaching against Texas. Priest Anthony  Holmes scored four touchdowns in this game and rushed for 161 yards. Could. Not. Be. Stopped. James Brown threw for 196 yards. Texas trailed 31-21 with 9:13 left in the game. Holmes then scored two touchdowns in the final seven minutes, the last coming with 1:17 left in the game, and Texas won the Sun Bowl 35-31 in stunning fashion. A few years later, Mack Brown replaced John Mackovic as head coach.

No. 5-ranked Texas was 9-1 at the time. Texas A&M was ranked 17th. It was tied 14-14 at halftime. With 3:46 left to play, Texas A&M scored a 32-yard touchdown by Bucky Richardson to make it 28-27. Texas A&M coach R.C. Slocum said after the game that “We didn’t come over here to tie the ballgame. A tie might have been devastating to them, but it wouldn’t have been anything close to a win for us. We never considered it. I’d do it this way 100 out of 100 times.” He went for it, but Mark Berry made the tackle in the backfield on the conversion and Texas went on to win. Texas went to the Cotton Bowl, Texas A&M won the Holiday Bowl. Watch the full game:

Ricky Williams. Ricky Williams rushed for 259 yards in this game. He became the all-time leading rusher in college football history. Texas beat No. 6 Texas A&M, who was 10-1 at the time, 26-24. Texas won in dramatic fashion. A&M scored 17 unanswered points to take the lead 24-23, but with five seconds left Kris Stockton made a 24-yard field goal to give Texas the 26-24 win. Full game.

1. Texas 37, Nebraska 27, 1996 Big 12 Championship Game
Nebraska led 27-23 with 10:11 left in the fourth quarter. Then James Brown hit Wane McGarity for a 66-yard touchdown to give Texas a 30-27 lead. Texas got the ball back, but Nebraska forced a fourth down with less than four minutes to play. Instead of punting, Texas went for it with a “roll left”:

Priest Holmes then scored an 11-yard touchdown to cap off the win. It was the first-ever Big 12 Championship game. It prevented Nebraska from defending its national championship and made a star out of James Brown, the quarterback. It was a shocking loss for Nebraska and the fourth down conversion is one of the most famous plays in Texas football history. It was so good that people don’t even really remember that Texas lost the Fiesta Bowl against Penn State.

Texas baseball notebook: David Pierce has renovation plans — for the team and the stadium

The American-Statesman’s Top 25: No. 3 Florida State