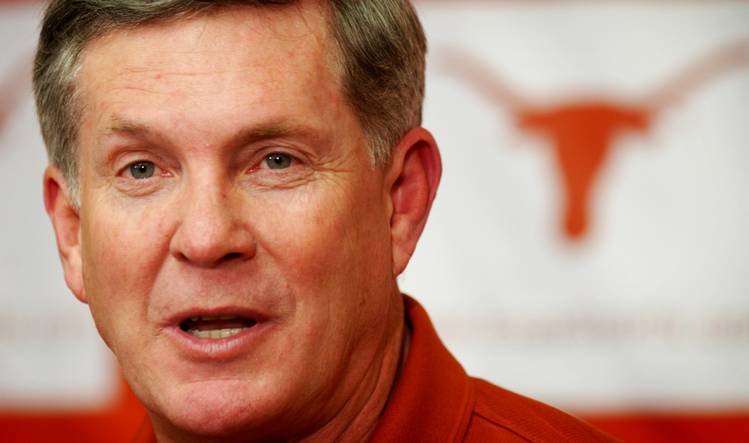 Charlie Strong is a few weeks way from starting his third summer camp. So far, Strong has found waters rough at Texas and has already had to fight for his job and changed coaching staffs. But year three has some hope. Back-to-back strong recruiting classes and a new offensive philosophy has some around the program buzzing. ESPN has one guy picking the Horns to win the conference!

Here are how the previous five Texas football coaches fared in year 3:

Mackovic had been a veteran head coach and most famously took Todd Blackledge over Dan Marino in the 1983 NFL Draft when he was the coach of the Kansas City Chiefs (wait, what?). Mackovic inherited a team that went 5-6 in 1991, and the rebuilding process was rough. He went 6-5 and 5-5-1 in his first two years. Starting the 1994 season ranked No. 19 and beating Pittsburgh on the road to start the season, Texas nearly beat Colorado (then ranked No. 4 in the country) before losing 34-31 and beat Oklahoma. He lost to Texas A&M 34-10, which pretty much made the season worthless, until the dramatic bowl win over North Carolina.

McWilliams was building to year four, when Texas went 10-2, but year two and year three weren’t pretty. After winning seven games in year one, Texas had back-to-back losing seasons, including a 4-7 campaign in 1988. Year three saw some highs. Texas beat Oklahoma and Arkansas in back-to-back weeks. Arkansas was ranked No. 7 at the time and Oklahoma was No. 15. Texas was beaten soundly 47-9 against Houston and Baylor beat Texas 50-7 in Austin! Texas A&M piled on, defeating the Longhorns 21-10 in College Station. McWilliams won 10 games the next year, but a 5-6 season in year five ended his Texas stint.

Oklahoma was ranked No. 3 in the nation when Texas beat them 16-7 in 1979. That win made the Longhorns No. 2 in the nation. That ranking was short-lived because Texas lost the next week to Arkansas 17-14 on the road. Texas beat No. 4 ranked Houston 21-13 in November and shutout Baylor 13-0 in later that month. A loss to Texas A&M 13-7 in College Station dampened the season. Texas lost its bowl game 14-7 to Washington.

That’s right. History suggests that Charlie Strong could win nine games considering three of the last five coaches won nine games in year three. Royal though is the only one to hit the triple with wins over Oklahoma, Arkansas and Texas A&M. He also beat Nebraska and a ranked Maryland team. Texas shutout four teams. The Longhorns didn’t allow a point until its fourth game of the season. Playing No. 1 ranked Syracuse with running back Ernie Davis in the Cotton Bowl, Texas lost 23-14. Royal won a national championship in year seven in 1963.

David Pierce’s goal for Texas baseball: Get to the regional

The American-Statesman’s Top 25: No. 2 Alabama