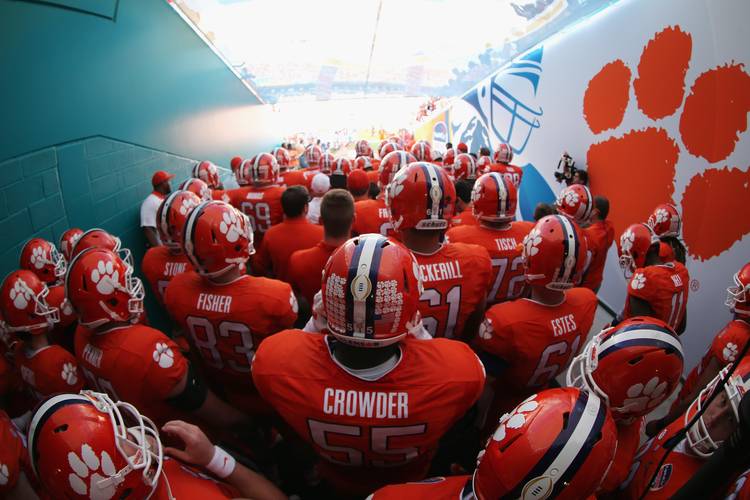 Heisman Trophy contender at quarterback? Check. A 1,500-yard rusher? Check. Dynamic pass-catcher? Check. Clemson, which fell to Alabama in last year's CFP title game, is in prime position to win it all in 2016. (Mike Ehrmann/Getty Images)

The Tigers will contend because … they have the most prolific offense in college football behind electric Heisman Trophy contender Deshaun Watson at quarterback and record-breaking running back Wayne Gallman, along with solid receivers and a strong line. The defense, with three returning starters, has to be rebuilt and offensive coordinator Brent Venables must replace his top two pass rushers as well as three starters in the backfield. A friendly schedule with seven home games should help, although Clemson has two huge road trips — to Auburn in the opener and an Oct. 29 showdown at Florida State.

Spring cleaning: Watson, a gifted athlete and terrific student, became the first Division I player to pass for more than 4,000 and rush for more than 1,000 yards in the same season and accounted for a title-game record 478 yards offense against Alabama. … Clemson did lose receiver Charone Peake, but returns senior Mike Williams, who sat out almost the entire 2015 season after injuring his neck in the opener, as well as the dynamic Artavis Scott, who has 169 career catches, including 93 for 901 yards and six touchdowns last year. … Deon Cain returns at some point, but remains on suspension after violating team rules and missing the two playoff games. He led the team in yards per reception after making 34 catches for 582 yards and three touchdowns. “He’s a guy that’s got to earn some trust back,” Dabo Swinney told reporters. “He doesn’t have any money in the bank. He ain’t back yet.” … The Tigers did lose two offensive line starters, but have one of the nation’s best tackles in Mitch Hyatt and a top center in Jay Guillermo. … Clemson had nine players drafted, including four in the first two rounds. … The Tigers will have a rugged non-conference schedule the next two years with games against Auburn and South Carolina, and play Texas A&M in College Station in 2018. … Swinney signed a six-year contract extension in April after five consecutive 10-win seasons.

Texas countdown to football: 5 coaches who were Texas assistants