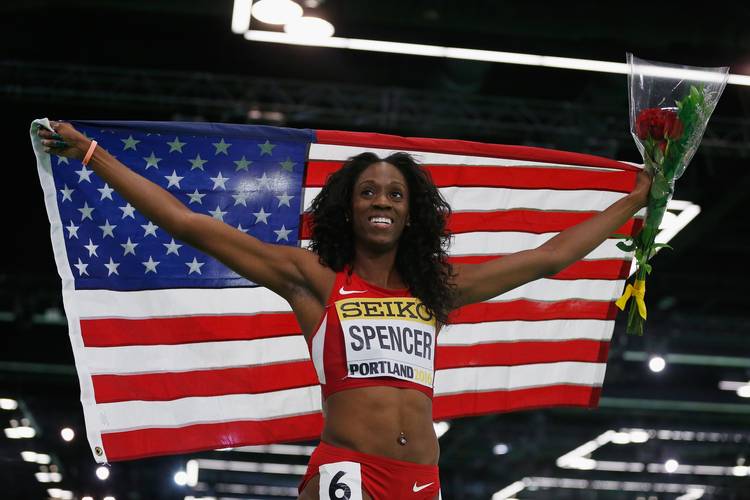 Texas Ex Ashley Spencer, shown celebrating her silver medal in the women's 400 at the IAAF World Indoor Championships this past March in Oregon, qualified for the Rio Olympics -- in the 400-meter hurdles. (Christian Petersen/Getty Images)

Though technically accurate, the story circulating in track and field circles about Ashley Spencer coming out of nowhere to make the U.S. Olympic team warrants some clarification.

Spencer, by most standards, is a novice in the 400-meter hurdles and an unknown on the world stage. She had competed in the 400 hurdles for only about three months before she secured a berth in the Rio Games. That’ll be the story line — and a rather compelling one — when the 23-year-old recent Texas graduate steps to the starting blocks for the hurdles on Aug. 15.

But in Spencer’s case, the details drive her story.

As a freshman at Illinois in 2012, a stomach virus kept Spencer from training for the hurdles, so she audibled instead to the 400 meters and, wouldn’t you know, won the first of her back-to-back NCAA titles. That summer, she won the junior world title in Barcelona, but rather than break into celebration after crossing the finish line, she plopped onto the track and looked up at her coach with a quizzical look.

“She asked me, ‘Does this mean I can’t hurdle anymore?” said Tonja Buford-Bailey, who has coached Spencer at Illinois, Texas and now as a post-graduate competitor. “That’s all she cared about. I gave her my word that I would continue to let her hurdle even though she had had that kind of success.”

Yet it didn’t quite work out that way. The following year, Spencer attempted to give hurdling another go, but got injured during a meet at LSU and was taken off of the track on a stretcher. No more hurdling.

After following Buford-Bailey to Austin in 2014, Spencer was rocked by the death of her grandmother back home in Indianapolis. Then came a quadriceps injury. It’s tough to hurdle with a physical ailment and with a broken heart, so she didn’t. The following year, she was still in physical pain, so, you guessed it, no hurdling as a senior, either.

So labeling Spencer as a newcomer to the hurdles is fair, but it’s also factual to say hurdling has been her first love all along. She made her season debut this year in early April at the Texas Relays.

“She always wanted to do it, but she couldn’t,” Buford-Bailey said. “I hated the 400 hurdles at that age, so to see someone who wanted to do that event so badly just blew my mind.”

Buford-Bailey, who won the bronze in the 400 hurdles at the ’96 Olympics in Atlanta, believes that since Spencer is still a beginner, her trajectory for improvement is higher than most and that with a tweak or two, she’ll be taking seconds off of her times. Spencer’s agent, Claude Bryan, said Spencer’s room for growth is “alarming and scary at the same time.”

With the possibility of competing through two more Olympic cycles, the 5-feet, 11-inch Spencer just might represent both the present and the future of American hurdling. Sponsored by Nike, she joked that her goal is to win enough medals that the apparel company decides to open the Ashley Spencer Recovery Center at its Beaverton, Ore. campus, where athletes can visit to get their hair and nails done.

“I think I can go much faster than what my PR is,” Spencer said. “I’m still playing around with my stride pattern, for crying out loud.”

On Monday, Spencer was due in Houston for Team USA processing to pick up her gear and smile for photos before shuffling off to South America. At the Games, she’ll be joined by a strong contingent of current and former Longhorns that includes Spencer’s good friend Morolake Akinosun (400 meter relay), as well as Michelle Carter (shot put), Marielle Hall (10,000 meters), Courtney Okolo (1600 relay) and Jamaica’s Chrisann Gordon (1600 relay). Representing the men are Ryan Crouser (shot put), Byron Robinson (400 hurdles) and The Bahamas’ Jamal Wilson (high jump). Additionally, Longhorns’ head coach Mario Sategna will assist with men’s throws, which will put him in close contact with Crouser.

If there’s a positive in Spencer coming up short in the 400 meters at the U.S. Olympic Trials — she finished seventh — it’s that she’ll no longer encounter the rigors of a taxing double. In Rio, for the first time she’ll strictly be a hurdler. If she can duplicate the personal-best 54.02 seconds she clocked at the Trials on July 10, she will likely make the finals.

“The goal is a medal,” Spencer said. “What color that medal is I really don’t care, just as long as it’s a medal.”

Yet again, she’s new to this, and with inexperience can bring unpredictable results. For instance, before Spencer went on to finish second at the Trials, she nearly got dumped in the prelims and drew the dreaded Lane 1 for semifinals. For motivation, Buford-Bailey directed her to YouTube to pull up video of Angelo Taylor’s Lane 1 triumph at the 2000 Sydney Games.

What can you expect from a rookie?