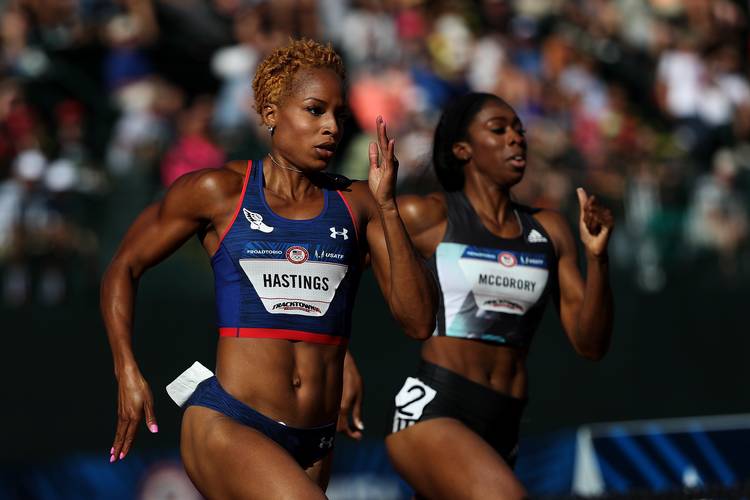 EUGENE, OR - JULY 01: Natasha Hastings (L) and Francena McCorory run in the first round of the Women's 400 Meter Dash during the 2016 U.S. Olympic Track & Field Team Trials at Hayward Field on July 1, 2016 in Eugene, Oregon. (Photo by Patrick Smith/Getty Images)

Pressed for time, Natasha Hastings fired off a text message and requested a location change for a recent scheduled media interview.

The new venue? A nail salon in north Austin.

Hastings, who’s about to try to advance her decorated running career with a second — or even a third Olympic gold medal, says she needs to not only feel good heading into the Rio Games, but also to look the part. Scrambling to get her life in order last week before starting her trek to South America, the Round Rock resident crammed in appointments to clean up her eyelashes (at 1:45 p.m.) and tighten the sides of her hair (3 p.m.).

Stretched out on a pedicure chair at a strip mall salon, Hastings kept a captive audience with the story about the time she “stalked” Texas football assistant coach Pat Moorer and convinced him to train her. Several mornings a week for the past two-plus years, Hastings has juggled her schedule around the workouts of Longhorns football players so that she can get individual time with Moorer at UT’s football facility.

But more on that later.

As her nails were drying, Hastings described her athletic motivations, acknowledging the fuel she extracts from naysayers believing the newly minted 30-year-old is over the hill, too old to compete with a younger generation of 400-meter runners. But Hastings is improving with age. She’s headed to the Olympics in an individual event for the first time after taking third in the 400 at last month’s U.S. track trials in Oregon. Facing a deep field littered with many of the world’s top competitors, she burned to the line in 50.17 seconds, finishing ahead of Texas stars Courtney Okolo and Ashley Spencer.

Retire? Heck, Hastings, who won gold in the 1600 relay at the 2008 Beijing Olympics, says she wants to stick around long enough to compete through the 2020 Games in Tokyo.

Finally, Hastings, who is known in track circles as the 400-meter Diva, touched on her passion for personal appearance. With all of the attention she could command this month, after all, it’s important to be properly groomed.

“I’ll be gone for about three weeks, so this one has to last until then,” Hastings said of her nail treatment. “It’s all a process. I’m going to be on TV.”

By now, one might be wondering why Hastings, a Brooklyn native graduated from South Carolina, is living and training in the Austin area. That arrangement came to be after Hastings, who became disenchanted with her training situation at South Carolina, decamped for Round Rock on the day after Christmas in 2011 to work with Darryl Woodson at Training Ground Elite alongside other top runners such as Olympic medalists Bianca Knight and Michael Tinsley.

With a small window to train in her new surroundings, Hastings missed a bid to the 2012 Olympics in London, but has since been on a steady incline, winning the U.S. title in 2013 and again qualifying for the world championships in 2015.

The daughter of an Olympian who missed the 1984 Games for Trinidad with a freak injury involving a wayward discus, Hastings said she feels “like I’m getting to finish what she didn’t get to finish.” Joanne Hastings, a star in the 100 meters and long jump before giving birth to Natasha in 1986, will head a cheering section of about a dozen family and friends in Rio.

As for Moorer, he won’t be there. He’s about to be busy with UT’s preseason practices getting underway this Saturday. After all, Hastings is essentially his side project.

Perpetually stone-faced, Moorer is an intimidating presence and the subject of horror stories from injured Longhorn players, who in lieu of standing on the sideline at practices are ordered to work out in Moorer’s “Pit.” Yet Hastings says she sees a gentler side of Moorer, with whom she trained under at South Carolina.

Intimidating? Not to her. In fact, when Hastings sensed Moorer  was ignoring her text messages to set up a working relationship, she “went into full stalker mode” and approached then-Longhorns linebacker Tevin Jackson with a clear directive: “Tell Coach Moorer that Natasha Hastings is looking for him.” Hastings, who joked that she gets bulky just by looking at weights, credits Moorer with helping her gain power without adding mass.

Moorer, who last granted a media interview a full year ago, declined to be interviewed for this story.

After Moorer followed Charlie Strong to Austin in late 2013, Hastings, who had soured on her strength coach at the time, thought, “Oh, you were sent by God.”

“He wanted to be sure he would be able to commit the time,” Hastings said. “It took a little bit of nudging from Coach Strong, who said, ‘Yeah, you can coach this girl.'”

Content with her training situation with Moorer and Woodson, Hastings said she plans to remain in Round Rock through the next Olympic cycle. This fall, she’ll head home to New York and host a Q&A with young female athletes. Olympic shot putter Michelle Carter, formerly of UT, will join. They’ll all get dolled up and enjoy brunch. It’ll be called “Tea Time with Tasha.”

As the nail parlor interview wound down, Hastings noticed a discolored area in the back of her dyed blonde hair. Before taking off for Rio, she had to make time for one more appointment.

“Gonna have someone do that, too, so I lied — I do have one more appointment,” she said. “But she’s gonna come to my house.”

Texas countdown to football: If you have to draft a Longhorn to your fantasy team, here are 5 to consider