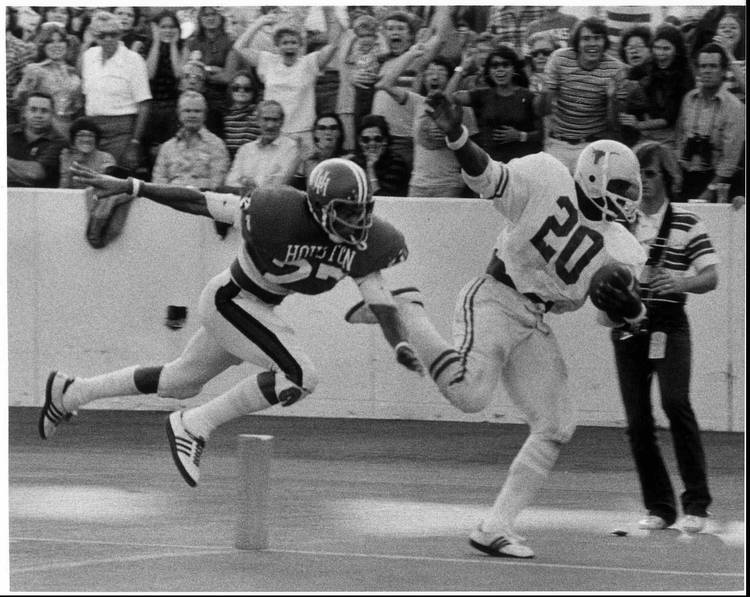 This year the Texas Longhorns are likely to be unranked in the preseason Top 25. That doesn’t mean the Longhorns won’t, but most early polls suggest the Longhorns will be where they’ve been the last two seasons, out of the polls. Seems fair since Texas hasn’t finished a season in the top 25 since 2012. But will that change this season? Here are five times Texas either started the season low in the rankings or unranked but finished in the top 25.

Here are four times Texas was unranked in the preseason and finished ranked and one time where Texas started at the bottom of the rankings but moved up.

Texas fired John Mackovic after the 1997 season in which he went 4-7. The school hired North Carolina coach Mack Brown. The team also had superstar Ricky Williams on the roster. Texas lost two of its first three games, to No. 6-ranked UCLA 49-31 and to No. 5-ranked Kansas State 48-7. Then Texas reeled off six straight wins, including a thrashing of Oklahoma 34-3 and a stunning road win in Nebraska 20-16. Williams set a school record for rushing yards in a game against Iowa State with 350 yards. He set the all-time NCAA rushing record in a 26-24 win over No. 6-ranked Texas A&M and ended the season with a 38-11 win over Mississippi State in the Cotton Bowl. Texas finished the season ranked No. 15 in the country.

This could be one of the most surprising seasons in Texas history. Probably the most (let the hyperbole happen!). Texas was 5-6 in 1989, 4-7 in 1988 and in 1986 were 5-6. Suffice to say, coach David McWilliams’ tenure was rocky, and we’re guessing after back-to-back losing seasons and entering year four, he was running out of time. His team responded with a huge win over Penn State 17-13 on the road. After losing to eventual AP National Champion Colorado at home the following game, Texas won nine straight, beating No. 4-ranked Oklahoma and No. 3-ranked Houston along the way. Texas beat Texas A&M by one point, 28-27. Texas was ranked No. 3 in the country when it played No. 4 Miami in the Cotton Bowl. Had they won that game, would Texas have topped Colorado and Georgia Tech as the national champion? Who knows. The thing is, Texas got wiped out in the Cotton Bowl 46-3. Still, considering they were unranked and reached No. 3 in the nation, pretty impressive. The final AP ranking in 1990 was No. 12.

*OK. So the University of Texas’ website says Texas’ preseason ranking was No. 18.

This site says Texas wasn’t ranked until Sept. 18 following a win over Boston College on Sept. 10 of 1977, the first game of the season.

So Texas either wasn’t ranked or wasn’t ranked all that high. But Texas finished this season a game away from winning the national championship. Texas went 11-1 in 1977, and Earl Campbell won the Heisman Trophy. Texas was ranked No. 1 in the country when they played Notre Dame in the Cotton Bowl, and the Irish handed Texas its only loss of the season, 38-10, and claimed the AP National Championship. It was coach Fred Akers’ first season, and one reason why we’re leaning toward Texas being unranked to start the season is because in 1976 Texas was 5-5-1, finished unranked and Darrell Royal retired. Texas’ final AP ranking in 1977 was No. 4.

Coming off a 7-3 season in 1958 where they finished the season unranked, Darrell Royal’s third team at Texas played above expectations. They entered the season ranked No. 17.  The Longhorns started the season with three straight shutouts over Nebraska, Maryland and California. In fact, Texas won its first eight games and reached the No. 2 ranking in America, the highest ranking of Royal’s first three seasons. They lost as soon a they moved to No. 2 (14-9 to TCU), but they beat Texas A&M and lost to No.1-ranked Syracuse 23-14 in the Cotton Bowl. They finished the year at No. 4 in the polls.

In 1956, with Ed Price as the head coach, Texas went 1-9, one of the worst records in program history. Texas responded by hiring a dude named Darrell Royal in the offseason. Royal had been the head coach of Washington and had gone 5-5 in his lone season in Seattle in 1956. Texas hired the former University of Oklahoma coach and the eventual Texas legend started his tenure in Austin. Texas was unranked but went on the road and beat Georgia 26-7 then a ranked Tulane team the next week. They finished 6-4-1 and lost the Sugar Bowl 39-7 to Mississippi, but their final AP ranking that season was 11th.