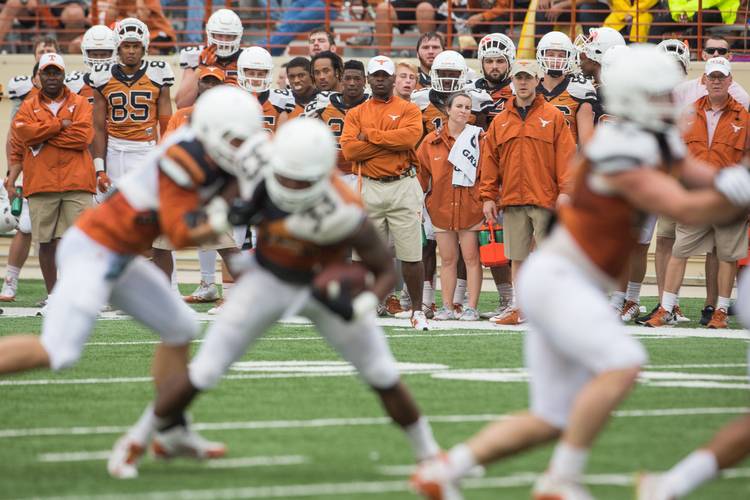 There’s not a single player on Texas’ 2016 roster with a Big 12 championship ring. A few have only Alamo Bowl rings.

Nobody in the locker room has posted a 10-win season. Many sophomores have never been to a bowl game.

When the Longhorns begin practice on Saturday, Texas coach Charlie Strong may have only one question for them: Is this team ready to win or not?

“We need to win,” senior right tackle Kent Perkins said. “We need to execute. We work way too hard to not have a great outcome.”

Players report for August workouts on Friday, and all 10 coaches will meet reporters. Workouts begin Saturday, but fans can get their first look at the team during Sunday’s open practice at Royal-Memorial Stadium. Gates open at 9 a.m. and practice begins at 9:35 a.m. An autograph session runs from 1:30-3:15 p.m. in the Red McCombs Red Zone.

Before the season opener with Notre Dame arrives on Sept. 4, Texas must answer some important questions this month aside from the obvious one at quarterback.

Will the new offense be an improvement?

Last season, Texas ran 781 offensive plays in 12 games — far and away the lowest total in the Big 12. That was an average of 65 plays a game, and it includes the other two teams that played only 12 games. Baylor, Texas Tech and TCU, meanwhile, all hovered around 1,100 plays, or about 85 plays a game. The Horns simply didn’t give themselves enough chances.

Sterlin Gilbert’s fast-break offense promises to have some get-up-and-go. During the spring, the ball was snapped anywhere from 8-10 seconds after the previous play ended.

Strong believes his players will be comfortable going at this pace because that’s what they did in high school.

How many freshmen earn playing time?

It’s always tricky to predict which top-flight recruits will walk onto the field and win a spot on the depth chart. But this is an extraordinary year, one where underclassmen will likely make up the bulk of the starting 22.

Receiver Collin Johnson, with his 6-foot-6 frame, could be a terrific playmaker. Fellow receiver Devin Duvernay may be an impact player. On the defensive side, tackles Jordan Elliott and Gerald Wilbon have flashed potential.

Could be. May be. Potential. All dangerous buzz words for players who have yet to see a single college snap.

Is linebacker really that thin?

Outside of Malik Jefferson, there’s not a single household name at the position.

Jefferson is the preseason Big 12 defensive player of the year, something he’ll be tired of hearing about soon. Tim Cole and Anthony Wheeler were backups last season. Edwin Freeman played mostly special teams.

How important is this position? Peter Jinkens was the team’s leading tackler last season (75) and Jefferson was second (61).

Can Texas produce a 1,000-yard rusher this season? Even two?

The Longhorns haven’t produced a 1,000-yard rusher since Jamaal Charles went wild for 1,619 yards in 2007. D’Onta Foreman and Chris Warren III both have game-changing size and speed. The two 250-pounders will get the chance to show it early and often.

For all the talk about Baylor’s high-flying offense, the Bears have led the Big 12 in rushing three of the last four years. If UT can average north of 250 rushing yards per game, things will be looking up.

So who starts at quarterback vs. Notre Dame?

Freshman Shane Buechele still remains the odds-on favorite, based on Strong’s tone at Big 12 media days. Tyrone Swoopes will still utilize the “18-wheeler” package in short-yardage situations. But what to do with Jerrod Heard? It seems wasteful to keep him moored to the sideline.

It’s possible fans see all three against the Fighting Irish in various capacities. However, Strong has said he’s comfortable playing a freshmen (Buechele) given how much is around him.

Texas countdown to football: If you have to draft a Longhorn to your fantasy team, here are 5 to consider

From injured to inspirational: Mino Solomon’s year-long journey is taking its next step