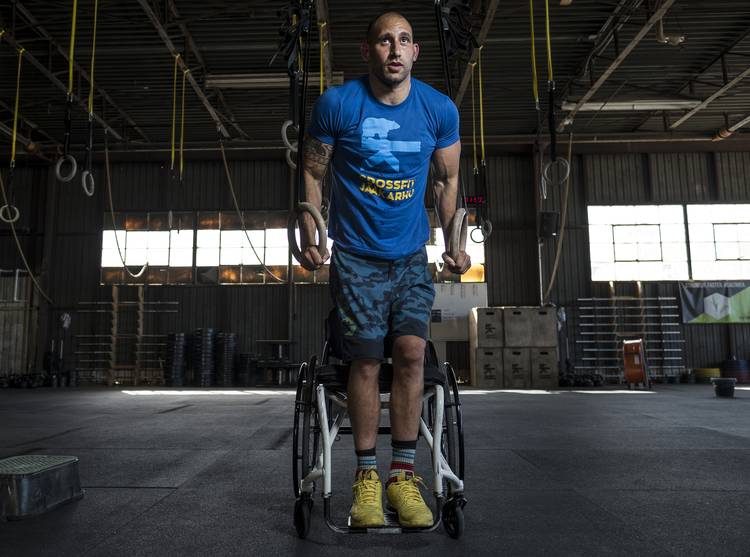 Mino Solomon, who was paralyzed from the waist down the day of the 2015 Texas season opener in a weight lifting accident, poses for a portrait at CrossFit Jääkarhu where he trains in Austin, Texas, on August 3, 2016. RODOLFO GONZALEZ / AUSTIN AMERICAN-STATESMAN

Still to this day, Mino Solomon said, he’s not totally sure what happened.

Solomon was excited for Texas’ 2015 season opener against Notre Dame. He woke up on game day in a hotel room just outside of Chicago, went to a nearby CrossFit gym for a quick workout and planned on heading to the game. As UT’s director of ticket sales and service, he was pumped like everyone else.

“It’s just something I’ve done 1,000 times,” Solomon said of what he and his friends call “the accident.”

“It felt like my hand got caught on the bar in a really weird, random way,” Solomon said. “It came down on my back. I went down, and I immediately knew something was wrong.”

A 260-pound weight bar somehow slipped from Solomon’s grasp and landed on his lower back. One of the strongest individuals you’ll ever meet fractured his 12th thoracic vertebra, resulting in almost instant paralysis from the waist down. “I noticed right away. Definitely a freak-out moment,” Solomon said. “No feeling, no movement.”

While the Longhorns were off facing the Fighting Irish, Solomon was rushed to a nearby hospital for immediate surgery. Doctors fused his 11th and 12th thoracic vertebrae together with his first and second lumbar vertebrae. All four pieces of Solomon’s spine are now held together in what doctors call a birdcage.

While retelling the story now 11 months later, Solomon wiggles in his wheelchair. Some feeling has returned in his hips. The feeling left in his wake is inspirational.

Moments after the accident, Solomon’s close friend Sharon Blecker didn’t know what to do. She called Solomon’s mother out in the Bay Area. “I got on the first plane that I could,” Suzan Aiken said.

Blecker called Max Kozinn, Solomon’s co-worker in the UT ticket department. “I got the call from her and I was in Dallas,” Kozinn said. “I was in denial. I mean, it’s Mino!”

Kozinn called Steve Hank, then working as the chief revenue officer in the UT athletic department. Hank said he was literally standing inside Notre Dame’s Main Building looking up at the mosaic under the famed Golden Dome.

“I almost instantaneously went numb,” said Hank, who notified other UT administrators hours before kickoff. “The game was, quite frankly, a complete fog to me.”

Within days, family and friends were at Solomon’s bedside after he’d been transferred to the Feinberg School of Medicine at Northwestern, which was literally across the street from the famed Rehabilitation Institute of Chicago.

Doctors told Solomon in plain fashion that he’ll never walk again. “Her delivery was blunt and, pardon my French…” Blecker said, getting worked up in the process. Well, it wasn’t positive.

Neither was the outcome at Notre Dame Stadium. Texas lost, 38-3.

“I think I checked my phone the next day,” Solomon said, “and I heard we got killed.”

Getting back to Austin

Solomon, who turned 32 in March, wasn’t the biggest kid growing up in Northern California. But he was fast. His mother always had Mino eating healthy, too.

“She would take away his Halloween candy and give him organic things,” said Danny Merchant, who has known Solomon since grade school. “His was always the worst house at Halloween.”

Kale works wonders. Solomon grew enough to play safety at Saginaw Valley State, a Division II school in Michigan. After college, he started a career in sports business, eventually becoming a ticket sales manager with the Oklahoma City Thunder. He landed a job with the Oakland Raiders in November 2012 and was excited about coming to Austin in 2014.

Along the way, Solomon worked out at various locations and got into rock climbing. One night, as he recalls, he saw a group doing late-night CrossFit. “I went over one day and got my butt kicked and thought, ‘OK, I’m into this!’”

Solomon dove headfirst into CrossFit training, even getting himself into competitive shape. But perhaps more important were the people.

CrossFit regulars are known for being a tight-knit, supportive community. Not long after Solomon moved to Austin, he would soon turn up at CrossFit Jääkarhu. The 12,000-square foot facility hidden off Industrial Ave. has no air conditioning, but the six owners got it for a song. On Craigslist, no less.

Solomon’s brute upper body strength was a major reason he blew through rehabilitation work in Chicago. That and the power of positivity. Solomon, a voracious reader, loves the parable of how a Cherokee told his grandson about the inner battle between two wolves. One is evil, the other is good. “Which one will you feed?” Solomon asked.

Paralyzed on Sept. 5, 2015. Back in Austin for the Kansas game on Nov. 7. His CrossFit family held a #Minostrong fundraiser the next day. UT staff members and his friends back in San Francisco even made an inspirational YouTube video to keep his spirits up.

Earlier this year, it was rehab work at St. David’s in the mornings, back in his UT office selling football and basketball tickets by lunch.

“When I think about Mino — and this may not come out right — I think it’s the ability to accept life and to live it,” Winchester said. “And to not make any excuses. I haven’t heard one complaint or excuse from this guy — from the hospital until I hooked up with him today.”

A contractor built a ramp so Solomon can get into his house. Friends ordered some other metal ramps off Amazon, and they installed grip bars in the bathroom. His car was outfitted with hand controls to work the gas and brake. Otherwise, Solomon’s life is normal.

“We never talk about it as a disability,” Blecker said. “He still works out. He still does everything around the house. To us, he’s not disabled. Things just take a little longer now.”

Friday is Solomon’s last day at Texas. School officials are in the process of terminating UT’s contract with The Aspire Group, the season-ticket sales and service team Solomon manages.

Members of Solomon’s 32-person team have been frantically trying to find new jobs. He’s helping them in any way possible.

Solomon brought down the house in June during an Aspire conference in Atlanta. Instead of preparing a boring sales report, he figured he’d just roll on stage and tell his story. It was a speech all about facing your fears, Kozinn said.

“He’s had a tremendous impact on my outlook on life, how I view the world and just don’t sweat the small stuff,” Kozinn said. “You complain about a missed sale or someone hangs up on you. Whatever. It’s all relative, right?”

Merchant is flying into town this weekend and will help Solomon pack up and drive to Seattle beginning Monday. A new job with the Seattle Sounders FC awaits.

“I’m not going on hikes in the woods, but everything feels normal,” Solomon said. “I’m happier than I was before. I’m independent. Don’t need help for anything. I’m back to being with all my friends and training.”

“The if is not the question, the when is the question,” he said. “I have faith, and I’m working every day toward it. If you have faith and confidence, you can do anything.”

As Texas begins fall practice, what are the Longhorns’ 5 biggest to-do’s?

The veterans vs. the rookies — five key battles as Texas camp opens