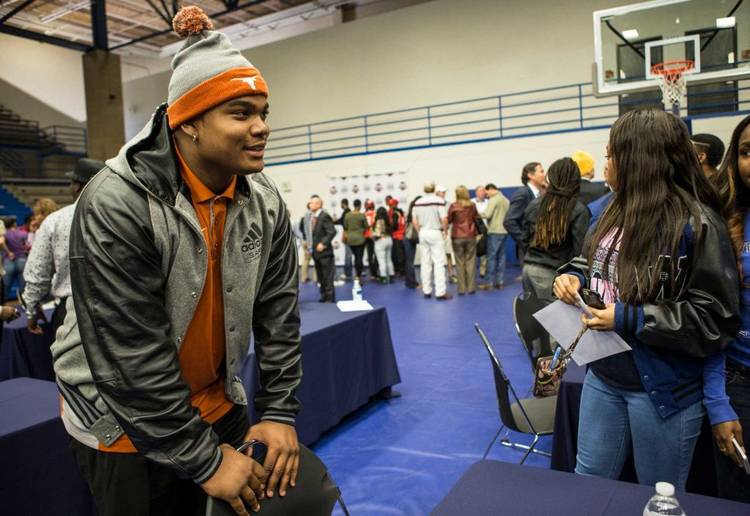 Like last season, Texas will rely a good amount on its freshman class to fill in depth and even to fight for starting spots.

Newcomers like Shane Buechele, Brandon Jones and Jordan Elliott will enter preseason camp fighting for starting jobs, yet proud veterans at their positions will put up resistance. It’ll make for some intriguing battles once practice gets underway Saturday.

Building up to the Sept. 4 opener against Notre Dame, here are five key positional matchups involving a veteran and a true freshman.

Dylan Haines vs. Brandon Jones — A tale of contrasting journeys, Haines rose the program’s ranks as a walk-on, while Jones, the nation’s top-ranked safety recruit, attracted a film crew who documented his senior season at Nacogdoches up through the moment he went on ESPN on national signing day and signed with the Longhorns. Targeting Haines’ questionable athleticism, there is a segment of the fanbase counting down the days until Haines relinquishes this spot and turns it over to someone with better speed and movement. Yet at least initially, Haines looks like he’ll continue his storybook career and build upon his streak of 23 straight starts. Another key difference between the two are their personalities. Haines, self-assured and chatty, still carries the chip on his shoulder that fueled his rise. Conversely, Jones is quiet and unassuming.

Tyrone Swoopes/Jerrod Heard vs. Shane Buechele — A battle of the known versus the unknown is trending toward the newcomer, Buechele, who through one offseason has displayed better accuracy, poise, and even leadership than his veteran competitors. As of now, it looks like Buechele will become just the fifth true freshman quarterback at Texas to start a game. Perhaps the more intriguing battle is the one to back up Buechele between Swoopes and Heard.

Lorenzo Joe vs. Devin Duvernay — This position appeared to be Joe’s before Duvernay arrived this summer along with his twin brother, Donovan, amid the unraveling of Baylor’s recruiting class. Though the list of competitors is deep, including veterans Jake Oliver and Jacorey Warrick, and freshman Davion Curtis, Joe and Duvernay look to be a cut above and between them could replace the recent combination of Daje and Marcus Johnson. Though Joe has accomplished little in two seasons (seven receptions and one touchdown), his experience will serve him against the blue-chip Duvernay.

Brandon Hodges vs. Patrick Hudson — There are many caveats here, not the least of which is the possibility of Kent Perkins sliding inside from tackle and solving a problem. Setting that scenario aside, Hudson will get every opportunity to displace Hodges, whose performance in the spring while working with the first-team fell short of a permanent appointment. Like the Duvernays, Hudson decamped for Austin this summer and found refuge from the mess in Waco, netting the Longhorns one of the nation’s premier interior linemen. Still, a rookie starting on the line in his first college game is a huge undertaking and one UT would probably like to avoid.

Poona Ford vs. Jordan Elliott — Another style clash, the diminutive Ford goes 5 feet, 11 inches and about 300 pounds, while Elliott packs a massive frame, 6-4, 318. For that reason, it could be only a matter of time before Ford surrenders snaps to Elliott and other big freshmen, including 335-pound Chris Daniels, and earns his keep as a third-down rusher. Stopping the run is a priority for Texas, and through two seasons Ford has struggled to hold up at the point of attack.

From injured to inspirational: Mino Solomon’s year-long journey is taking its next step