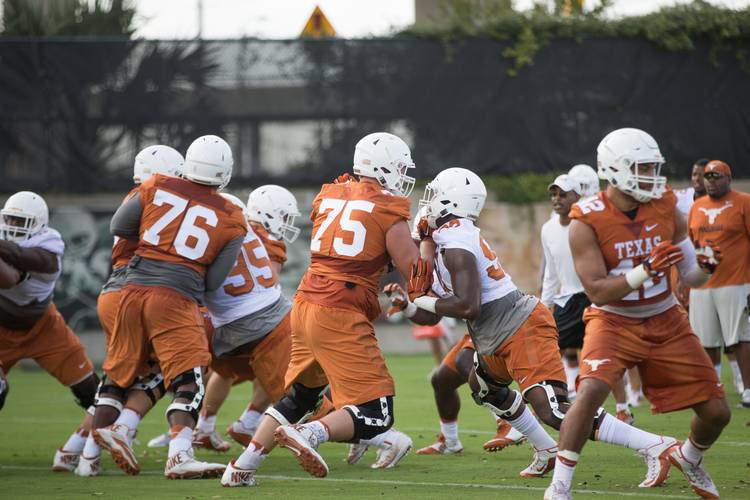 Texas offensive and defensive linemen compete in a drill at practice on Saturday morning at Frank Denius Fields.

Charlie Strong arrived this preseason looking buffer than usual, his veiny arms bursting out of his short-sleeved shirt.

Yet on Day One, the Texas football coach had to swallow some pride, unveiling a freshman class whose physiques put his 56-year-old frame to shame.

Staying true to his word from a day earlier, the Texas football coach opened camp Saturday with a team that looks “as good as anybody” and represents a significant upgrade from the undersized squads Strong fielded in his first two seasons.

“I have to recruit for size,” the coach said.

All summer long, Strong boasted of the many 300-pounders he acquired in this year’s recruiting cycle. Give or take a few meals, there are 11 of them who reach that mark, including 335-pound defensive tackle Chris Daniels.

A proponent of bringing in players who are large relative to the position they play, Strong said he values size because “big guys beat up little guys.” Yet even his little guys are stout. Safeties Brandon Jones (5-11, 192) and Chris Brown (5-9, 194) have Popeye arms, and slot receiver Devin Duvernay (5-11, 195) looks as if he can hold his own in Pat Moorer’s weight room. Pity the defensive back who steps in the way of running back Kyle Porter (5-9, 208).

Physically, this is the best looking team Charlie Strong has fielded at Texas. Good Pat Moorer development along with good recruiting.

Yet it’s not only the rookies raising eyebrows with their physiques. Offensive tackle Tristan Nickelson has tightened up and looks good at 322 pounds, while his counterpart, left tackle Connor Williams, has beefed up by about 15 pounds and now weighs 305.

The team’s collective look will be enhanced with the arrival of linebacker Erick Fowler (6-1, 240), who has yet to be cleared academically to practice.

“You have to get big because that’s where you’re going to win games,” Strong said. “If you can’t put pressure on people, if you can’t block people, you don’t have a chance.”

All signs suggest Texas’ QB battle is a two-man race