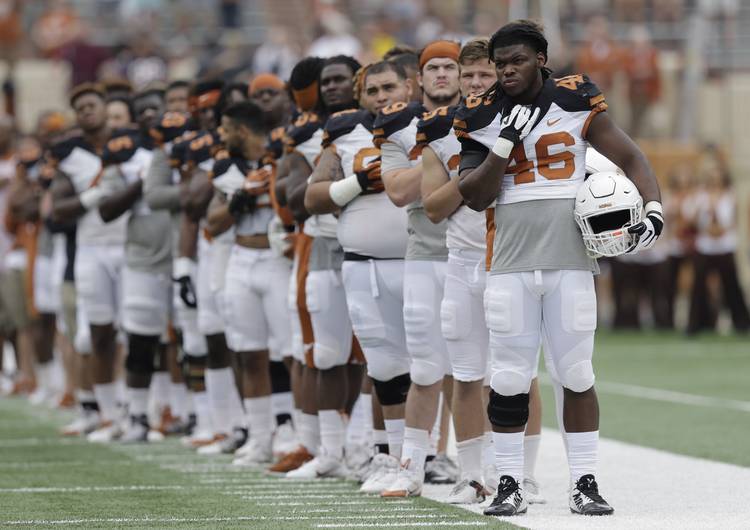 Malik mania has come so far, so fast, that the Texas coaches might be looking for the brake handle. This train’s going to be hard to stop.

Recruiting services labeled Malik Jefferson the No. 1 recruit in Texas in 2014. The next year, the 6-foot-3 linebacker became a freshman All-American in his first season with the Longhorns.

Now heading into his sophomore campaign, Jefferson was tabbed the Big 12’s preseason defensive player of the year.

Mix Jefferson’s on-field success with unmistakable hair and a wise-beyond-his-years personality, and you’ve got a star. He’ll be a fan favorite during Sunday morning’s open practice at Royal-Memorial Stadium and a key cog in UT’s defense all year long.

Just ready for everything to go away and focus on (🏈)

But to say Jefferson has become the face of the program, well, that’s where UT coaches turn cautious.

“So much is expected,” Charlie Strong said. “You try to tell him, ‘Listen. Don’t feel like that you have to become the face of this program. Don’t feel like the expectations aren’t there, but just don’t feel like it’s all on your shoulders. On defense, there are 11 guys out there. You are only one of 11.’”

Linebackers coach Brian Jean-Mary was more blunt and said he would “never put that type of pressure on a young man.”

“I think he’s handled it well,” Jean-Mary said, “but my personal opinion, I would rather focus on the team.”

UT officials are well aware that Jefferson is a wanted man — by classmates, fans and reporters, too. He hasn’t spoken to the media since spring practice. But his thoughtful persona shines on social media, and he has no tolerance for anyone who questions whether the Horns will win again.

“Age and classification means nothing when you step on the field,” Jefferson tweeted earlier this year. “Because you play just like they do.”

Jefferson isn’t afraid to wade into social issues, such as when a gunman killed five Dallas police officers in July. In response, he and teammate Charles Omenihu attended a public forum with Austin police that addressed race relations.

“I don’t care what people say to try to justify #opencarry and what it means, all I can see is people walking around with guns on them,” Jefferson tweeted.

Jefferson’s best ploy now might be to speak with his helmet. The coaching staff plans to keep him at middle linebacker instead of putting him outside as a pass rusher.

Jean-Mary said the best linebackers stay in the middle so they can go either way. In college, it’s too easy to neutralize players who line up on one side or the other.

“You guys watch Big 12 football,” Jean-Mary said. “All they’re going to do is run the other way or use slide protection on him, and now you’ve just eliminated a kid that we think can be a dominant player.”

It’s possible the Longhorns will have to play Jefferson in the middle because there are no other solid choices for such a pivotal position. Middle linebackers generally lead the team in tackles and wind up on the bottom of many pileups.

“The coaches, they look at our strengths and our weaknesses and want to utilize us to be the best we can be,” Cole said. “That’s the lineup they see, so we’re going to grow with it.”

Just don’t expect anyone in the football building to let Jefferson’s head grow too much.

“He knows with me when he walks through the door, he’s Malik Jefferson, the linebacker,” Jean-Mary said. “I’m never going to treat him any different.”