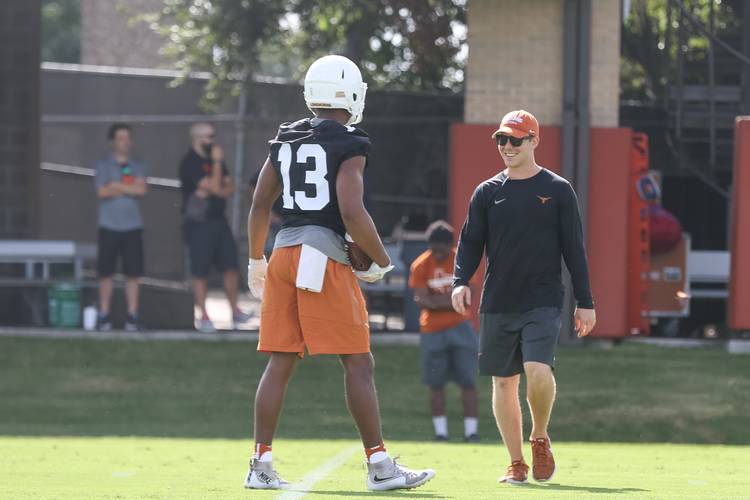 Texas quarterback Jerrod Heard talks to a coach after throwing a pass on Saturday morning at Frank Denius Fields.

Though it was just one practice, it looks as if Texas’ quarterback battle is now a two-man race and returning starter Jerrod Heard has fallen behind the co-leaders.

Heard worked mostly with the third team on Saturday, leaving the first-team reps to Shane Buechele and Tyrone Swoopes. Additionally, many of Heard’s snaps were designed quarterback runs, fueling speculation that he could be used in a wildcat role rather than as a traditional passer.

Of the perceived finalists, Buechele outplayed Swoopes in 7-on-7 and 11-on-11, launching a deep strike to John Burt (over Donovan Duvernay) and hitting Andrew Beck down the middle of the field. Conversely, Swoopes misfired on several throws, but did connect on a bomb to freshman Reggie Hemphill-Mapps.

Quote of the day: After running back Tristian Houston burst up the middle for a long run, a teammate said to no one in particular, “I didn’t know Tristian could run that fast.” Quick on his feet, offensive tackle Tristen Nickelson cracked, “All Tristens are fast.”

Joking aside, Houston (5-11, 205) probably has greased his wheels after dropping 20 pounds since the spring. Running backs coach Anthony Johnson said Houston set forth “on a warpath” to return to his weight from high school when he ran the 100 meters in 10.99 seconds at Galena Park North Shore.

Short yards: Running back Chris Warren sat out with what Strong called a tweaked hamstring. It’s thought to be minor. … Candidates for punt returner are Hemphill-Mapps, Armanti Foreman, Warrick, Devin Duvernay and Holton Hill. Duvernay was the most consistent of the bunch. … In high school, freshman tight end Peyton Aucoin caught exactly two passes, yet he looked comfortable in 11-on-11, hauling in a couple of passes on the same drive. … Tight ends coach Jeff Traylor is working with inside receivers.

Texas countdown to football: 5 Longhorns from Houston to remember