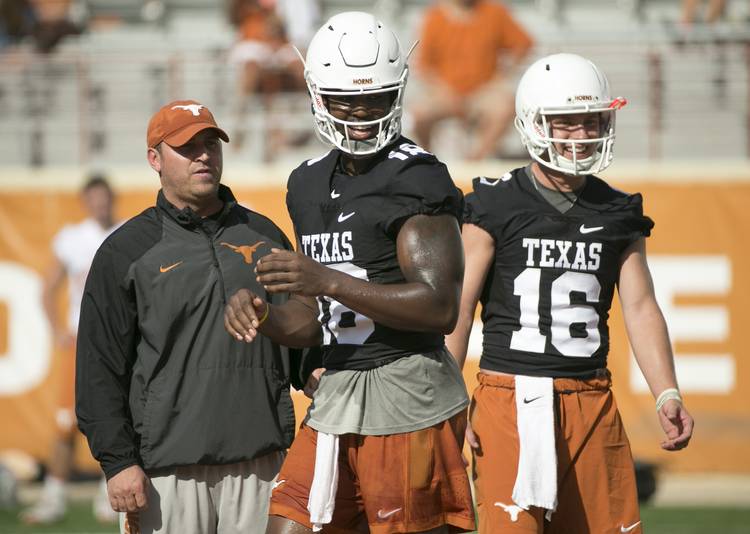 Matt Mattox was a senior offensive lineman at Houston when Art Briles arrived prior to the 2003 season. The Cougars heard all kinds of hype about Briles’ high-flying offense and couldn’t wait to start learning.

“We started doing some walk-throughs and stuff, and the coaches were telling us, ‘Just trust us,’” the Texas offensive line coach said. “What play are we running? Just do what we tell you. We were just doing it as they’re telling us.

“That was the first time I really got introduced to not using a playbook.”

No playbook? No three-ring binder of Xs and Os? Nothing to take home and study?

Old-school purists will cling to their erasers and chalk, but this is what coaching looks like in 2016. Texas offensive coordinator Sterlin Gilbert and Mattox are installing an offense without using playbooks.

What once was considered kooky within the coaching profession is now mainstream.

“When I got in coaching, this was so far beyond my mind,” Traylor added. “But now that I’m a part of it, it’s exciting. You’re on your toes all the time.”

There may not be reams of paper with scribblings and squiggly lines. However, there is plenty of organization. Receivers learn the traditional route tree — everything from “go” verticals, ins, outs and comeback routes. The blocking protections are simple and somewhat straight-forward.

The secret lies in the pre-snap formations. Mike Leach and Briles have enjoyed incredible offensive success through the years by taking a handful of plays and disguising them with pre-snap motions, forcing the defense to adjust on the fly and possibly guess incorrectly.

Leach and Briles believe in attacking every inch on the field. Under Gilbert and Mattox, outside receivers line up beyond the numbers, literally just two or three steps off the sideline. That pushes corners further out onto an island, making one-on-one battles more likely.

Now, add in some offensive line wrinkles. Allow the guards or tackles to pull and trap block. Senior Kent Perkins has already mentioned how excited he is moving inside to guard specifically so he can pull and trap defenders.

Gilbert does not carry a play card. He wears a headset and tells graduate assistant Jordan Traylor, Jeff’s son, what play to call. Jordan Traylor makes literally one or two hand motions to the quarterback on the field and that’s it.

“Sterlin and Matt know this offense inside and out,” receivers coach Charlie Williams said. “They’ve showed us the statistics of what this offense has done from year to year in the places they’ve been. If we just execute it the way we know how and not turn the ball over, then it’s going to be real good.”

The quarterbacks are instructed to get the ball, look for their prime targets and get rid of it. Gilbert does not want them thinking.

“When you start to minimize the thinking process,” Gilbert said, “it allows you to go faster.”

Grantland once said that Baylor’s offense under Briles was “less about executing football plays and more about waging psychological warfare.” But it still took Briles a few years to really get rolling. Even with future Heisman Trophy winner Robert Griffin III at the controls in 2008, the Bears averaged just 28 points per game and went 4-8.  Baylor jumped to 31.2 points in 2010, 44.5 in 2012 and 52.4 in 2013.

“People do not pay money to come to a game and watch a slowdown offense,” Briles told Grantland. “If they go to the restroom, I want them to come back and say, ‘What happened while I was gone?’ They will miss something if they leave the game.”

Is that what Texas fans can expect this season? During Saturday and Sunday’s practices, the offense ran plans generally within 10 seconds.

Charlie Strong is eager to see deep balls — like Saturday’s back-to-back throws to Reggie Hemphill-Mapps and John Burt — and then see a 250-pound running back ram his way up the middle. “It’s going to be a good problem to have,” Strong said.

Just don’t expect Gilbert to reach deep in his playbook when things get tough. There isn’t one.

“I can see the method to the madness,” Traylor said. “It makes all of us be on point.”

What we saw: Beefy defensive tackles getting plenty of work for Texas

Texas countdown to football: 5 sets of brothers to play for the Longhorns