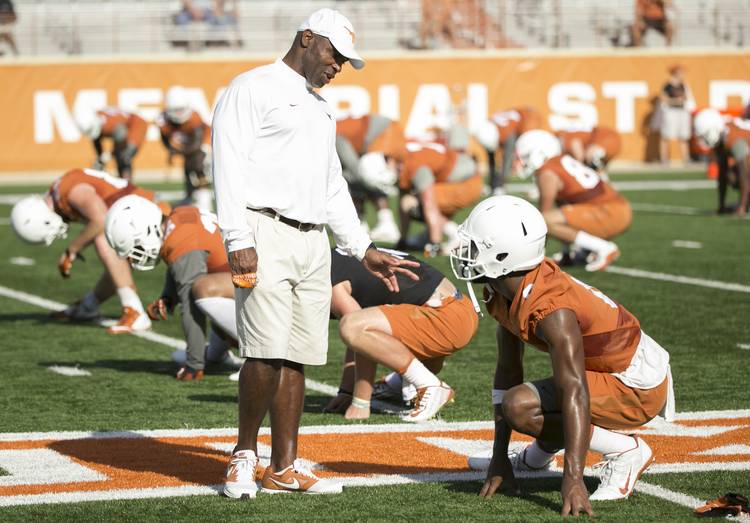 Texas officials allowed reporters to watch two practices over the weekend. Here’s a look at what we saw defensively.

A couple of those massive freshmen Charlie Strong has been raving about need to improve their conditioning.

That’s not our opinion, but the opinion of strength coach Pat Moorer, who ordered 335-pound Chris Daniels off the field to run stadium steps at the southeast end of Royal-Memorial Stadium. Moorer ran with Daniels. After practice, Moorer kept Marcel Southall and had him run 50 yards to midfield and back. Southall, who weighed 287 pounds on signing day, is now up to 327. That’s a 40-pound gain in six months.

Most concerning is what appears to be a lack of playmakers at defensive end. Someone needs to disrupt the pocket out of Bryce Cottrell, Charles Omenihu and Andrew Fitzgerald.

Linebackers coach Brian Jean-Mary was asked his thoughts about “The Shark.” That did not go over well.

“Well, first of all, we don’t call him The Shark. We call him Jeffrey McCulloch,” Jean-Mary shot back. The de-recruitment process has begun.

McCulloch, one of the nation’s top outside linebacker recruits, was on the receiving end of some serious tail-chewing at times this weekend. But he’s got tremendous talent, as evidenced by an interception of Jerrod Heard during Sunday’s practice.

If Anthony Wheeler, Tim Cole and Edwin Freeman are going to keep playing on the edges, they need to make some plays. In these controlled environments, it’s difficult to tell how they did. Linebackers aren’t allowed to take runners to the ground.

At middle linebacker, Malik Jefferson should make a ton of garden-variety tackles. If he doesn’t, this defense has huge problems.

It’s easy to tell when defensive backs get beat. But you can also tell when they’re playing tight coverage and making life difficult for the offense.

Kris Boyd did that over the weekend. Holton Hill and Davante Davis both had highlight moments. Sheroid Evans, who simply refuses to give up despite numerous knee injuries, will be on the field in nickel situations.

At safety, Dylan Haines and Jason Hall continued to patrol the middle of the field. Haines had an interception on Saturday, and lest anyone forget, the one-time walk-on has had nine the last two seasons.

If this new offense sputters, at least there’s a good punter to get them out of trouble. Michael Dickson has been unleashing booming shots with consistency, and at one point Sunday delivered a shot of 60-plus yards. And the hang time was good, too.

Placekicker Trent Domingue has been OK, making most of his field goal attempts but also clanking a couple off of the left upright. No matter what happens between now and the opener, the LSU transfer has the job sewn up.

Multiple players are auditioning for punt returner, but the smart money is on freshman receiver Devin Duvernay, who ran 100 meters in 10.27 seconds to win the Class 6A state title in 2015. Duvernay’s getting competition from Jacorey Warrick, Armanti Foreman, Reggie Hemphill-Mapps and Hill.

We’ve yet to see kickoffs, so there’s no telling who will be back for returns.

What we saw: Shane Buechele showing more consistency at QB