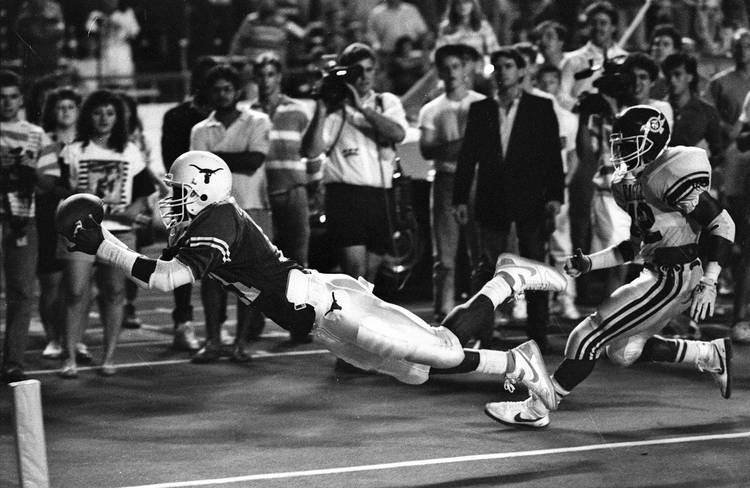 When Devin and Donovan Duvernay decided to come to Texas earlier this summer, they weren’t the first set of brothers on the roster. Collin and Kirk Johnson, sons of Texas Hall of Honor member Johnnie Johnson, were on the team. So were D’Onta and Armanti Foreman. Three sets of brothers on one team. They say the best teams are the ones that act like a family, so coach Charlie Strong is really taking that to heart.

But those three sets aren’t the only siblings to ever play on the same Longhorn team together. And the Johnsons aren’t even the only brother tandem who are also sons of a Texas Hall Honor member.

Here are five sets of brothers to play on the same Texas team:

Sam Acho was a senior and Emmanuel Acho a junior in 2010. They appeared on the roster for three years in a row before Sam graduated in 2011. They were both members of the 2009 Big 12 Championship team and both  went on to play in the NFL, with Sam establishing himself in the league with the Arizona Cardinals and Chicago Bears. Sam was an All-American in 2010, while Emmanuel was a solid contributor for the Longhorns. Both came from St. Mark’s School, a private school from the Dallas area that has won six state championships in water polo. Some other famous St. Mark’s alums: Oscar winner Tommy Lee Jones, actors Owen and Luke Wilson and Boz Scaggs and Steve Miller. True Story.

Marcus and Michael Griffin were twins hailing from hometown school Bowie High School. Michael, a first round NFL Draft pick in 2007, still plays in the NFL today while Marcus led the Longhorns in tackles his senior year. Michael was a stud coming out of Bowie. He was the ninth-rated cornerback prospect in his recruiting class and a four-star recruit. But Marcus was a find by the Longhorns. He started his career as a walk-on and finished with 227 tackles and six interceptions. Michael is a two-time Pro Bowler and recently signed with the Vikings and is the eighth all-time tackles leader in UT history with 368.

Kerry and Keith Cash were twins from San Antonio Holmes High School where they were standout football, basketball and track stars. Rumor has it the Cashes’ intramural basketball team on the 40 Acres was unbeatable. Against Oklahoma in 1990, Keith caught the game-winning, 16-yard touchdown from Peter Gardere with two minutes left to give Texas a 14-13 lead that stuck. Kerry also had a touchdown in that game, leaping one over Oklahoma defensive back Darnell Walker in the endzone. In that game against Oklahoma, the Cashes combined for five catches, two touchdowns and 60 yards. Keith finished with 33 receptions and six touchdowns in 1990, his brother Kerry had 22 catches and four touchdowns. Kerry was a fifth-round pick in 1991 NFL Draft and caught nine touchdowns in from 1991-1996 with stints with the Colts, Raiders and Bears. Keith played from 1991 to 1996 after being taken in the seventh round. He caught 49 touchdowns from 1991-1996 with the Steelers and Chiefs.

Defensive coordinator Mike Campbell was a coach at Texas from 1957-1976. From 1966 to to 1973, his kids played for Texas. Tom had two interceptions against Tennessee in the 1969 Cotton Bowl as a junior and was named Outstanding Defensive Player. But Tom’s most famous Cotton Bowl moment came in 1970 against Notre Dame when he picked off Joe Theismann with 38 seconds left in the game to seal the win for the Longhorns and clinch a national championship. His twin, Mike, was also defensive back. Here’s what Tom told the University of Texas website about playing with his brother:

“Where it became a big deal was when one day – I played on the left side of the defense and [Mike] was on the right – when I was junior, I got promoted up to first team as a rover back because the guy in front of me got injured. Honestly, Mike was probably a better player at the position, but Mike played on the right side and my father did not believe in rotating or switching back and forth. It is different. It was like you had to be ambidextrous.”

Tom is in the Cotton Bowl Hall of Fame. The twins’ younger brother, Rusty, joined the team the next season. All three went to Austin Reagan High School.

Diron, Don and Charles were all Longhorns. While all three were never on the team at once, Don and Charles played together as sophomore and senior in 1961. and Diron and Don then played together two years later. The Talberts arrived from Texas City, and all were either offensive or defensive linemen. In 1962, Charles was by himself. Then Diron was officially on the roster as a sophomore (remember, no freshmen were on rosters back then). All three are in the Texas Hall of Honor. Charlie joined in 2007, Don in 1992 and Diron in 2005. Don played in professional football from 1962 to 1974 and won a Super Bowl. He was an All-American in 1961 and an All Southwest Conference player in 1961. He also missed two seasons of pro ball as he served in the Vietnam War.

Charles, or Charlie, was a 6-foot-5-inch defensive end that helped the Longhorns win the 1963 National Championship.

Here’s what Charlie told the University of Texas athletic website about joining his brothers in the Texas Hall of Honor:

“It is certainly a big honor to join them. They both were extremely excited. I was lucky enough to play with both of them during my career. It is something we have a lot of pride in, now that the three of us will be in the Hall of Honor.”

Who’s Texas’ next breakout senior? A handful are in line to break out