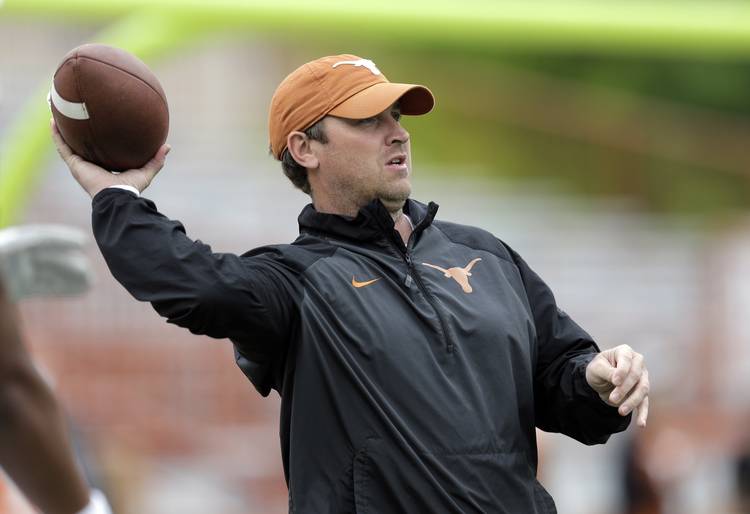 A lot of well-deserved buzz has been surrounded new Texas offensive coordinator Sterlin Gilbert and his arrival at Texas. He doesn’t use a playbook, yeah, seriously, and he used to coach just up the road at Temple High School. He’s a quarterback whisper of sorts, and considering there always seems to be whispers about who the Longhorns’ quarterback should and shouldn’t be, Gilbert’s arrival is just in the nick of time.

Here are five quarterbacks who have excelled while playing under Sterlin Gilbert (ranked from most recent):

The junior from Sanger, Texas threw for 4,332 yards and 25 touchdowns last season for the Golden Hurricanes. He enters 2016 as a Davey O’Brien National Quarterback Award candidate. In 2015, Evans threw just eight interceptions in a career-high 485 attempts. He completed 63 percent of his passes, an eight percent increase from before Gilbert. Under Gilbert the returning starting quarterback set career-highs in: Games played, completions, attempts, yards, touchdowns, average yards per play, average yards per game and even rushing yards.

After starting quarterback Matt Johnson, who was the Mid-American Conference (#MACtion) Offensive Player of the Year in 2015, went down with an injury, Gilbert and staff turned to back-up Knapke. All he did was throw for 3,173 yards (seventh-best in Bowling Green history) and complete 280 passes. He averaged 259 yards per game. The offensive in general had a great year that culminated with a bowl victory.

Yeah, the guy the New England Patriots drafted to eventual replace Tom Brady. Garoppolo won the Walter Payton Award in 2013, or basically the FCS’s version of the Heisman. In 2013, Garoppolo threw for 5,050 yards and 53 touchdowns. That’s right: 53.  He was third in the country in passing efficiency and was naturally his conference’s offensive player of the year. In the two years that Gilbert was his coordinator, Garoppolo threw for 8,873 yards and 84 touchdowns.

In 2011, Gilbert was the offensive coordinator and quarterback coach at Temple High School. As a junior in 2011, Allen threw for 1,753 yards and rushed for 766 yards. After that season, Allen’s recruiting stock soared. To be fare, this was only in part because of his strong junior season but also because of his senior  season where he threw 24 touchdown, passed for 1,175 yards and rushed for 941 yards. Eventually the No. 67-ranked player in the country chose TCU and in June moved to Rutgers as a graduate transfer.

Yes, we skipped over Gilbert’s tenure as the head coach of San Angelo Lake High School from 2008-10 and as an offensive coach at Abilene Cooper High School (2006).

Kolb was the first quarterback that the Art Briles system turned into a star and eventual NFL draft pick out of Houston. Gilbert’s job in 2005 as a graduate assistant was to assist with quarterback and running backs. So, yeah, maybe wasn’t doing that much in 2005 to help Kolb, but he did take part in the 3,258 yards, 19 touchdown season Kolb had. As a junior, Kolb completed 60.5 percent of his passes.

Who’s Texas’ next breakout senior? A handful are in line to break out

Texas countdown to football: The 5 most recent UT vs. Top 10 non-conference games