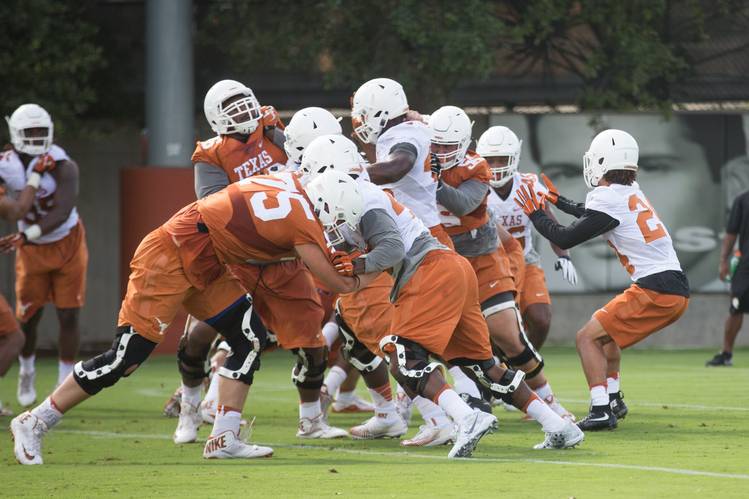 Texas offensive and defensive linemen compete in a drill at practice on Saturday morning at Frank Denius Fields.

If judged solely on sheer bravado, this is the best group of freshmen defensive linemen Texas has ever had. Or so they believe, anyway.

If Steve McMichael, Kenneth Sims, Casey Hampton, Rod Wright, Malcom Brown or any of you other former All-Americans are reading this, it’s best to look away.

“History’s going to be made in Austin in a couple of months,” the confident Chris Daniels said in March. “We’ve got Notre Dame and we’ll get our revenge. Coach Strong has set something nice up.”

Jordan Elliott thought the equipment manager must’ve made some mistake. “I put him in 55. I said, ‘That’s a good number for you,’” Texas coach Charlie Strong said. “I think he wanted 56 thinking he was Lawrence Taylor.”

The defense badly needed healthy doses of size and athleticism up front. By all accounts, the six freshmen signees arrived rip-roaring and raring to go. But which ones will still feel talkative after a grueling August training camp?

Elliott and Gerald Wilbon — weighing 318 and 329 pounds, respectively — earned early praise from fifth-year senior Paul Boyette. D’Andre Christmas, Andrew Fitzgerald and Marcel Southall all are learning the ropes. Daniels has been held out of drills with a minor injury, but he’s expected to dive in soon. None will be made available to reporters anytime soon.

Tracking each players’ individual accomplishments in August isn’t Haley’s top priority. The 28-year veteran defensive assistant simply wants to shore up the unit’s overall depth. In a perfect world, Haley said defensive tackles would play 30 snaps per game, not 50 or 70.

“At the end of the day, in the fourth quarter, those guys still have some juice,” Haley said. “That’s the key.”

That’s welcome news to Boyette, Bryce Cottrell, Poona Ford and other veterans that got worn down to the nubs last season. How else to explain Texas’ shoddy numbers against the run? Last year, the Longhorns allowed more than 200 rushing yards per game for the first time since 1997 — John Mackovic’s ill-fated final season as head coach.

That’s not to say the defensive line has been devoid of talent. After the 2014 season, Brown became a first-round draft pick with the New England Patriots. This past spring, Hassan Ridgeway was a fourth-round draftee of the Indianapolis Colts.

The defensive line, just like its offensive counterpart, simply hasn’t had enough depth in recent years to remain fully functional for 12 games.

That’s why it was critical Strong and Haley recruit defensive linemen in quantity and quality.

The freshmen aren’t the only ones who will get plenty of chances this month. The coaching staff is hoping for a huge leap out of sophomore Charles Omenihu. Linebacker Breckyn Hager was moved to defensive line to add another pass rusher capable.

The depth chart won’t come into better focus for a few more weeks. But anyone who can stuff the middle and control the line of scrimmage is welcome to apply.

“As a D-line coach, you always want more,” Haley said. “If we can get to a point where we could play nine or 10 guys, I would love it.”

Texas’ sophomore class should produce a whole bunch of starters

Texas countdown to football: 6 Longhorns in a hall of fame