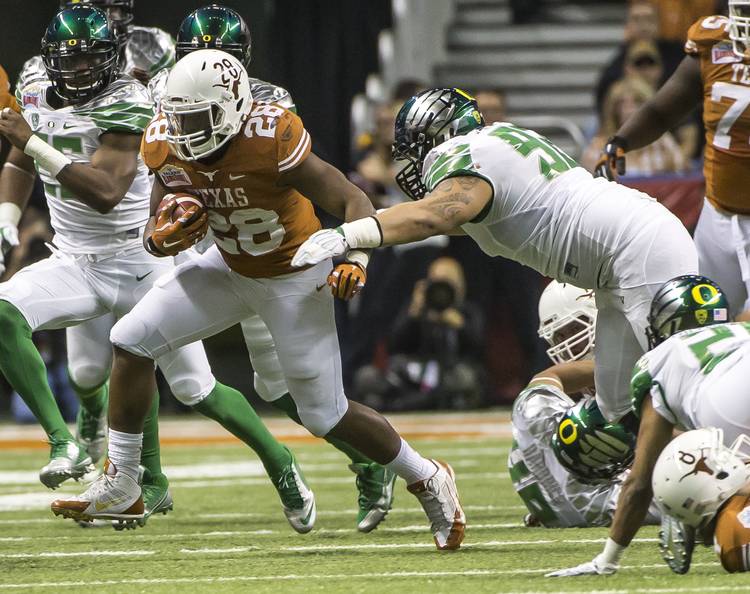 When the season starts next month, Texas is likely hosting a top 10 team, possibly a top 5 team, in Notre Dame. Early polls view the Fighting Irish as a College Football Playoff contender a year after being just left out of the of the field. We’ll see.

So that got us thinking: When was the last time Texas played a top 10 team not from the Big 12?

The Ducks were not a consensus top-10 team on Dec. 30, 2013. They were the AP’s No. 10-ranked squad and the coaches’ poll’s No. 12. We’re sticking with the AP ranking. This was the last game Mack Brown ever coached at Texas. He had announced this retirement/resignation/preemptive-you-don’t-fire-me decision a few weeks earlier and not many people held much hope for the talented, high-powered Ducks led by future Heisman Trophy winner Marcus Mariota. The quarterback torched the Longhorns for 133 yards on the ground and 253 yards through the air. Malcolm Brown rushed for 130 yards for Texas, but it was Case McCoy who scored Texas’ only touchdown that night.

Colt McCoy got hurt in the first half. Garrett Gilbert came in. Alabama, with Heisman Trophy winner Mark Ingram, led 24-6 at halftime and Texas couldn’t overcome the deficit. Gilbert, facing one of the best defenses Alabama has ever had, threw four interceptions. McCoy had just two pass attempts, in what was the worst case scenario that could ever happen for Texas. Alabama won in Pasadena and the Longhorn program spiraled out of control following this game.

I grew up in Cincinnati, Ohio. My brother and many of my best friends went to Ohio State. Here is what I remember most about this game:

My friend Bob Strickley  and I are in my mom’s basement watching the game on the big screen. Me being a student from Kent State, I had no dog in this fight. Bob being a student and season ticket holder of Ohio State, he did. Ohio State takes the lead with about two minutes left and Bob is extremely nervous because he didn’t like Ohio State’s defense.

Texas quarterback Colt McCoy leads the Longhorns down the field with passing play after passing play, mostly connecting on inside routes.

With 26 seconds left this is what happened:

Me: Relax, they need to score a touchdown and they’re 26 yards away from scoring with 26 seconds left.

A year before this game, Texas beat Ohio State in Columbus and went on to win the BCS National Championship. Ohio State fans, remember I know a few, were looking forward to the rematch because many feel that the home loss to Texas kept the 2005 Buckeyes from winning it all (not sure if they could beat that USC team, but we’ll get there). Texas entered the season ranked No. 3 despite a freshman quarterback taking over for Vince Young. That freshman quarterback was Colt McCoy. Ohio State would play for a national championship that year and it started its march by this impressive road win. Would-be Heisman Trophy winner Troy Smith threw two touchdowns with 269 yards and Texas had little answer for Ted Ginn, Jr. (five catches for 97 yards) and Anthony Gonzalez ( eight catches for 142 yards). Texas managed 326 yards and allowed just 348  but two turnovers hurt their chances at winning.

For more on this game, I refer you to all our awesome coverage done last season on the 10 year anniversary of this game.

Here is the game:

Texas’ sophomore class should produce a whole bunch of starters